During the television industry’s upfronts earlier this month, NBC Universal’s SyFy network announced several new series in development, and we thought one of these might be of particular interest to haunt fans:

Fantasy Makers is a family docuseries following the loud, energetic, and colorful cast of characters who own and operate one of New York City’s premiere haunted attractions, Blood Manor. When they’re not scaring up city dwellers, the cast is out planning wild-themed events for clients, allowing their most extreme and imaginative fantasies to come to life.

Blood Manor is an extremely well-known haunt in the middle of New York City. In addition to its run during the Halloween season, the haunt opens periodically at other times during the year, most often for a “Bloody Valentine’s Day” event.  The haunt is very long, with many different rooms and themes as well as first-rate, enthusiastic acting talent.

There is no airing schedule available for the new series as yet, but we imagine they’d get the largest audience during the Halloween season. We’ll be sure to set our DVRs for this one! 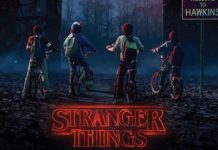 Things will be Stranger at Universal’s Halloween Horror Nights 2018