This teaser had many HHN fans excited and speculating as to what these messages could be revealing. The comments featured guesses such as Freddy coming back, Slenderman, and even Freddy Vs. Jason. However, it was soon learned that these where hints to just stay up late on Sunday night as in the middle of the night, via USA Today, Universal revealed that the Dead will continue walk at both parks for an unprecedented 3rd year in a row with the return of the The Walking Dead themes. This time around the mazes will feature elements from season 4 (which didn’t differ much from the settings of season 3). Both parks will also feature more of The Walking Dead zombies in scare zones. 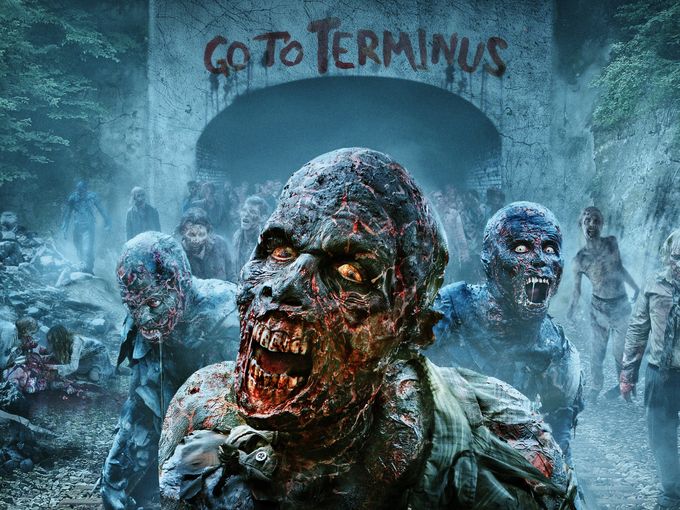 As everyone knows, the Golden Globe–nominated, Emmy Award–winning series The Walking Dead is based on the comic book written by Robert Kirkman and published by Image Comics. The series tells the story of the months and years following a zombie apocalypse. It follows a group of survivors, led by police officer Rick Grimes, who travel in search of a safe and secure home. Universal Studios’ Halloween Horror Nights’ creative teams are working with AMC and The Walking Dead to once again recreate these authentic experiences that are true to the hit series.

In Orlando, The Walking Dead will get yet another all new designed maze that will also be the largest maze in HHN Orlando’s 24 year history. They say it will be double the size of any maze featured before with the largest horde of scareactors ever cast inside of a single maze.  The maze will feature scenes from season 4 including the prison and zombie filled country club (maybe there’ll be some booze fro those you make it to the end).

In Hollywood, The Walking Dead: End of the Line, you’ll follow in the footsteps of the human survivors on the show as you flee the overrun prison and enter a nightmarish landscape searching for a promised new safe haven (Terminus) that may not be all that it seems. It sounds like they will rework the prison sets that were featured in last year’s maze and perhaps add the Terminus tunnel at the end. The Walking Dead will also ‘Invade’ the Terror Tram once again, where we expect (know) that the zombies will be stumbling around the Bates Motel and War of the World sets on the Universal backlot.

We’re sure for HHN fans there’s a mixed opinion as to whether this is exciting news or not. This doesn’t come as surprise to us as The Walking Dead is one of the most watched television franchises of all time and unlike the zombies, has not begun to slow down yet. In addition, the parks can reuse the sets and costumes from the past 2 years, which saves both time and money in planning these massively popular haunt events. We just hope that they use the savings to plus the experiences elsewhere in the parks.

For us this isn’t overly exciting news as over the past two years we’ve haven’t found The Walking Dead mazes we’ve experienced in Orlando and Hollywood to be anything uniquely special or interesting when it comes the scare factor or maze design. Yes, they accurately capture scenes from the show with detailed sets, but the scares just weren’t there. For the most part, these are typical zombie mazes, with actors staggering around slowly with lots of gross-looking festering sores and detached body parts. It should be mentioned that the one element Universal has failed capture in these mazes is the human element as in the show the zombies are not nearly as menacing or scary as the surviving people.

Are you excited about the return of The Walking Dead to HHN? Sound off in the comments below.