One of the most popular haunt themes of the past year is returning to L.A. 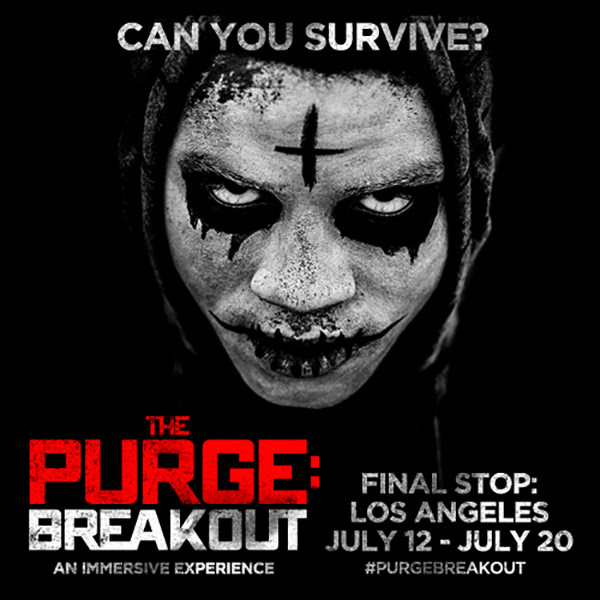 With anticipation for the upcoming movie THE PURGE: ANARCHY our sinister minded friends at Blumhouse have once again taken the terror show on the road with this summer’s THE PURGE: BREAKOUT. This is the second immersive escape-game experience based on the world of  The Purge. Last Halloween, we experienced THE PURGE: FEAR THE NIGHT, which was unquestionably an intense and immersive theatrical thrill show but we didn’t find it to be scary at all. In addition, Universal’s Halloween Horror Nights in Hollywood featured The Purge as theme for their main scare zone. So, if you’re a big fan of the THE PURGE or looking for a new type of experience, then we do recommend that you go check out THE PURGE: BREAKOUT.

In THE PURGE: BREAKOUT, it’s once again Purge Night, and your group is being held captive by a demented torturer…with only 30 minutes before the start of The Purge.  Trapped in his house, groups must work together—solving a series of increasingly complicated mind-bending puzzles and clues—to escape captivity and survive THE PURGE.  Based on popular escape room adventures taking the U.S. and Asia by storm, the experience is like a real life video game.  Visitors will be completely immersed into a horror experience like no other.

Los Angeles is the final stop on the tour and reports from other cities (**SPOILER ALERT) claim that only one group per city has been able to successfully escape. We hope that our L.A. Haunt Stalkers are more successful in finding ways to breakout.

The nationwide tour has sold out and LA is all that remains so get your tickets now!