New mazes based upon Robert Rodriguez’s series ‘From Dusk Till Dawn’ have been announced for both Halloween Horror Nights in Orlando and Hollywood! 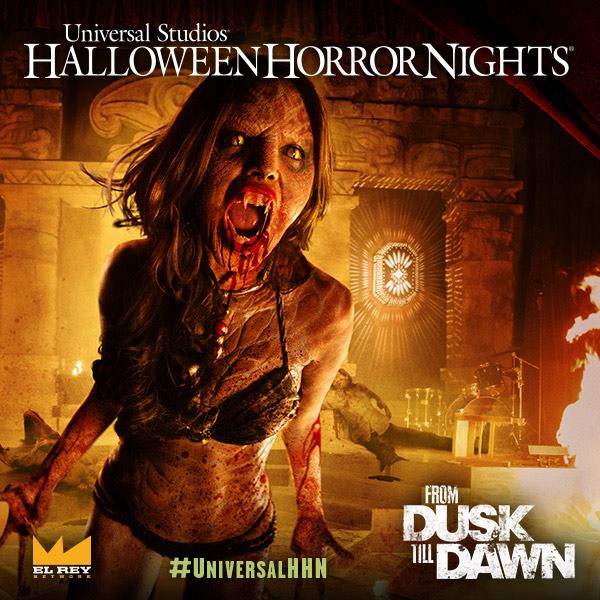 We can’t believe that original movie ‘From Dusk Till Dawn” came out 18 years ago (in 1996) and now it has been transformed into a TV series on the the El Rey Network that is becoming a maze. HHN fans have expressed interest in a maze based on this movie for many years so it seems that the timing is now perfect for this theme as it not only utilizes a very popular horror movie that has a unique spin on the vampire lore; but it also has themes of hispanic folklore (Mesoamerican) that Universal has been exploiting… err exploring over the past few years (La Llorona and El Cucuy) and it helps to promote the new series. A win-win all around.

We think that most guest to HHN will identify more with the movie than the series but the series is said to have a very similar storyline where the ultra violent bank robbers, who are brothers wanted by the FBI, seek refuge inside an isolated nightclub after going on murderous bank heist only to discover that it’s infested with an array of gruesome vampire creatures ruled by a sexy vampire queen. One thing different about the HHN mazes is the vampire club will just be called ‘Twister” opposed to the the movie’s “Titty Twister “namesake. Nonetheless, we imagine that the facades will be visually stunning with the club’s neon lights massive structural place-making. They definitely should also have the barker guy outside enticing everyone to come inside see all the different types of… vampires (smelly, silky, and bloody).

We’ll need to go back and check out the movie again and try to find the El Rey Network, so we can reacquaint ourselves with the characters and get (even) more excited about these mazes. The settings alone should lend themselves to some very impressive maze design, makeup and costuming. We also hope that the Universal designers have new scare-tactics planned that will bring some much needed intensity and scares to these mazes, which seems to have diminished a little over the years especially with the TV show based mazes.

This is the second shared property for both HHN events that’s based on a TV show as last month they announced The Walking Dead mazes will infest both parks for the third year in a row.