Over the past week HHN Orlando and Hollywood have announced two more movie properties that would be co-featured at both events. One was well received with A LOT of hype and excitement and another… no so much.

First, the long awaited AVP: Alien vs. Predator mazes will finally land the iconic creatures at both parks for an acidic blood showdown. Unfortunately this time it may be ‘us’ who looses! This is a maze theme HHN fans have been screaming for many years. It has always been speculated that this would be a very difficult theme for them to effectively pull off due to the intricate design of the Xenomorphs . However, with the successful and very scary The Thing maze back in 2011 we believe the HHN designers will have have it takes to design a very memorable maze for HHN and AVP fans. We actually think that of all the mazes announced so far, this one has potential to be one of the best of the season. 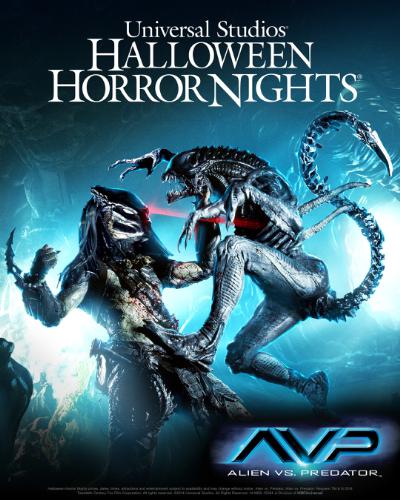 Not a coincidence, this year marks the 35th anniversary celebration of Alien, and the 10th anniversary of AVP: Alien vs. Predator. Alien will have a special theatrical re-release this fall. Each park will create a different setting for the primordial battles.

In Orlando,  guests will visit one of Weyland-Yutani’s secret facilities to assist with a situation that has surfaced. Communication has been lost with a bio-weapons research facility in Central America which houses many divisions dealing in extra-terrestrial technologies, specifically the Alien Xenomorph species. Pieces of transmissions were received detailing that the facility has become compromised and another alien species called Yautja – commonly known as Predators – are hunting both the Xenomorphs and any human presence found. Guests will have to navigate through the labyrinth of destruction within the facility as they struggle to survive the ancient feud between these two deadly species.

At Hollywood, the two rival alien species will fight to the death with Earth as their battleground. In this menacing maze guest will uncover a dangerous alien spaceship carrying a race of hunter aliens known as Predators and a threatening new alien life form that uses human hosts to propagate its species. After crash landing in a remote section of America and escaping to the countryside, the alien and predator become hunter and prey with guests caught in the crossfire.”

“When attempting to bring two of the most iconic creatures ever put on film to ‘Halloween Horror Nights,’ you need to rely on everything you’ve learned up to this point” said Michael Aiello, Director of Entertainment – Creative Development, Universal Orlando Resort. “We’re employing our full arsenal of tricks and techniques in translating the AVP: Alien vs. Predator brand into an authentic and horrific maze experience. Puppetry, elaborate costumes and unique environments have all been created in close collaboration with Twentieth Century Fox. Our guests are going to be thrown head first into this epic battle where only the strong will survive. This is truly going to be an out-of-this-world maze experience that the fans have been waiting for.”

“‘AVP: Alien vs. Predator’ is by far the most technically complicated and ambitious maze we’ve ever created for ‘Halloween Horror Nights,'” said John Murdy, Creative Director for Universal Studios Hollywood and Executive Producer of “Halloween Horror Nights.” “It’s a monumental undertaking to recreate these massive, iconic characters for a live event. Fortunately, we have the expert assistance of Academy Award®-winning make-up artists, Tom Woodruff and Alec Gillis from Amalgamated Dynamic Inc. (ADI), the special effects geniuses behind the original creatures for the AVP film franchise. Tom and Alec and the ADI team are excited about our maze and have graciously allowed us to cast from their original molds so that our maze will be absolutely authentic to the movies.”

The other mazes that were announced for both parks will be based on Universal’s upcoming movie Dracula Untold. If you followed Twitter or read the comments on this announcement you’d see that many fans were less than enthusiastic about this theme and we have to agree. First of all, for anyone who has seen the trailers, you know that while this won’t be a Twilight version of vampires; this movie looks more like a fantasy-action origin about Dracula, akin to Malificent instead of a full on horror movie. It seems that in this movie Dracula is the “misunderstood” hero as his cape and outfit look more like Man of Steel instead of classic movie monster. Therefore, there’s big concern that this theme will miss the mark in presenting a setting and characters that guests will come in being and getting scared of. 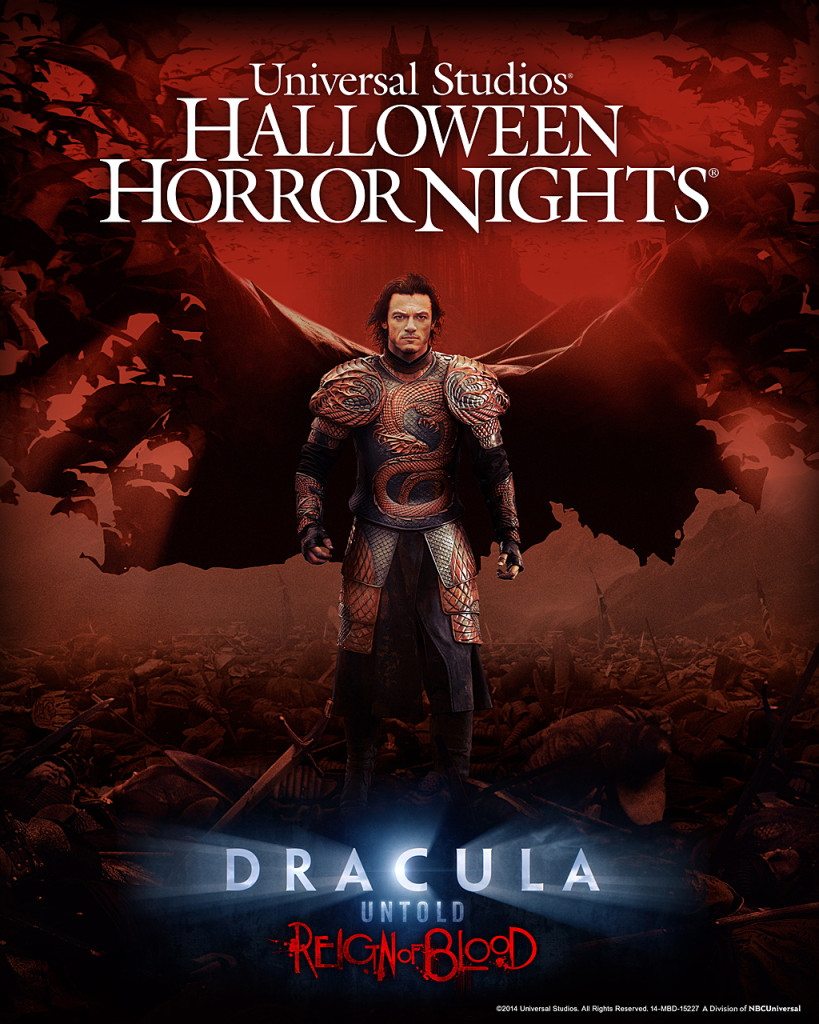 Also, while we understand how it makes perfect sense from a business perspective for Universal to cross promote their movies at HHN it gives off a sense of being inauthentic and a blatant corporate promotion where guest are essentially paying to be advertised too (the American way, we know). We have the same feelings about the Walking Dead, Face/Off, and other current and past themes. While movie themes are the tentpoles of HHN mazes and we’ve loved quite a few of them, we believe the chosen themes should at least be proven horror properties or showcase the frightening “classic” version of the characters people know. Furthermore, this is the second vampire themed maze with the other being From Dusk Till Dawn that will be cross promoting a new TV show.

In “Dracula Untold: Reign of Blood” guests will be introduced to the sadistic Transylvanian ruler Vlad Tepes, known as “Vlad the Impaler,” who infamously tortured his enemies by impaling them alive with a wooden stake and suspending their bodies. The foreboding maze will also shed an ominous light on the one-time hero, turned blood-thirsty-tyrant, who chose to embrace unholy powers in order to defeat his enemies. “Dracula Untold: Reign of Blood” will spiral guests through Dracula’s eternal damnation, where the thirst for blood is never-ending.

“‘Everyone thinks they know the story of ‘Dracula’,” said John Murdy, Creative Director at Universal Studios Hollywood and Executive Producer of “Halloween Horror Nights.” “But there is much more to the tale than just a dark figure lurking in the shadows, drinking blood. While Dracula Untold will reveal the origin story of the man who became Dracula, our ‘Halloween Horror Nights’ maze will invite guests to experience the atrocities Dracula imposed on his victims in the most frightening and immersive way possible.”

“As a huge fan of the Universal Classic Monsters, my interest is certainly piqued any time a film explores other facets of the classic characters,” said Michael Aiello, Director of Entertainment – Creative Development, Universal Orlando Resort. “Dracula Untold offers a unique perspective on the origin of the world’s most famous vampire. Our maze will place guests within many of the pulse-pounding moments from the upcoming film, offering guests an unprecedented living preview of the horrors that await.”

We’ll reserve our judgement to see how these mazes turn out but for now we wish there was more original blood flowing through HHN mazes.