Leatherface follows in the bloody footsteps of Michael Meyers, Jigsaw, and The Collector, as Fright Dome’s 2014 icon and featured haunt.

For our readers under 18 who live in Las Vegas, we think that this could be some exciting news as Fright Dome offers some good Halloween fun for this age set. We say this after our visit to Fright Dome back in 2011 where we were lured in with two Michael Myers mazes. It’s possible that they’ve matured their scare-craft over the years but for our more sophisticated Haunt Stalkers, the gamble is yours to take.

Here’s more details of the massacre taking place in Vegas… 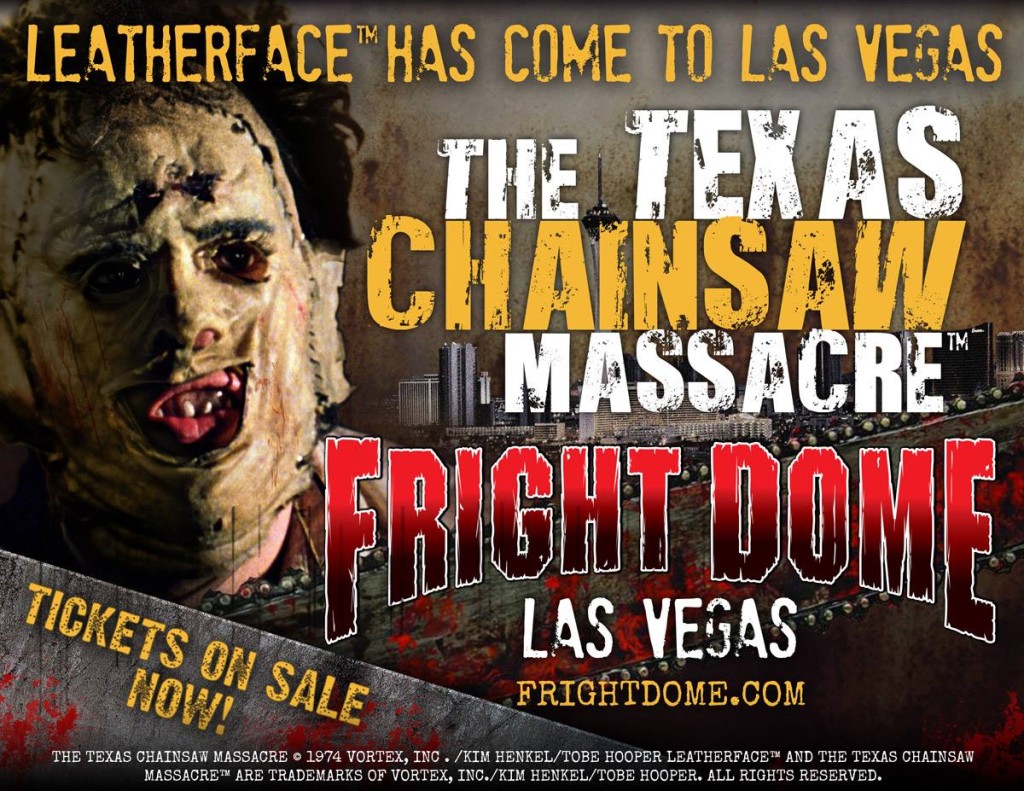 Fright Dome at Circus Circus, one of the nation’s top-ranked haunted attractions, will team up with legendary horror director Tobe Hooper and writer Kim Henkel to feature one of the most terrifying horror films of all time.

Beginning Friday, October 3rd, Fright Dome will once again takee over The Adventuredome at Circus Circus and will theme one of its six haunted houses around the grisly story of THE TEXAS CHAIN SAW MASSACRE.

Celebrating its 40th anniversary this Halloween season, THE TEXAS CHAIN SAW MASSACRE is a theme that Fright Dome fans have been asking to see come to life for years. The themed haunted house will immerse guests in scenes from the iconic film, leaving them to fend off the attacks of one of the most notorious chainsaw-wielding killers ever created, Leatherface. No corner is safe as guests fight their way through in hopes of escaping the cannibals in pursuit. Will they survive… or become the next sliced and diced item on the dinner menu?

“We are happy to be working with Fright Dome to bring The Texas Chain Saw Massacre haunted attraction to the fans for the film’s 40th anniversary,” said writer Kim Henkel.

Utilizing the THE TEXAS CHAIN SAW MASSACRE theme is yet another milestone in Fright Dome’s long-standing history of frightening the masses. Over the years the haunted attraction has worked with many industry greats, including George A. Romero and Marcus Dunstan, to utilize themes from popular franchises including HALLOWEEN, SAW, MY BLOODY VALENTINE, THE COLLECTOR, and more.

“I am thrilled we are able to work with such a renowned brand this year,” said Jason Egan, owner and creator of Fright Dome. “Being able to utilize a movie of this magnitude as a partner is quite an honor. For the past 12 years we have been extremely fortunate to work with some of the best in the horror industry, making Fright Dome one of the top haunted attractions in the nation year after year.”

In addition to this groundbreaking theme, the sweeping 250,000-square-foot haunted theme park attraction will feature five additional new haunted houses, including a solo haunted house, appropriately named “Isolation.” Separated from friends and forced to enter alone, guests will forge their way through a labyrinth of industrial corridors filled with traps, crazed inhabitants, and those that have ventured in before them but never escaped. Endless passages make each person prey in this shadowy haunted experience.

Fright Dome is open from 7 p.m. to 12 midnight October 3-31 on select nights. General admission tickets start at $34.95, and fast pass tickets are available for an additional $15 to $20, which allows express line entry for all six haunted houses. For more information visit Fright Dome online.