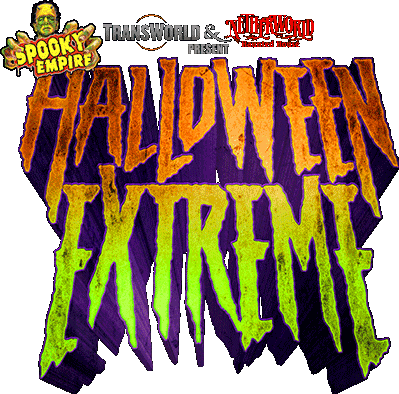 “Halloween Extreme” is a relatively new haunt conference that takes place in Orlando, Florida, every year in May. It debuted in 2013 and took a hiatus last year, but it’s back in a big way for 2015.

Produced by the Netherworld Haunted House, Spooky Empire, and Transworld, Halloween Extreme takes place May 15-17, 2015, at the Doubletree Hotel at Universal Studios in Orlando. Like other conferences, there are celebrity guests, classes, contests, parties, and of course, THE must-have for any successful conference…haunt tours!

This year, Halloween Extreme has upped the ante over other conferences by being the first to offer tours of a major theme park haunt: Howl-O-Scream at Busch Gardens Tampa. The Friday night bus tour will make a stop at the theme park, where attendees will be treated to a lights-on, behind-the-scenes tour of the popular Deadfall and Zombie Mortuary houses. There will also be a preview of Zombie Containment 15, as well as a Q&A session with the event’s production team. This kind of access is almost unprecedented for a haunt conference, so if you have the ability to attend this event, get your tickets now!

Of course, the tour of Howl-O-Scream isn’t the only thing to see. There are 3 other haunt tours scheduled for the weekend, including The Shallow Grave, Legends of Old Town, and The Republic. And with their expanded roster of seminars (including panels featuring speakers from Halloween Horror Nights and Howl-O-Scream), Halloween Extreme is shaping up to be a major player in the conference circuit. Their location in theme park heaven, aka Orlando, doesn’t hurt either.

Check out Halloween Extreme’s web site for more information and to buy tickets. We are definitely putting this conference on our must-attend list for a future year!

Russell - October 8, 2020
1
Had you told us a year ago that in 2020 we'll be writing reviews about a 'Drive-Thru Haunt', we'd say that you had inhaled too much haunt fog. Well, here we are, desperate to just get a sniff of some haunt fog so we've resorted to paying $70+ to drive through a fairground parking lot to watch some people run, scream, and dance around to music in some strobe lights and fog for 23 minutes. Yup, this year 'Drive-Thru Haunts' has sadly become a thing.