We are very disappointed to share that our experience at Insidious 4D here in Los Angeles did not happen due to the people running it being disorganized, disingenuous, and rude. We pride ourselves at Scare Zone in representing the experience everyday people will have when going to haunts so we don’t push to get special press access, treatment, or freebies as we want to report on the haunt experiences as they really are and not biased with VIP access.

Insidious 4D is a very simple marketing promotion, using virtual reality goggles and some film props set up inside of two connected trucks, designed to promote the upcoming movie Insidious 3. During the stop in L.A. guests can RSVP for a reserved time or just show up and wait in line. All the RSVP times required codes provided by various press partners and all seemed impossible for us to use on the event’s website. Nonetheless, the event was listed on the website as opening at 3pm today (Saturday 5/16) so we went at 2:30 to begin our wait in line and hopefully beat some of the crowds. However, upon our arrival we were told that they don’t open until 6:30p (?). Others had also arrived early to get in line and like us had traveled some distance to attend and were also dismayed to be told they now needed to come back 3.5 hours later. When we checked on our phones the website still had the opening time listed as 3pm so this was a critical error on their part. 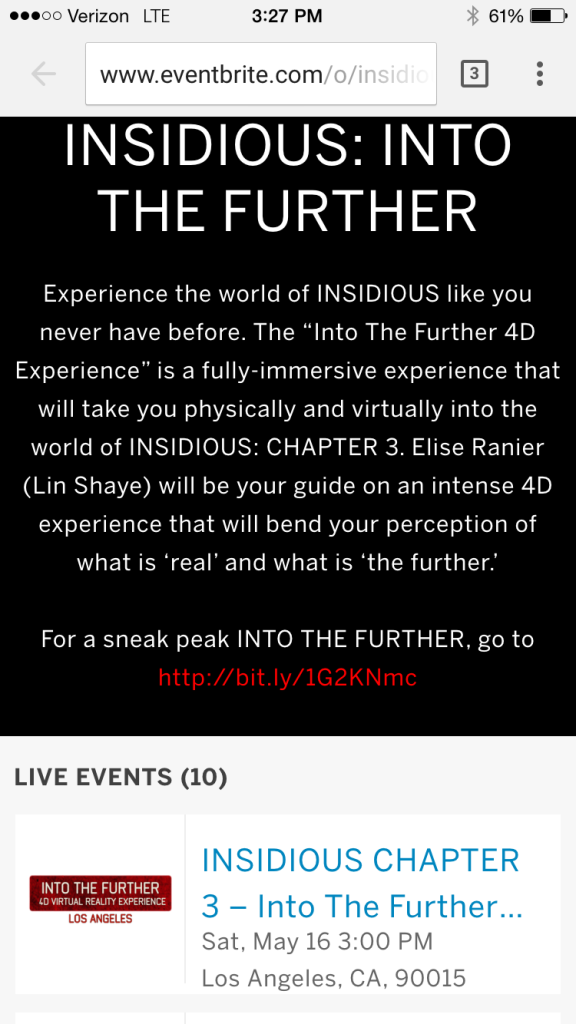 The Public relations (PR) woman who was running the check in line appeared to be nice at first but in a very backhanded and patronizing manner she was also trying to act as if it was our faults for showing up at the time listed on the website; as if we should have known they didn’t have their shit together. She “offered” to “try to” accommodate us if we waited to go in. Meanwhile there was nobody, press or otherwise waiting to go in. However, literally a minute before our other writer showed up, a group of “PR” people (9 total) arrived. I was then told by this Insidious PR woman that “she tried to get us in but since our friend wasn’t there, there’s nothing she can do.” I told her we can still wait, as we came expecting to wait, but to be clear the website stated that they opened at 3 and not 6:30.” The Insidious PR woman then randomly snapped at me and said that she was trying to be nice but my tone is rude (which it was not, I only stated the facts) and I should try at 6:30 and she stormed off. It was a very odd moment. A second later her bipolar disorder kicked in again as she came back over to me and said she’ll see what she can do and then walked off again (WTF?).

Our other writer showed up seconds later and other visitors started to show up as well. The Insidious PR woman started telling them that it wasn’t open until 6:30 and they all looked puzzled since the website said 3pm. She told them it was only open for press. One of us then went over to the group she was telling to leave to validate they weren’t crazy and that the website does say they open at 3pm and can accommodate general admission without a “reservation” time. This is when the Insidious PR woman physically grabbed her and pushed her aside. It was unreal! We told her that it wasn’t necessary to push and the Insidious PR woman harshly said “I told your friend I was trying to make it work for you so why don’t you talk to each and stay out of this.” At this point we were so shocked at the nature of the behavior of this Insidious PR woman we were finished and knew that this experience was not worth it at all. The only scary thing here was is this second class nut job woman who was struggling through her mental issues in public. She actually could have been arrested for assault had we decided to call the police.

We did ask who was in charge and spoke with some other guy “in charge”. He seemed nice enough and seemed to agree what had transpired was uncalled for, but also wasn’t proactive in correcting the situation. While speaking with him, the crazy Insidious PR woman came back and over to us and tried to do more condescending verbal assaults as she apparently was the victim of this situation. Then the guy started to argue with her as well so we were finished with this whole shit show and left.

This is a problem we’ve experienced over the years in the haunt industry. Dealing with the companies, movie studios, and individuals who try to capitalize off of the haunt experience. All these entities do not have the integrity nor the soul to deliver a haunt experience with any real intention to provide people with a good time and scares. They simply want to promote their upcoming moving, sell some goods, and make a fast buck off of dedicated haunters, horror fans, and the general public. It’s really disgusting to think that they’ll be so rude and condensending to the very people who are going to be watching their movies and buying the products that pay their checks. They obviously only have a myopic view of the world in which everyone should simply go along with the rules that they keep changing while they keeping playing games. They don’t see the big picture and know that once the word gets out that their event/haunt is crap, they’ve lost the trust and support of the haunt community, fans, and public. 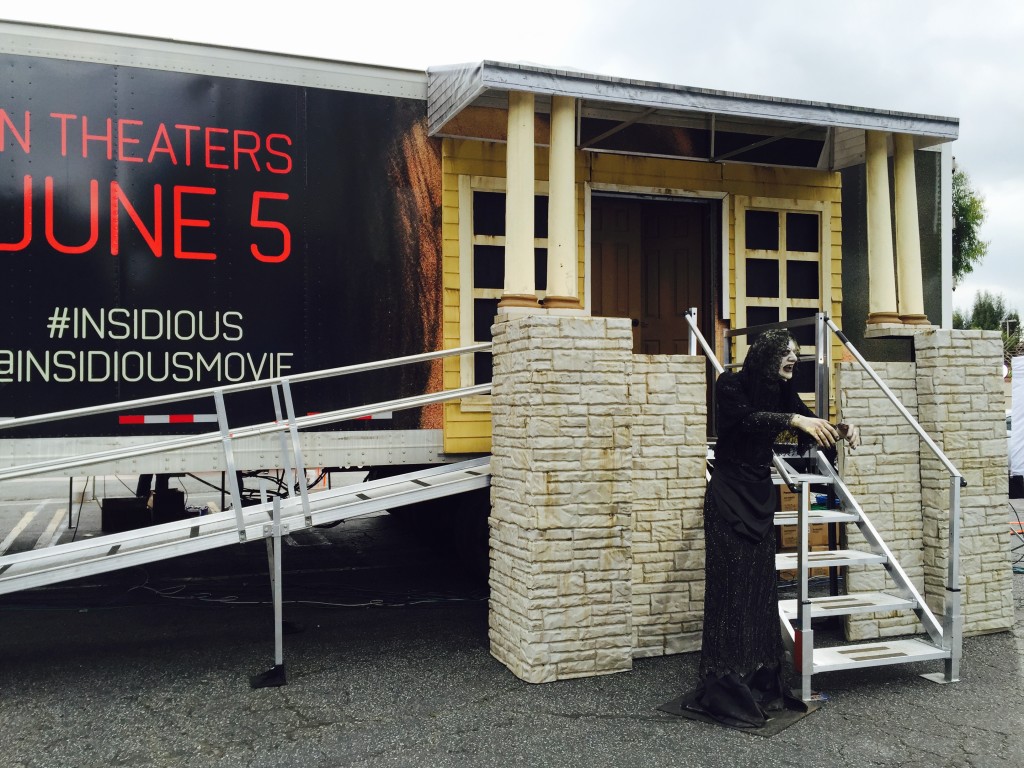 Again, we want our fellow Haunt Stalkers, Haunters and friends to be treated with respect. No one should ever be verbally assaulted, spoken to in a condescending tone, or physically pushed. It is disgusting to know that the Insidious 4D experience is being carried out by a bunch of emotionally distraught and crooked individuals. Sadly this also taints the overall view and experience of the Insidious brand and studios behind it.