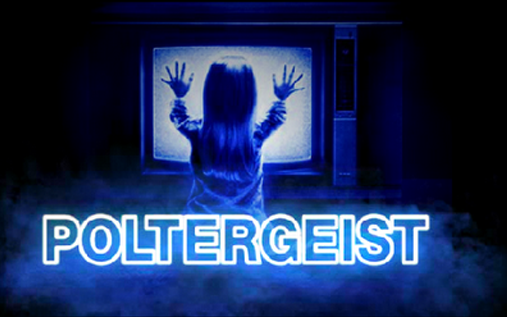 Today the “remake, revisioning, retelling, etc.” of Poltergeist arrives in theaters. As all of you know, the original Poltergeist is considered one of the top classic movies in the horror genre. Therefore, we had to say a little something about it.

For those of us who were fortunate enough to be around in the early 80’s, the original movie successfully tapped into the fears kids and adults carried with them during those times. These fears included, child abduction as Caroline was sucked through the TV set into the “other side” away from her family. There also was familial dysfunction and displacement as the events of Caroline’s abduction lead to the unraveling of the family unit with strained relationships and distrust emerging among the members. For kids, there are also the terrors of all the things that go bump in the night from monsters (and clowns) under bed to the scary shadows of trees reflecting (and crashing) through our bedroom windows at night. For adults, the horrors of being vulnerable in moments of crisis, not having cable TV, and bad real estate investments also manifested in this successful, low gore but high scare movie.

Since Poltergeist came out in 1982 many movies have taken (ripped off) from its story pages, including it’s own 2 sequels. Now 33 years later it seems that they’re baaaack. Current reviews have been fairly positive and we believe in the notion that good ghost stories always deserve to be retold. However, our hope is that the storytelling has evolved enough to capture some of the things that keep us up at night in today’s world, especially us 80’s kids who are now adults. Perhaps instead of the TV, the little girl should be sucked into a mobile phone or iPad?

The one big flaw we see in this movie is the lack of Tangina, the Poltergeist lady herself. Sadly, the original actress Zelda Rubinstien looked into the light and is now on the other side herself but her character was a big part of the movie as she reminded us what we’re afraid of and why. She also provided the wisdom to lead us all to better understand ourselves and learn why we can’t let our own fears get the best of us. Without this central character in the movie we’re not sure if it can recreate the horror magic of the first but we’ll still give it a try.

All in all what we will be watching the movie for is it’s potential to become a haunt experience. While it has always been harder to transform ghost movies into haunts versus slashers and monsters, there have been some successful ghost mazes in recent years. Of course, Universal’s HHN as successfully created some very creepy and scary haunted houses based on ghostly occurrences such as Dead End, and Dead Silence, and Insidious.  Poltergeist itself was also featured in a few rooms inside Knotts Scary Farm’s Horrowood Hotel maze back in the early 2000’s.

We’ll follow up and let you all know what we think of the Poltergeist’s return and look forward to hearing all of your thoughts as well.