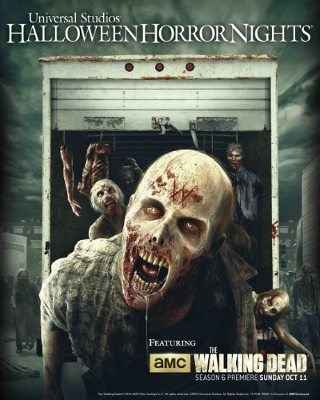 The nation’s insatiable appetite for AMC’s “The Walking Dead” will continue to terrify Universal Studios Hollywood and Universal Orlando Resort when the most intense moments from season 5 of the critically-acclaimed, Emmy Award®-winning television series take a bite out of “Halloween Horror Nights,” beginning Friday, September 18, 2015.

Last year we thoroughly enjoyed the Walking Dead’s invasion at HHN Hollywood. We thought the 2014 maze was the best reincarnation of the Walking Dead.  With a maze of that caliber we won’t necessarily balk at HHN for continuing to bring out the dead, but there’s also a part of us that feels that all good things should come to an end and perhaps after 3 years it’s time for HHN let the dead rest in peace. Universal is obviously well aware of this concern and has a survey currently up on the HHN Orlando website that asks:

“What is your opinion about basing a haunted house for Halloween Horror Nights 2015 on “The Walking Dead?”

Regardless of how we answer the walkers are already confirmed to stalk again in 2015. However,it sounds like both Universal Hollywood and Orlando will like to show us that they can teach the dead new tricks (and scares). 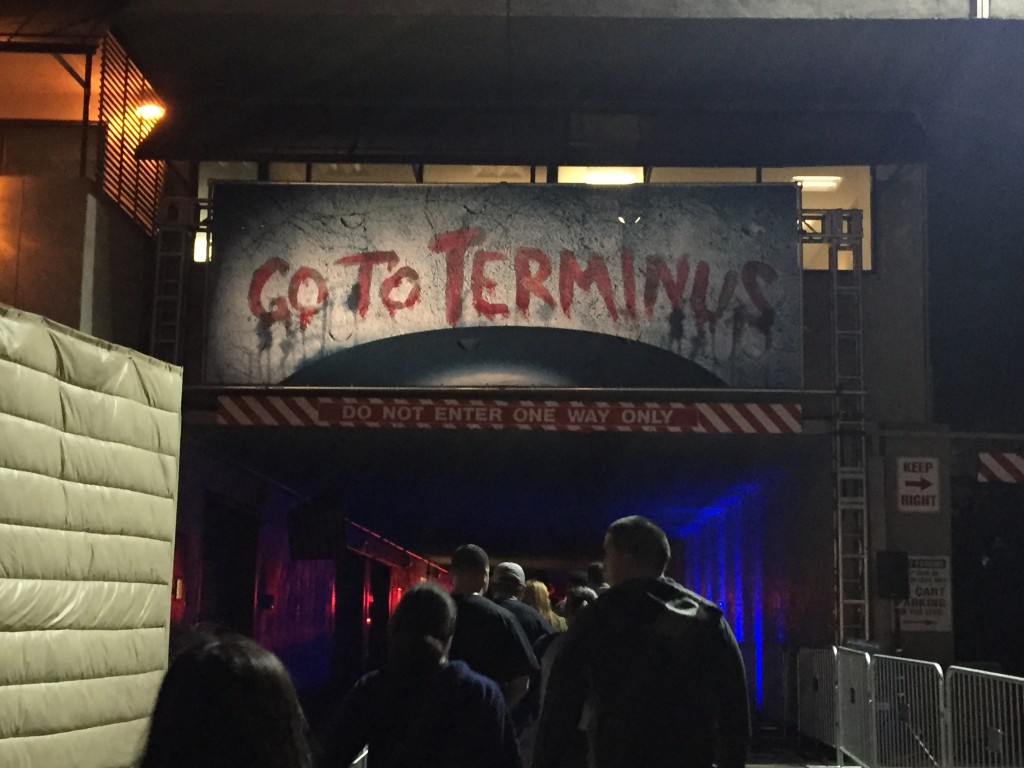 Attempts to evade the terror of the undead and the inhumane brutality of mankind will once again be the underlying theme of these mazes as guests navigate authentic three-dimensional recreations of one of television’s most talked about shows, “The Walking Dead.”

Following in the footsteps of “The Walking Dead” cast, guests will begin their journey at the Terminus safe-haven compound, where an unspeakable hunger has consumed the demented souls of those dwelling within. As the chaos ensues, guests will encounter even greater atrocities as they stumble upon dismembered “W” walkers, witness the horror of victims besieged by the living dead, and step onto the loading dock of the Del Arno Food warehouse to face hordes of “W” walkers.

“I couldn’t be more delighted to continue and expand ‘The Walking Dead’ universe with Universal Studios Hollywood and Universal Orlando than by having fans experience some of the most harrowing and suspenseful moments of our show,” said Greg Nicotero, executive producer and special effects makeup supervisor for “The Walking Dead.” “‘Halloween Horror Nights’ is the gold standard to which all other Halloween-themed events try to emulate, so to bring authentic walkers to this event, alongside other horror greats, is the ultimate thrill.”

“We love giving fans of ‘The Walking Dead’ as many ways as possible to experience the series, so we’re thrilled to be collaborating once again with the teams at Universal Studios Hollywood and Universal Orlando on these mazes that really bring the intensity of the show to life,” said Theresa Beyer, senior vice president of promotion, activation and partnerships for AMC. “We’re excited to have fans come face to face with some of the most memorable and shocking scenes of season 5.”

This year, when Universal Studios Hollywood introduces the all-original “The Walking Dead: Wolves Not Far,” it will come to life as the biggest, longest, most gruesome maze ever built at the West Coast destination of “Halloween Horror Nights.” This all-new experience will feature twice as many, never-before-seen walkers and will be situated within an entirely new theme park location.

“Just like the fans who wait anxiously for the next episode or season return of ‘The Walking Dead,’ this phenom of a show has become a ‘Halloween Horror Nights’ tradition and our guests look forward to a new ‘Walking Dead’ maze each year,” said John Murdy, Creative Director at Universal Studios Hollywood and Executive Producer of “Halloween Horror Nights.” “We’re fortunate to have the expertise of the show’s creative team working collaboratively with us to create an authentic living representation of the series, and for fans, our maze experience is the next best thing to living in the aftermath of a zombie apocalypse.”

At Universal Orlando Resort, “The Walking Dead” will feature hordes of walkers and eerily recreate the scenes, settings and terror that guests have seen on their TV screens. The twisted minds of Universal Orlando’s Halloween Horror Nights team are using first-ever tactics to bring the horror of season 5 to life in this year’s maze – even placing guests in the iconic flooded food bank scene where they’ll be surrounded by hundreds of gallons of water as flesh-hungry walkers attack.

“We’ve been fortunate to recreate many horrific moments over the past few years, and as the series raises its own bar every season, so have we with our environments,” said Michael Aiello, Director of Creative Development for Universal Orlando’s Entertainment team. “Faithfully representing season 5 has brought with it all-new elements, and we will literally place our guests in the lead role as they escape hordes of walkers.”