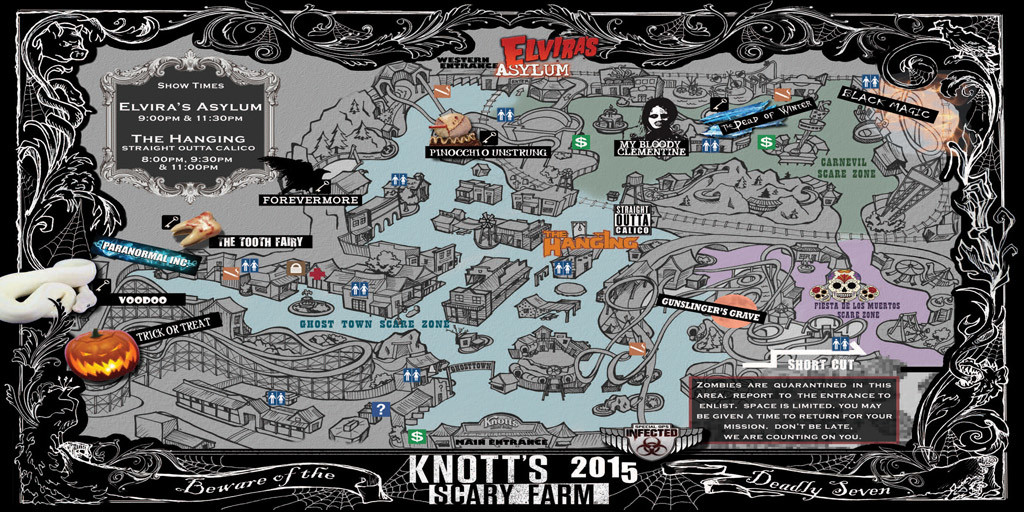 This weekend at ScareLA the folks at Knott’s Scary Farm revealed the first details for this year’s Halloween Haunt, which begins in only 45 days on September 24th. This year’s event will feature 2 shows, 3 Scare Zones, 5 Skeleton Key Rooms, 11 mazes, and 1,000 monsters! There’s also a ‘Scary Farm Pass‘; a haunt season pass available for “only” $80. A great deal for local fans. Tickets are on sale now starting at $39.99.

Escape the icy grasp of the chilling Snow Queen in the The Dead of Winter. Backed by a ravenous beastly army of resurrected Viking warriors, she is hellbent on avenging her beloved family’s murder, and preys upon any unsuspecting visitors who foolishly enter the borders of her icy domain.

In this groundbreaking new maze featuring high flying aerial stunts and scares, guests investigate a haunted hospital where the patients were tortured for decades by deranged doctors and nurses. Demonic spirits of the murdered victims have been detected throughout the mysterious halls, while evil medical staff hunt for new patients to torture.

There is no tale more vicious and vengeful than that of My Bloody Clementine. Take a grim ride through the transformed Calico Mine where Clementine and her father were brutally murdered centuries ago. Their wretched spirits roam the tunnels in search of those who killed them. This year, the ride through maze will feature live monsters out for revenge at the train track’s every turn.

This twisted tooth fairy steals more than just baby teeth as he drags his victims out their bedroom window and into a world of deranged dentistry. Unbelievable special effects include a blackout room through which guests must feel their way out, a disorienting x-ray strobe light room, and a final encounter with the massive tooth fairy, himself. Say aahhh.

“A Blood Moon Rises” continues the story of The Gunslinger. The Red hand gang has disturbed a burial ground that contained a SkinWalker relic, that has transformed them into Werewolves under the Blood Moon Curse. Return to the Old West and walk in the bloody footsteps of a betrayed and left for dead gunslinger on his path to retribution. This journey back in time takes guests on a trail of terror through abandoned gold mines, a treacherous corral, a seedy saloon and a final showdown at town hall.

Survive the Zombie Apocalypse in an All-Out War! Back by overwhelming demand, guests can enlist to fight the zombie apocalypse in an all-out war against the undead in the interactive experience, Special Ops: Infected – Patient Zero. In this ambitious attraction groups must work together to fend off zombies and complete terrifying missions before time runs out. Special Ops: Infected seamlessly integrates interactive gaming technology with an immersive mountainous landscape, delivering a breakthrough interactive haunted experience that is as terrifying as it is challenging. Missions will take guests through a variety of wilderness terrains, including the unpredictable barrel bridges across the rushing river, through the dark caverns, and through mysterious backwoods. Six acres of the beloved theme park is now home to mutinous, scream-inducing zombies, and the time has come for a harrowing Special Ops survival mission.*There is no additional charge for Special Ops: Infected.

Years have passed since the blue fairy denied him his final wish, but Pinocchio has returned with an army of murderous marionettes intent on killing his former masters. The purpose of his killing spree – human flesh to cover his twisted wooden body. Revenge comes with no strings attached.

The twisted mind of Edgar Allen Poe comes alive as the “Forevermore Killer” works his way through one haunting tale after another. All the victims unwittingly find themselves a part of “The Raven,” “The Tell-Tale Heart,” “The Pit and the Pendulum,” The Masque of Red Death” among other horrific stories. Guests will want to catch up on their reading to stay a chapter ahead of their demise.

The veil between the living and the dead is severed when Houdini’s ghost materializes during a séance and ushers a host of demonic illusions to play tricks on anyone who intrudes on his theatre. From the prop room to the main stage this dilapidated theatre will make visitors skin crawl. Will you be part of the disappearing act?

VOODOO – ORDER OF THE SERPENT:

Beware the cursed swamps of New Orleans, where mindless zombies trudge through the murky bogs in search of bloody sacrifices and demons use Voodoo curses to possess innocent souls. Choose your path carefully children, for one wrong turn and you will be hexed forever. This year’s maze is even longer featuring a new finale.

Trick or treat, which will it be? Step forward and ring the witch’s doorbell. Oh, she is home, but where? You are not quite sure. Don’t be afraid, her minions will guide you. You can come away with a treat, but is it worth it? This year’s maze features a new attic scene and a witch’s potion room to conjure up more scares.

GHOST TOWN STREETS: Ghost Town Streets is the original – and still most terrifying scare zone – that started it all. Bands of half-human, half-animal monsters prowl the streets and inhabit the fog. Beware the notoriously startling Sliders who lunge from every fog-filled corner of the land. New for this year, Ghost Town Streets has been expanded to the backstage maze area to create the largest scare zone in Scary Farm history, full of new surprises.

CARNIVAL: Knott’s Boardwalk is taken over by “CarnEVIL,” where the freak show is the main event and countless clowns crave your undying attention.

DEADLY 7: Prowling the darkest corners of Scary Farm’s midways and scare zones, the Green Witch and her Deadly 7 are a sadistic crew guilty of more terror than meets the eye. Each of the monsters represent one of the seven deadly sins and make terrifying surprise appearances throughout the park each night.

ELVIRA’S ASYLUM: Elvira, the legendary Mistress of the Dark, returns to Knott’s Scary Farm in a spectacular all-new nightly show, Elvira’s Asylum, which transports guests to an asylum of music, dance and comedy.

THE HANGING: – Haunt’s traditional show (that we only watch while waiting in line for Calico Mine Train or The Log Ride) in Calico Square will continue its’ irreverent look at the year’s pop culture with special effects, pyrotechnics and stunts.

ELVIRA MEET & GREET: In honor of Elvira’s return to Knott’s Scary Farm, the Nautilus merchandise shop will become Elvira’s Boo-tique, where fans can purchase stylish apparel and sinfully fun products featuring and inspired by the Legendary Mistress of the Dark. Each night, a limited number of guests who spend at least $50 at Elvira’s Boo-tique during Knott’s Scary Farm will get a chance to meet Elvira between performances of “Elvira’s Asylum” and collect her signature on one of the purchased items.

BOO-FET WITH EARLY ENTRY: Knott’s Boo-fet dinner invites guests to feed the beast before Knott’s Scary Farm opens each night. Dine on a frightfully delicious buffet meal while monsters scare and delight you throughout your meal. Meals include a collectible 2015 souvenir cup, which provides unlimited complimentary refills during the night of first use, and 99¢ refills for the rest of 2015. After dinner, enjoy early entry into select parts of Knott’s Scary Farm before it opens to other mortals. Boo-fet dinner is $26.99 online / $32.99 at the door (plus applicable taxes and fees).