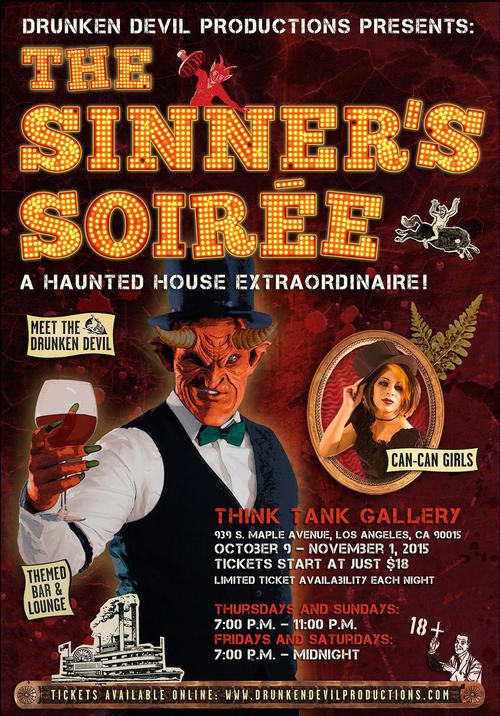 Last night we took a haunt crawl through downtown Los Angeles where we ended up on one of the darkest streets in the heart of skid row looking for the promise of a new haunt adventure at Drunken Devil’s Sinner’s Soiree. This new haunt previewed at ScareLA and we were looking forward to it especially since there’s an apparent drought of independent haunt operators in the Los Angeles area this year. Drunken Devil’s unique proposition is to combine a traditional haunted house experience with a venue where patrons can celebrate the spirit of Halloween. The concept really isn’t all that unique as there’s been many haunts in the past that have offered scares topped off with booze but Drunken Devil is one of the few places around this year trying to seduce the drinking dead.

The haunted house portion of Drunken Devil is set up to be a trip through the haunted streets and alleys of New Orleans. On the journey to the Sinner’s Soiree there are “demonic Mardi Gras clowns, scandalous can-can dancers, and sadistic voodoo witch doctors”.

Cutting to the chase, our journey through the dark side of New Orleans wasn’t very good at all. The maze is mostly comprised of black plywood walls with a few decorated scenes. We’ve seen many home haunts with far superior sets and designs. The talent was also limited in quantity and quality. The sparse attempted scares were comprised of the typical tactic of a monster sneaking up from behind, hiding around the corner or behind/in a prop. There also were a couple scenes of theatrics that never really paid off as the actors were hard to understand and their narratives fell flat coming across as pointless.

From the website and reading pre-reviews from other haunt sites that were invited to the open bar media night, the ‘buzz’ around the ‘horrors’ of Drunken Devil was promising. They hyped up Drunken Devil as being a new and ambitious haunt offering a night of scares and drunken debauchery. As supporters of the haunt community we really wanted to like this maze and see it do well but we have to call it when we see it and we just couldn’t find any value this haunt. It just left us feeling ripped off from our money and time.

Starting at $18 a ticket it’s way overpriced for a 4 minute haunted house experience. We paid extra for the front of the line pass, which wasn’t necessary as there was no line when we arrived. To add more to our disappointment, the bar selection was nothing more than a folding table selling beer, wine, and energy drinks whereas the online promotional art features a devil looking down at a martini glass. We know liquor licenses are hard and expensive to secure but when we think of New Orleans bars we think of drinks overflowing with bourbon, rum and other libations.  Even with a burlesque dancer and some Mardi Gras decor, the bar setup really isn’t a place we’d want to spend an evening at. They also charge $5 to park in a dark lot located behind a building across the street, that’s only slightly less sketchy than parking right on the dark streets of skid row.

Unlike haunts where it’s obvious that they are in it for a money grab, the intentions of the folks behind Drunken Devil seem to be more authentic. However, they just aren’t able to properly stage an interesting and scary haunt in a market that has already experienced far more sophisticated venues like Delusion, Blumhouse, this year’s CreepLA, or the Halloween spectacles at the nearby theme parks. We know the haunt business is a tough game and we can only wish them better luck if they try again in the future.