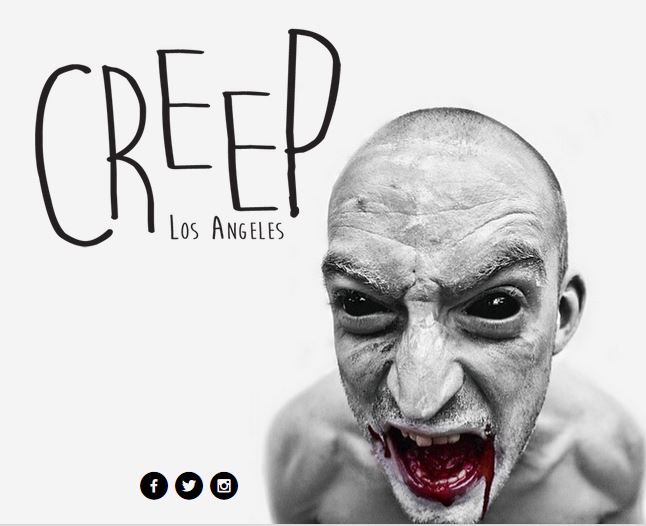 But I’m a creep

What the hell am I doing here?

These are the lyrics to the unsettling, slow choral version of the Radiohead song that plays while you wait your turn for the new Creep Los Angeles haunt. But don’t listen to those words—you do belong here, because Creep Los Angeles is a seriously scary, demented, and innovative new haunt experience that you should definitely put on your list this October. 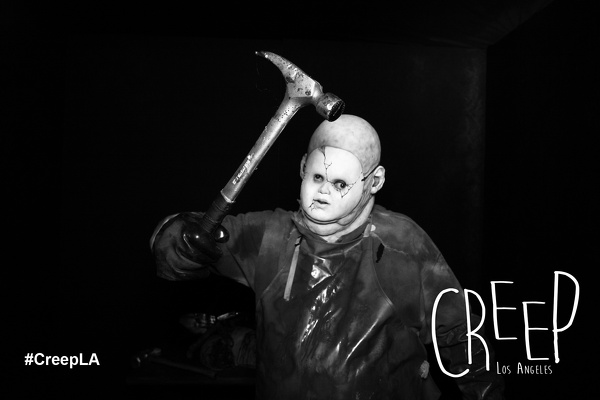 Creep Los Angeles is located in the Arts District, only a couple of miles from another new haunt, Drunken Devil. The location is unassuming and bit deserted at night. The haunt is housed inside an abandoned warehouse, with the only indication there’s a haunt inside being the word “Creep” projected on the outside wall and the line of people on the sidewalk. We were unsure what to expect from this haunt as the website was deliberately vague on details, although it did tell us that we’d be forced to run and crawl. Some of the other people waiting in line with us were hoping the experience would be on the level of “Blackout” or “Alone.” We can report that it’s certainly not as intense as those two haunts, but it’s definitely more extreme than the standard theme park haunt experience. So for us, it’s a nice mixture of something a little more extreme without being too uncomfortable.

This haunt sends groups of six people through at one time, with groups going through every 8 minutes or so. We were forced to sign a waiver to enter the haunt, and we were warned that we’d probably be touched. After signing the form, we were ushered in a small holding area, where an older woman told us we’d meet her “creepy son” inside. Then she proceeded to stare us down for the next uncomfortable 5 or 7 minutes. Suddenly, a “creepy guy” burst out of the darkness and took one of us—alone—into the haunt. Immediately, this was different from most other experiences out there. We don’t really want to give away what happens if you end up being chosen for this “alone” experience, but we’ll say that it’s not too intense, but certainly helps to build suspense. Eventually, the group is reunited, and the haunt proceeds.

Overall, there’s not a very coherent story line behind the haunt; instead, there is a sequence of different scenes featuring actors who put on a bit of a performance where they might warn you about something, and then something scary happens (Bloody Mary, for example). The actors we thought of as the “creeps” are men and women who are mostly wearing masks that look like they’re from the The Purge, with the odd gorilla or scary baby mask thrown in. One of the more intense scenes involves hiding from a killer inside a dark box, with peep holes you can look out to see the killer stalking you.

Despite the fact that we didn’t gather a distinct story from the experience, we still felt that the scenes had a good flow and connection to them. The overall aesthetic is sparse, with an almost black-and-white feeling to the scenes. Some of the rooms have a surreal, “arty” quality. Lighting and effects are kept to a minimum, and the presence of a single actor in the room can sometimes be scarier than any scene full of monsters in a theme park haunt.

As for the running and crawling: yes, you will be doing these things. But no, it’s not that bad. You will most definitely be touched at some point, but it’s not too invasive. The actors occasionally pull people away from the group, but the separation doesn’t last long. Overall, Creep Los Angeles strikes a really good balance between something a little more extreme than the typical haunt without being over the top. You will feel uncomfortable, but not violated.

We definitely recommend that our readers check out Creep Los Angeles. The haunt is scary, unique, and good for haunt stalkers tired of the typical, “monster around the corner” scare. We also feel that the $25-$35 ticket price is a decent value, as the haunt lasted about 20 minutes, and with the small group size, everyone was guaranteed to get scared at least once.