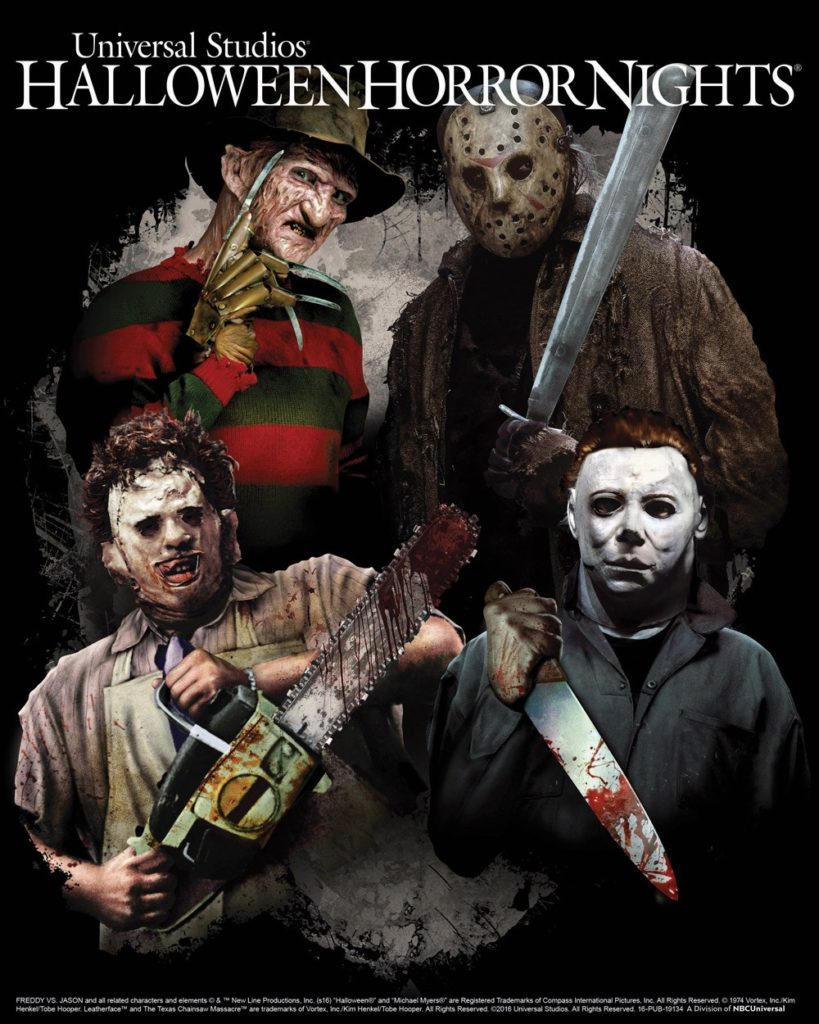 Get ready for slashers gone wild at this year’s HHN! Today we got a triple threat of scares with the announcement of two more mazes, featuring 3 more classic movie slashers, joining the 2016 HHN Hollywood lineup. This is a 80’s horror fan’s best dream and worse nightmare come through! Check out the descriptions from the press release along with our take on these new haunt attractions.

“In “Freddy vs. Jason,” demented killer Freddy Krueger (A Nightmare on Elm Street) returns to the scene of the crime, this time accompanied by notorious hockey mask killer Jason Voorhees (Friday the 13th) to inflict twice as much terror. Inspired by New Line Cinema’s 2003 film that brought together the biggest horror icons in history, this new experiential maze thrusts guests into an epic battle in which the fate of only one killer will survive.”

We loved this maze in Orlando and look forward to experiencing it with Hollywood’s new twists. Unlike Orlando’s, which more closely followed the narrative of the 2003 movie (has it been 13 years?!) , this maze will be “inspired” by the film taking some creative liberties to bring a new maze experience and scares for frequent Haunt Stalkers, like ourselves.  We hope they keep the element of switching up the winner at the end of maze like they did Orlando.

Next up is a maze theme we’ve seen quite a few versions of over the years at HHN, The Texas Chainsaw Massacre. Orlando is also getting TCM maze this year that is based  on the orginal movie. In Hollywood, instead of being based on a specific movie in the series, we’ll get a unique story line about the adventures of Leatherface and family as they run a BBQ restaurant for cannibals. Almost sounds like the premise of a sitcom spin off , but we expect there won’t be any laughs in this maze. We hope!

The unspeakable terror embroiled within “The Texas Chainsaw Massacre: Blood Brothers” maze, based on Tobe Hooper’s original film, will pit guests against the unsavory wrath of the demented killer, Leatherface, and his mentally unhinged brother, Chop Top, as they unite in misery to expand the family’s cannibalistic enterprise and slaughter a new generation of innocent victims. With the perverse duo at the helm of a grotesque BBQ restaurant staged inside a dilapidated roadside gas station, unwitting guests will soon realize that new terror awaits as the blood brothers continue their hedonistic prey on human flesh.

As was previously announced, the original masked killer, Michael Myers will also be in the mix as he would never miss a Halloween party.

Escaped mental patient Michael Myers makes a homecoming return in “Halloween: Hell Comes to Haddonfield,” an all-new maze inspired by the second film in the classic “Halloween” horror franchise. Echoing the infamous words uttered by the film’s Dr. Sam Loomis, “You can’t kill the Boogeyman,” the twisted maze will shed new light on the terrifying lunacy of Michael Myers as he scours the streets of Haddonfield and stalks the halls of Haddonfield Memorial Hospital in ruthless pursuit of his victims.