This past weekend at Midsummer Scream we attended the Queen Mary’s Dark Harbor panel. It was a lively presentation from the haunt’s creative team with many of the characters such as the Captain and Dead Deckhands making appearances. The audience was very excited and from everything they shared we know that this will be another frightfully exciting year.

In addition to announcing that there’ll be libations available for sale in every line and the return of the swings from Neverland Ranch (Shamone!), they also revealed their wicked plans for 2016’s new maze. The Queen Mary’s cruise into the Dark Harbor will now include a train ride to hell with the New Maze INTREPID. This maze will feature the disturbing journey of the ship’s builder Ivan aka Iron Master. 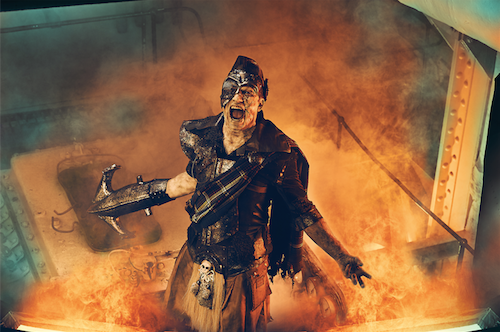 LONG BEACH, Calif., (August 1, 2016) – The Queen Mary’s Dark Harbor has a new cantankerous resident spirit, Iron Master. His torrid legend is brought to life through Intrepid. The new maze transports guests aboard a steamin’ locomotive, back to the birthplace of the Golden Era of Travel –Scotland’s storied shipyard of Clydebank. Blazing down the Iron Master’s death-defying tracks, guests will bear witness on his cursed journey to save The R.M.S. Queen Mary from her predecessor’s Titanic peril. All who dare will swelter and drip with fear as they traverse and crawl to their final destination: Iron Hell. The Iron Master has crossed oceans of time to reclaim his beloved Queen Mary. How far will you go?

As the tale is told, Ivan was the ship builder and original iron forger of the majestic R.M.S. Queen Mary. In the early 1930s, Ivan’s shipyard was commissioned by Cunard to build the storied Scottish vessel. Eager to rise to the challenge, he scoured the world in search of a flawless crew and devoted his life to what would be come the most famous shipyard in history. The R.M.S. Queen Mary set sail in 1936 with Captain at the helm and unknowingly, Ivan in the hull.

One fateful night, a mysterious steam engine rolled into his shipyard rail station and beckoned Ivan. Before he realized it, he had boarded the deadly train and was barreling toward darkness. By the end of the dark journey, he realized he had been transformed into a terrifying creature – part metal, part monster. Over the century, his corpse decaying, Ivan was forced to replace pieces of his rotted flesh with cast iron – the same from which he forged his beloved ship. A slave to his craft in life, so too, would he become in death. Cursed for eternity as protector of the Queen Mary, Ivan is now…Iron Master.

Through the best of storms and worst of wars, the R.M.S. Queen Mary remained the fastest ship on the seas until she was laid in her eternal resting place here in Long Beach. Befittingly dubbed “The Grey Ghost”, she eerily hovers in the harbor, marking her 80th year afloat.

It is said that the spirit of Ivan – the Iron Master has grown restless and the Ringmaster’s circus freaks have overstayed their welcome. Now more than ever, he is heard banging his iron clad limbs as he trudges the ship’s hull. Called upon by the Captain, Iron Master has disembarked to restore order to the steely shipyard in the dark harbor.