We recently re-posted our 2010 review of Queen Mary’s Dark Harbor. That year, the event had turned itself around from being a complete “Shipwreck” (consisting of neon 3D-painted plywood walls, cheap masks, and mazes with barely any theme) to an impressive major player on the SoCal haunt scene that smartly put to use its location and history as leverage for a uniquely themed event. For the past 5 years, Queen Mary has been near the top of the haunt pack, serving as a legitimate challenger to Knott’s and Universal. However, we’re a bit sad to say that the 2016 version of Dark Harbor fails to live up to its previous standards and has slipped back into second-rate status.

So what’s changed? First of all, the event has undergone a bit of rearranging this year. Some of the attractions have been pushed out to the periphery (the main stage, the Hex Paintball attraction, Deadrise), and the footprint of the various lounges/bars has been extended. Overall, as we walked the Dark Harbor grounds, we got less of a feel of a coherent haunt event than a big carnival. The large Deadrise facade, which had been an impressive centerpiece in years past, now seems to be an afterthought. Instead, the focus seems to be more on the food and liquor stalls. 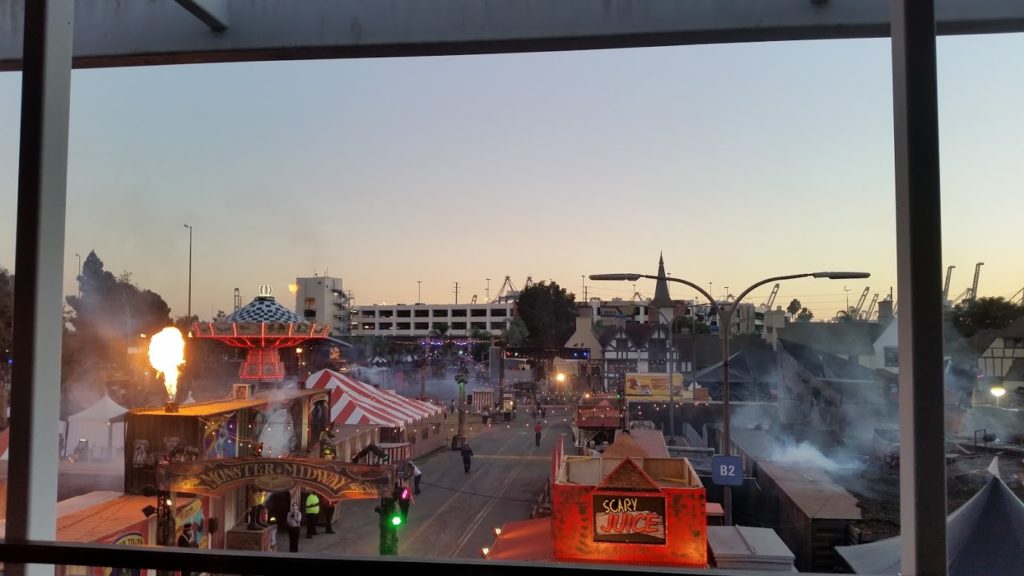 Second, the more disturbing fact is that the new maze (Intrepid) was very weak. This is concerning to us because it’s never a good sign when the brand new maze is the worst of the event. This can be an indication of either decreased budget or change in talent/direction of the creative staff. Neither is good in the long-term, obviously.

So with those initial thoughts, let’s get to the review featuring videos from ThemePark HD. 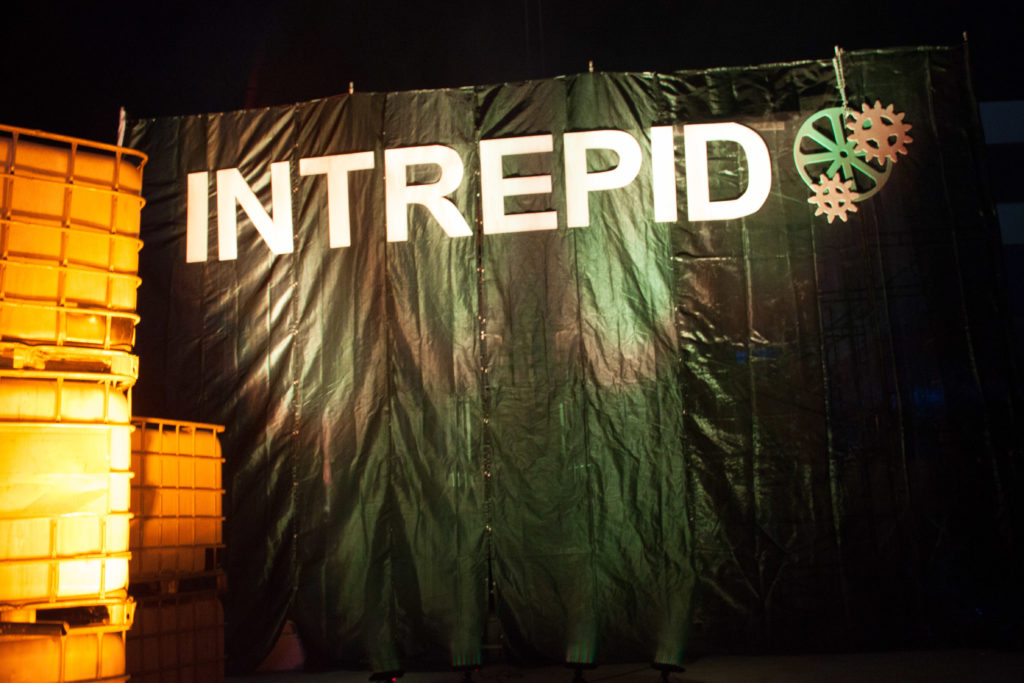 Sharing the dome space with “Circus” this year is the brand-new maze Intrepid, which features the new character of the “Iron Master.” The backstory involves a Scottish shipyard and a locomotive bound for hell. The steam train entrance to the maze looked promising, and upon entering, groups were immediately split into two paths: some people were directed upstairs while others went through a side passage and remained at ground level. We took the upstairs route. The opening scene was cool, but after exiting the train, there wasn’t a whole lot to look at. The entire maze has an industrial feel, with a lot of chain link fencing , dark passages with black or corrugated metal walls, characters in welding masks, simulated iron pouring into molds, and even metal tubes to crawl through. The maze lacked detail, and the story of the Iron Master didn’t really come through.  There was also a complete lack of scares.

Circus
Circus has changed a bit this year, with some new scenes and removal of others. The beginning of the maze has a short, multiple-path component, with scareactors directing people through different numbered curtains. We saw a ball room through one of the curtains, although no one in our group was directed through there. This is probably a smart change for 2016, since the ball room created a big slow down last year. There’s also a mirror scene with path misdirection, which is another fun element pretty unique among theme park haunts, as they rely on getting people through the maze as fast as possible by typically using a conga-line approach. So we applaud Queen Mary for adding these daring elements to the maze. However, we were again disappointed in the lack of scares here. Besides the two path elements, there really wasn’t much that was very memorable this year.

Samuel the Savage is back for 2016, and so is the integrity of this maze. B340 remains a solid maze, with good theming, scares, and acting. The descent into madness is captured well, and many disturbing scenes increase the tension the scares along the way. The nuns are still as terrifying as ever.

What the hell happened here? Last year we complained about the sparse detail and cartoony preshow backstory. But despite that, we gave it a solid rating mostly because of the dressing room and ballroom scene. Unfortunately, the dressing room scene was very disappointing this year, with lighting that was too low and lack of the usual suspenseful buildup. But worst of all, the ballroom scene was completely removed. These two scenes accounted for the biggest scares of the mazes, and they’ve been obliterated for 2016. Instead, the maze has a laughable, gory theme, and Gale seems more sad than menacing. We don’t know why they retooled the maze this year, but it was definitely not an improvement. 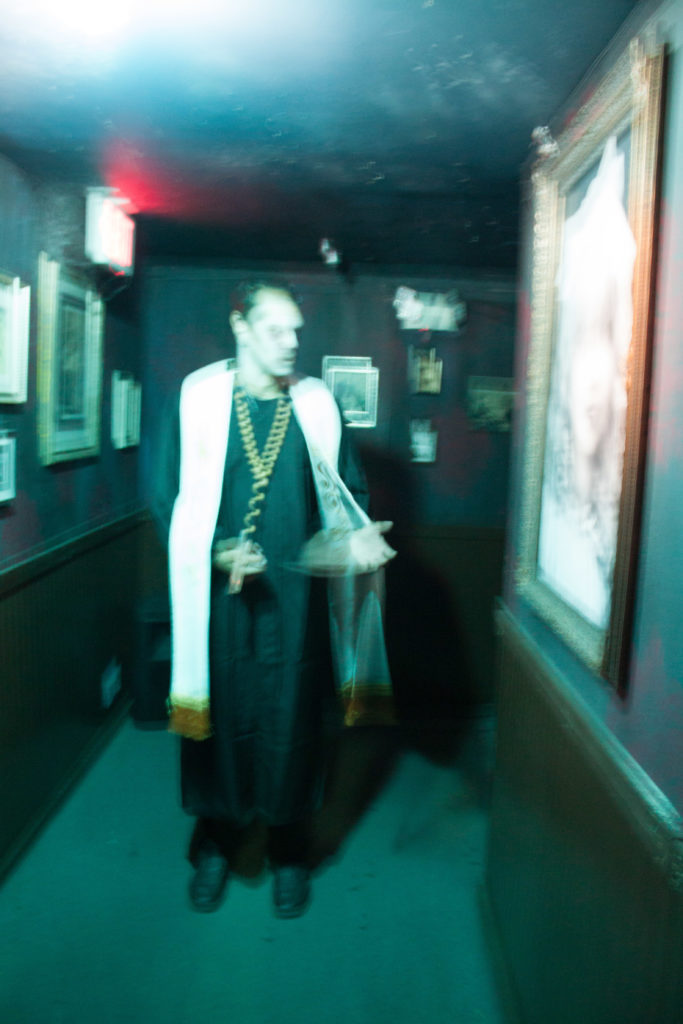 Scary Mary is back for a second year in her very own maze. There are a few cool new effects near the beginning of the maze, but the rest was pretty forgettable. We feel there is a lot of wasted potential here, as a creepy dead girl could be pretty frightening. However, as with most of Dark Harbor’s mazes, Lullaby lacks a suspenseful buildup for any of the scares, and even though the actors are trying really hard, the scare moment just doesn’t happen. The water effects and lighting are pretty good, but they’re not being used to their full potential. In addition, the ending scene in the pool room is lackluster. Earlier mazes that went through this room did a much better job of giving the room the creepy, disturbing feel it deserves. 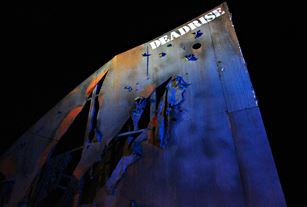 Deadrise was our favorite maze last year, and it returns to take the trophy in 2016. The entire premise of this maze is extremely simple (a rotting ship with zombie sailors), which illustrates the point that elaborate backstories and well-crafted marketing prose on a website are not solely sufficient to create a great maze. This maze is a great example of how lighting, atmosphere, and scares should work together create suspense and enhance scares. The actors in this maze continue to be among the best at Dark Harbor, and they have perfected the technique of holding back when necessary and going completely crazy when the scare moment is right.

Don’t bother with this. There really is no point. It’s a room with some cheesy props and blacklights, and you shoot a stationary paintball gun. Last year, they had actors, which at least spurred some laughs. Apparently, the actors complained that the psi on the guns was too high. So there are no actors. Skip this. 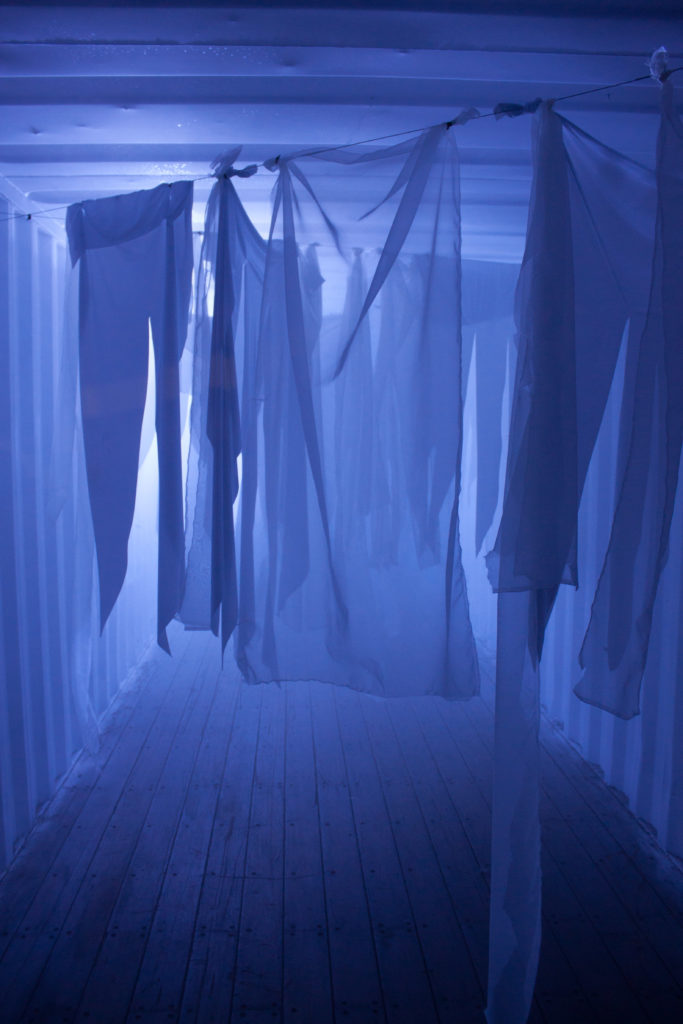 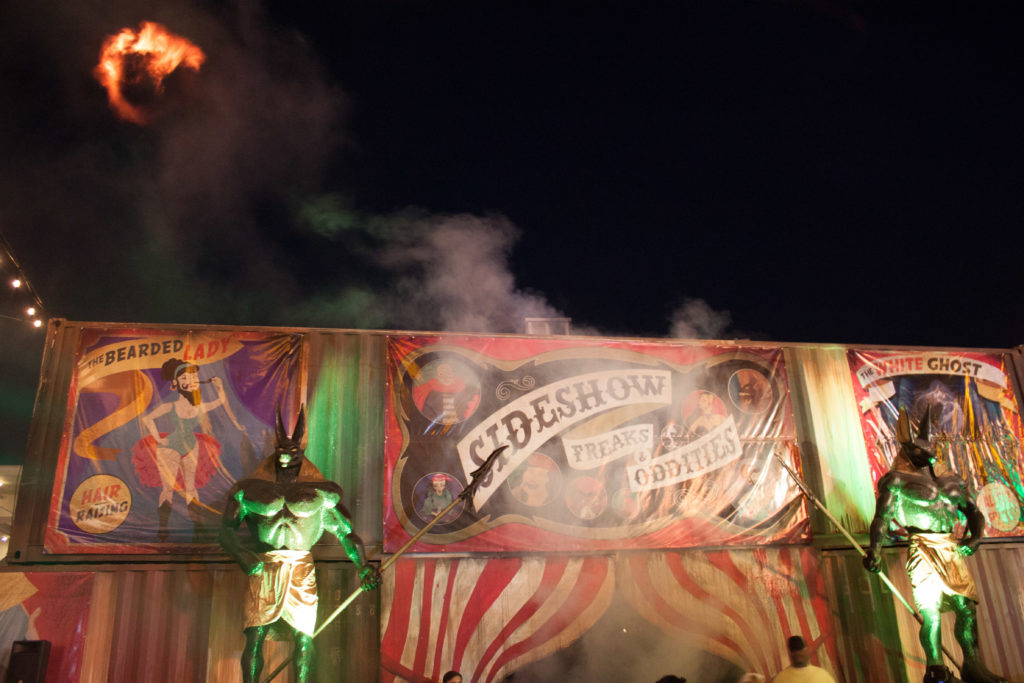 The best thing about the sideshow this year is the barker cracking jokes outside. And there’s no charge to stand around and listen to him, so grab a drink or some food and spend some time there. But should you pay to go inside the sideshow? Probably not. This year, the sideshows are linked, so you no longer enter and exit each show separately. There’s no shadow spirit this year, which is disappointing as he was our favorite. Dear Queen Mary, why are taking away everything we liked?

When your feet need a rest, head inside the ship to sit down for a bit to watch a 3D movie that looks like you’re watching someone else play a video game. Actually, this “experience” was more impressive than it sounded. There are a lot of 4D effects, including numerous pokes to your spine throughout the short film. We thought this was a fun little diversion and might be worth the extra charge. 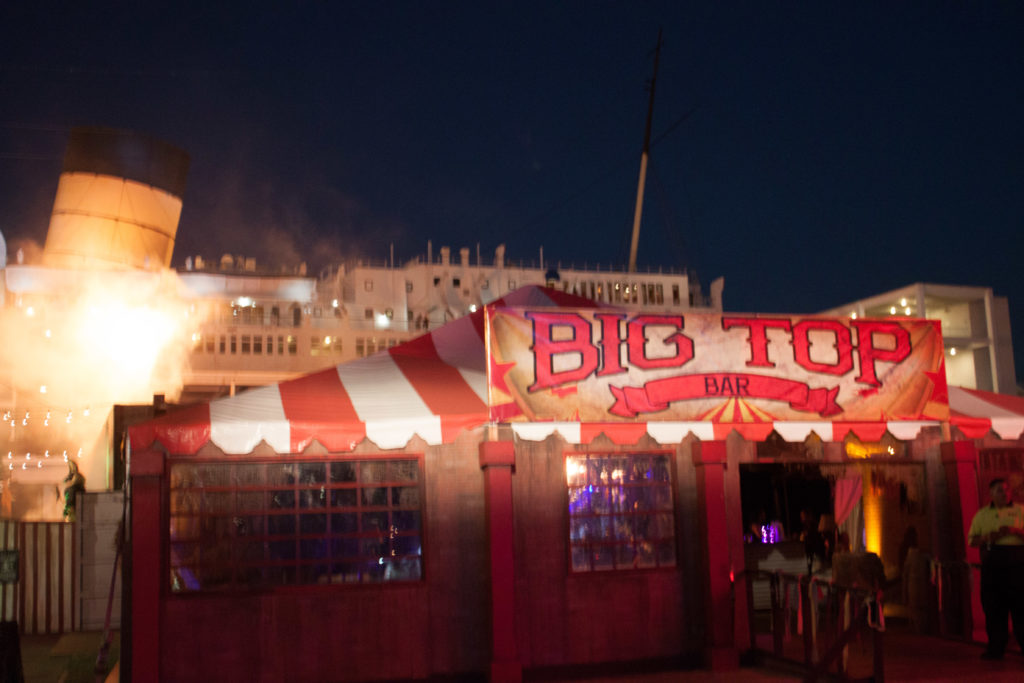 It might be weird to rate the bars and lounges at Dark Harbor, but Queen Mary really expanded and promoted them this year, so we felt it was our duty to sample the bars. (Oh, the sacrifices we make.) It really does feel like Dark Harbor put more of this year’s budget into the bars rather than the mazes. But the payoff there is not great. The maze in Voodoo Village is gone, replaced by a small bar and larger lounge area. There are some strangely flavored vodka shots (pumpkin spice vodka shot, anyone?) and then a pathetic bar with beer and cocktails (no wine). Some effort was put into decorating, but not much. The Big Top Bar is a little better, with very friendly and helpful servers, as was the case with the bar inside the sideshow as well. However, in previous years, there have been specialty cocktails themed to the event, which we certainly missed this year. Much like the mazes, there were good ideas behind these bars and lounges, but the execution seemed cheap and lazy.

We are sad to report that Queen Mary’s Dark Harbor has taken a downward turn for 2016. The new maze was especially bad, and the changes made to existing mazes actually made them worse, not better. The only maze that stayed strong was Deadrise. One asset Dark Harbor does have, though, is great talent. Even under bad conditions in the mazes, the actors were giving it their all. Actors with speaking parts are especially great, especially the barker outside the sideshow. Queen Mary needs to find some creative “new blood” who can breathe some scares back into the mazes. We know it’s possible, because it’s been great before. We appreciate the attention to backstories and characters, but scare timing, lighting, atmospheric effects, and suspense are also necessary.  We know the actors can do it–so just give them something more to work with.