Motel 6 Feet Under is located in a business park in Anaheim, not far from Disneyland, and we included it as a stop on our O.C. haunt itinerary. 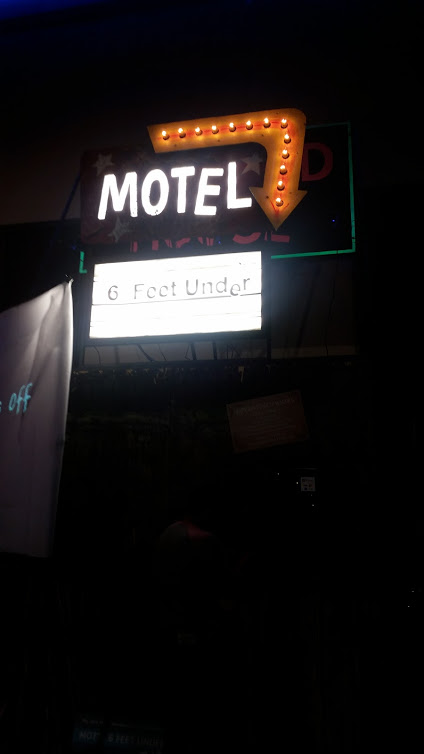 The backstory of the haunt focuses on Mabel, a little girl who haunts a motel and “has enlisted the help of the dead and undead motel staff to keep you in her tourist trap.” The haunt begins with a short wait in the hotel lobby, which is lavishly decorated with props to set the scene of an old motel. After a short wait, we were ushered into an elevator “experience” with a demented and funny porter. Once we exited the elevator, we traveled down a dark hallway, where we were accosted a few times by Mabel herself, a seriously creepy little girl. There are interesting animatronics and props along the way, as well as some good scares from the enthusiastic actors.

Everything seemed to be pretty standard at this haunt until we reached a dead end. We hesitated a few moments before turning back to see if there was an alternate path we missed. There wasn’t. Instead, the path of the maze had actually shifted behind us. This unexpected twist in the standard maze scheme was a great surprise and immediately put us on our toes. We encountered a few more instances of changing walls and paths, until we finally made it out into some “outdoor” scenes, including a giant spider and a train.

If you’re going out to Orange County to see one of the other main O.C. haunts (including Sinister Pointe  and 17th Door), you should definitely add Motel 6 Feet Under to your touring plans.

It may be a small haunt by some standards, but there’s a lot to see inside. In many ways, it felt like a throwback to some of the more traditional haunted houses of several years ago. These days, a lot of haunts are turning to gimmicks and extreme measures to differentiate themselves from the competition, but by sticking to a more standard formula (with a few tricks thrown in), Motel 6 Feet Under was a refreshing change of pace for us. The theme and backstory have great potential for the haunt as it matures. We definitely got the feeling that the haunt designers are passionate and thoughtful about creating unique experiences and scares. We hope to see the haunt return and grow in the coming years.