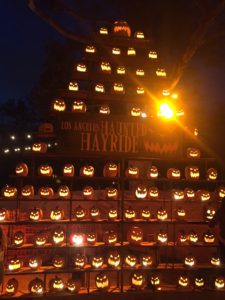 On a brisk October night—well, it was kind of warm, actually—we traveled into the dark of night guided by the light of a full moon, and the oncoming traffic headlights on the 5 freeway, to get to the far reaches of Griffith Park, where the L.A. Haunted Hayride resides.  When we arrived at our destination in the dark side of town, there was a parking lot filled with cars and a long line of people waiting anxiously to get in. From the size of the crowd, it was obvious that the L.A. Haunted Hayride has managed to become one of the more popular haunts in L.A..

It’s been a while since we’ve come here, as the hayride experience had started to become redundant and not very scary to us after going for a couple years in a row. So we decided that this year it would be fun to go back and check it out, since they now have two additional mazes and a new walk-through segment during the hayride itself. They also happen to be only a few miles away from another haunt we really wanted to see, CreepLA.

The atmosphere across the grounds of the hayride, which they call “Purgatory,” feels like a Halloween festival with food vendors, roaming performers, a “Boutique,”  pumpkin carving, light shows, psychic booths, and a “Sacry-Go-Round.”  It’s all well organized and fun. You’ll really feel the spirit of the season after spending a little time here.

We were surprised that they didn’t take credit cards anywhere, not even at the ticket booths, and guests were forced to used portable ATMs in order to get cash if they didn’t bring any. This was a little annoying and inconvenient. It seems that they’re trying to make every last dollar they can by not paying credit card fees and getting kick backs from the rented ATMS. Another interesting thing is all the food served at the venue is vegan, which for us isn’t a problem. In fact, the pumpkin donut holes were delicious.

Of course, before we spent any more time in “Purgatory,” we hit up the hayride and the two mazes. 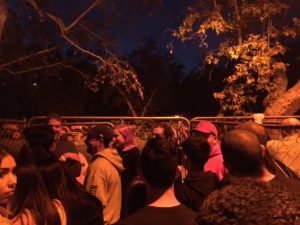 This year’s hayride was promoted as being “brand new with the most innovative theme to date”. The story is we’re now part of a Secret Society of Halloween, and they’re going to take us, in our hay-filled cart, down a dark road where we’ll witness scenes of power and sacrifice, all to bring the night of Samhain to life. Before taking this journey, guests get rounded up like cattle in a chain-link fence holding pen and then corralled into the wagon. The wagon isn’t very comfortable, as instead of sitting on comfy bales of hay, you sit in a thin pile of hay that’s spread across the bed of the wagon.

We did notice a few minor changes in the hayride since we last visited but nothing that was truly “innovative”. Most notably is the section where you leave the hay wagon a few minutes into the ride and walk through an outdoor maze that has one or two startling moments. After the maze section, we were quickly crammed back into the wagon and continued on with the tour. 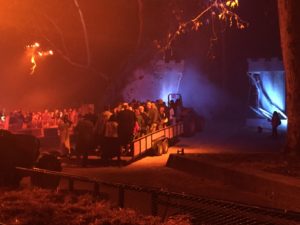 Unfortunately, we didn’t experience anything else that was particularly scary on the rest of the hayride. There are some interesting and elaborate sets along the route and some talented performers who give it a theatrical edge, but we had a hard time following the storyline and understanding what was happening in some of the scenes. The overall theme was lost on us, as the ride begins with a giant Mayan statue telling us we’re doomed and then finishes in a tent where we get attacked by patriotic Purge-like  goons. 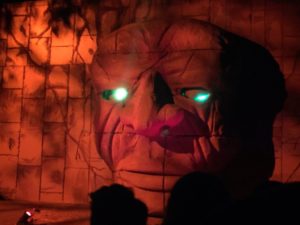 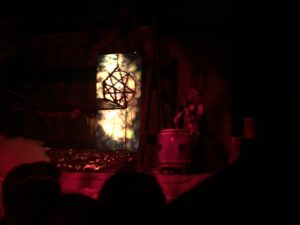 All in all, the hayride is like a riding though an outdoor Halloween store, where you’ll see some cool costumes, makeup jobs, and props on display. It’s all fun, but we wouldn’t want to wait in a long line to check it out. 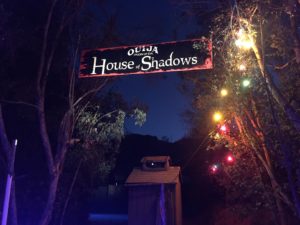 This is a true maze composed of black walls in almost complete darkness. From the name, it’s obvious that they’re promoting the new Ouija movie, so they also included a few rooms that feature scenes from the movie.  These scenes are not at the same quality of Universal’s Halloween Horror Nights mazes, but they still were fun. In the rest of the maze, you have to find your way through  dark corridors with dead ends and monsters lurking in the shadows. This maze was actually pretty fun, and we found it to be a little scarier than the hayride. Overall, this was a fun attraction, but note that the line can get REALLY long. We suggest hitting this maze early in the night (before the hayride) to avoid the long lines. 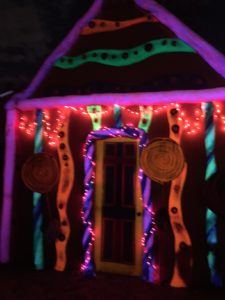 This has to be one the best maze concepts we’ve experienced this season. This maze takes interactivity to another level, where guests have to walk through a spooky neighborhood and literally go trick-or-treating door to door. Each house has its own personality to match the forbidding residents inside. It’s suspenseful and fun when you walk up to a house and have to ring the doorbell or knock on the door, waiting for an encounter with what’s on the other side. If you’re lucky, the resident will award you with some candy before sending you on your way to your next frightful encounter.

This maze was so much fun. We liked the feeling of not being confined to a path and the ability to pick where were wanted to go to get scared. We also liked the different themed homes, which featured just about every kind of Halloween character you could imagine. Getting candy made the experience all that much more fun. For us grown-up haunt stalkers, this maze allowed us to re-create the nostalgic memory of going door to door on Halloween night and the nightmares we had afterward.