The sequel hits keep coming back to HHN Hollywood for 2017.  Insidious: Beyond the Further joins the roster of returning maze themes such as Titans of Terror, AHS, Saw, and Evil Dead. 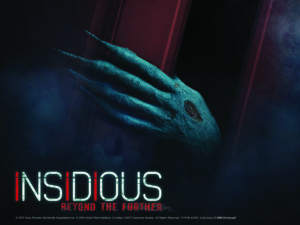 The previous Insidious maze in 2013 was ranked as our top maze for haunt design and effects that year. This time around we will be taken through the horrifying scenes of the first 3 movies in addition to scenes from the yet to be released Insidious: Chapter 4.

The paranormally haunted maze will go deeper into the past of  parapsychologist Dr. Elise Rainier’s, starting with a childhood in which her paranormal abilities emerged until her mother’s untimely death by a demonic entity. Troubled by a lifetime of evil supernatural spirits trapped in the Further – a vacuous netherworld caught between the living and the dead – Dr. Rainier will take guests on an unsettling journey back in time through a portal into the Further to defy the most depraved and intimidating beings that have tormented her since the 1950s.

Insidious isn’t the only Blumhouse franchise that will be featured at HHN.  An all new maze titled The Horrors of Blumhouse will showcase the variety of terrors from the Blumhouse movie catalogue at both HHN Hollywood and Orlando. 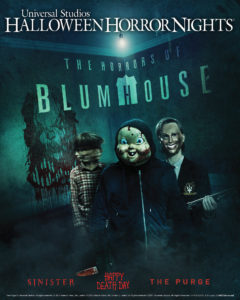 At Universal Studios Hollywood, legions of terrified guests will come face-to-face with the most iconic and unnerving moments from the blockbuster The Purge franchise, Sinister movies and soon-to-be released Happy Death Day. In The Purge, guests will attempt to survive the night as they are immersed in the film’s depraved world, where all crime is declared legal as part of the government’s annually sanctioned 12-hour Purge. In what can be described as a living trailer for Happy Death Day, guests will experience a deja-vu scenario as they are forced to relive the last day of their lives over and over again in an attempt to escape a masked killer. The final nightmare will unmask itself in Sinister, where guests will encounter an ancient pagan deity who is determined to trap them in the sordid shadow world of the dead…for all eternity.

Upon entering “The Horrors of Blumhouse” maze at Universal Orlando Resort, guests will attempt to survive three of the most menacing anthologies in the Blumhouse assemblage. First, guests will face the horror of becoming stars in the next home murder movie of the menacing demon Bughuul, from the infamous Sinister franchise. Then, they’ll run for their lives to escape the gang of bloodthirsty home invaders from the first installment of The Purge saga.  Finally, guests will be thrust into the Further from the Insidious legend, where they’ll come face-to-face with the paralyzing Lipstick-Face Demon from Chapter 1 and witness Dr. Elise Rainier’s own personal hauntings from her nightmarish childhood in a first-look at Insidious: Chapter 4 – in theaters January 5, 2018.