‘Pennywise’ the clown finally arrives in theaters today in the new theatrical version of ‘IT’. The movie is already shaping up to be a blockbuster with projections that it’ll make over $85 million this opening weekend.  They’re also talking about doing a sequel already (wait, he doesn’t die in the end?).

This movie has been heavily marketed over the summer with fun promotional tactics that included “The IT Experience: Neibolt House Hollywood” haunted house.

We recently visited the Neibolt House and it was a pretty fun haunt experience (especially being for free). There were one or two startling moments and some nice special effects used. It was somewhat tamer than the haunts we’ve experienced elsewhere but we should keep in mind that this is setup to try to appeal to the more general public and out of town tourist who stumble upon it while walking down the streets in Hollywood. It’s also a great way to promote a horror movie and we would hope to see more of these kind of promotions.  We rate the “The IT Experience: Neibolt House Hollywood” with a solid 2 and half skulls and think that it’s worth seeing if you’re going to be in the area. 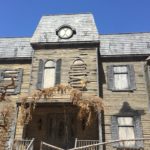 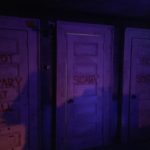 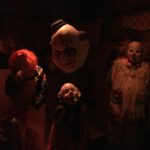 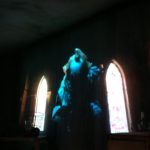 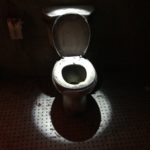 Getting back to the movie ‘IT’self, our friends at Yahoo Movies recently had the opportunity to speak with the master of modern horror himself, Stephen King, about Andrés Muschietti’s cinematic adaptation of ‘IT,’ as well as his thoughts on Bill Skarsgård’s interpretation of ‘Pennywise’ versus that of Tim Curry’s, and what he thinks of Netflix’s ‘Stranger Things’ and his work being an inspiration to the Duffer Brothers. King even divulges on his real overall feelings towards clowns – He says “…clowns are scary. There’s just no way around that.”

Here are a few highlights from the Yahoo Movies interview:

King on Bill Skarsgård’s interpretation of ‘Pennywise’ versus that of Tim Curry’s portrayal in the 1990 ABC miniseries:

“I thought Tim Curry made the miniseries. He did. If Pennywise doesn’t work, obviously the thing doesn’t work at all, you know?…Pennywise is scary in the book, he needed to be scary in that miniseries, and he needs to be scary in the movie. And he is. They’re both good. I wouldn’t pick one above the other. I would just say that Andy [Muschietti] had more to work with in terms of modern technology and, for all I know, budget too. I’m sure he must have had more; I can’t remember what the miniseries cost — at one time I knew — but it wasn’t that much. It was a TV thing.”

King on his feelings about the new ‘IT’ adaptation of:

“There are a lot of movies where, it seems to me, they bought the rights to something because they’re excited about a central situation or some of the visuals that are in the books. And then they do things to it that don’t really have that much to do with the book. I feel like they’re buying the launching pad but putting their own rocket on it — and a lot of times, the rocket blows up. This is not that case. They’ve stuck pretty close to the book, and where things have been changed, the changes make sense. They work.”

King on his feelings towards ‘Stranger Things’:

“I loved that show. The Duffer brothers have pretty much said that I was an influence on their show, so I’m not trying to pat myself on the back. This is something that they’ve said. But they obviously internalized the idea that the characters count. And they also found that sweet spot in American life, which is sort of middle class, and small town, and there’s a textured feeling to those characters.” The small-town bumbling sheriff who stands up for all the things that are good. And Winona Ryder was so goddamn good in that show as the mother. So all those things work, and the kids work.”

King on his true feelings on clowns and being blamed for last year’s rash of menacing-clown sightings:

“I shrugged it off. Because clowns are scary. There’s just no way around that. Clowns can be as angry as they want, and that’s their right — they’re clowns! I mean, obviously they love kids. I came out in support of some clowns in Europe who asked me to say something nice about clowns because they go to hospitals and try to cheer up sick kids. I mean, if I were a sick kid and I saw a f–king clown coming, all the red lines would go off on my gear, because I’d be scared to death! So kids are scared of clowns.”

‘IT’ is in theaters now. You can find the full interview with Stephen King from Yahoo Movies here.