Rumors have been circulating after the recent leak of some HHN marketing materials online that houses based on Poltergeist and Halloween 4: The Return of Michael Myers will coming to HHN in Orlando. It’s also very likely that variations of the themes would also come to Hollywood. 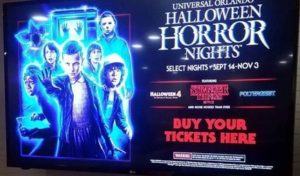 This year HHN seems to be focused on 80’s horror nostalgia with Stanger Things being the central IP thus making Poltergeist the perfect compliment to the lineup. For those of us who were fortunate enough to be around in the early 80’s, the original movie successfully tapped into the fears kids and adults carried with them during those times. These fears included child abduction as Caroline was sucked through the TV set into the “other side” away from her family. There also was familial dysfunction and displacement as the events of Caroline’s abduction led to the unraveling of the family unit with strained relationships and distrust emerging among the members. For kids, there are also the terrors of all the things that go bump in the night from monsters (and clowns) under the bed to the scary shadows of trees reflecting (and crashing) through our bedroom windows at night. For adults, the horrors of being vulnerable in moments of crisis, not having cable TV, and bad real estate investments also manifested in this successful, low gore but high scare movie. All the makings for a fun haunt. 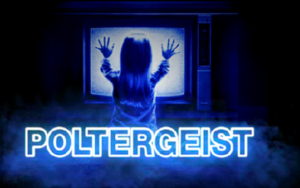 We are a little surprised about them going with the  Halloween 4  theme as opposed to them using the story and settings from the upcoming Blumhouse reboot movie. Maybe in Orlando, they’re going through the entire movie series linearly so Halloween 4 would be the next story in the Michael Myers haunt saga.  HHN Hollywood may still opt to go with the current movie theme if they also have a Halloween themed maze (we hope).

As the title suggests, Halloween 4 features the return of Michael Myers to the film series revealing that Michael survived the fire in Halloween II but has been in a coma since that night. While being transferred back to Smith’s Grove, Michael comes out of his coma and overhears that Laurie Strode, who died in a car accident, has a daughter. Michael escapes the transport and heads to Haddonfield in search of his niece. Fellow survivor Dr. Loomis also goes to Haddonfield after learning that Michael has escaped again and must reconvince everyone that the evil has returned. After slicing his way through more police, trick or treaters and horny teens the town residents rally to turn the tables and hunt down Michael. There are a few scenes from this movie that could provide some good scares such as the scene where a bunch of teens dress up as Michael and surround Dr. Loomis and the cops as a prank only for it to be revealed that Michael was really amongst the group of masked hoodlums. 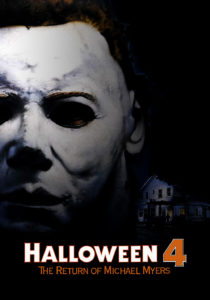 These are all interesting rumors and we’re still hoping that one day we can get mazes based on The Fog and The Funhouse!