Last but not least…

Per the leaked mazes earlier this month, the OG horror icons are coming back in the all-new Universal Monsters maze.  Instead of being “remixed” and Dubstepping this time they’ll be rocking out to an HHN exclusive soundtrack by Slash who previously lent his talents to the 2014 Clowns 3D maze.  HHN fans love the Universal Monsters and this has the potential to be the best Universal Monsters maze we’ve seen yet at HHN Hollywood, especially since this time around it’ll be given its own original maze construction. 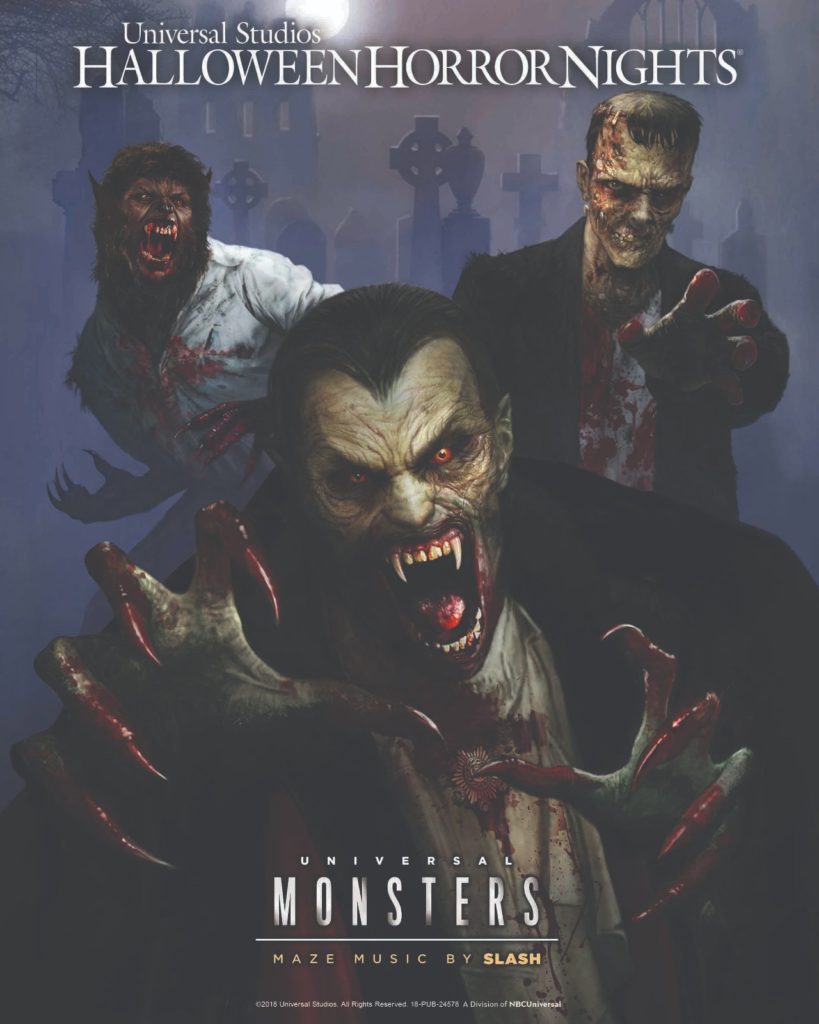 Inspired by Universal’s original cinematic Monsters and the studio that invented the horror film, Universal Studios Hollywood unearths an all-new Halloween Horror Nights maze based on the original “Universal Monsters”…with a terrifying contemporary twist on these classic horror icons. The new maze will also feature an original score produced and composed by celebrated GRAMMY Award-winning musician, SLASH, long hailed as one of the 10 best electric guitar players of all time.

At its core, Halloween Horror Nights is an extension of the horror film legacy originated by Universal Pictures and introduced to audiences in the 1920s…with a staple of classic Universal Monsters that dominated the silver screen, including Dracula, The Phantom of the Opera, Frankenstein’s Monster, and The Wolf Man.

Halloween Horror Nights continues to pay homage to these creatures of the night in this new maze by reawakening more than a dozen of these iconic classic Monsters. The essence of the maze will underscore each of their unique attributes and reimagine them into terrifying modern day characters. At a glance, resurrected monsters will include The Wolf Man, The Invisible Man, The Phantom of the Opera, Dracula, Dracula’s Bride, Frankenstein’s Monster, The Bride of Frankenstein, and The Mummy, to name a few.

By giving each character a unique, complex composition, SLASH’s original score will add a haunting dimension to the experience and help define each of the characters.

“As a fan of horror movies and of Halloween Horror Nights, I jumped at the chance to once again collaborate with Universal Studios Hollywood to produce what might be interpreted as a soundtrack for the maze,” said SLASH. “Similar to the way music affects a film, I wanted to compose a score for the legions of infamous characters featured in the maze to elicit a greater sense of terror for the guests. In the end, the goal is to ultimately make the guests feel as if they are playing an integral role in a classic Monster movie.”

“This maze is the ultimate melding of two of history’s greatest icons – classic monsters and the top guitar player of all time,” said John Murdy, Creative Director at Universal Studios Hollywood and Executive Producer of Halloween Horror Nights. “SLASH’s intuitive understanding of the characters’ struggles brings enormous depth to the maze to epitomize a living-movie experience for our guests.

“This is the second time we’ve had the great fortune to collaborate with SLASH on a Halloween Horror Nights maze,” Murdy continued, “and it is a distinct honor to bring his expertise to the event where guests can enjoy a truly exclusive opportunity.”

The event kicks off on September 14th and runs through November 3rd.