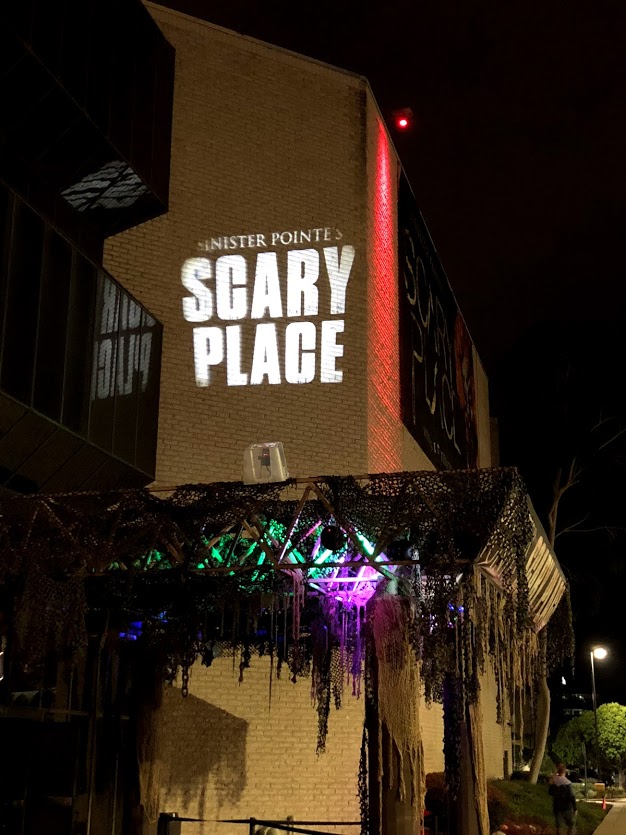 In the crowded Southern California haunted attraction industry, many haunts come and go from year to year. Besides the old stand-bys of the big theme park events (like Halloween Horror Nights and Knott’s Scary Farm), there’s really only one other name that’s synonymous with Halloween in SoCal : Sinister Pointe. They’ve  earned their well-deserved reputation for haunts that are not only very innovative and original, but also truly scary. They’ve also boldly carried out completely new concepts in the haunt space, such as “Dark Markets,” Christmas-themed events, horror-themed parties, spirit lounges, and even a seance show that we loved.

Unfortunately, things seemed a little bumpy for Sinister Pointe over the past couple of years. In 2016, we were disappointed with their Halloween event, which felt put together at the last minute, and we didn’t feel it was up to their own (admittedly high) standards. With no walk-through attraction in 2017, we worried about their future. So when news surfaced this year that they’d be back, and bigger than ever, we put Sinister Pointe’s Scary Place at the top of our most-anticipated haunts list.

For 2018, Sinister Pointe has taken over three levels in an abandoned Macy’s in the Laguna Hills Mall. The event includes three haunted attractions (two walk-through mazes and one dark ride) as well as two scare zones. There are also vendors selling a wide range of horror-themed products, plus food trucks.

This interactive maze takes victims through representations of common fears and phobias. Each room is a stand-alone scene of a specific fear, and includes things such as dentist’s office, crematory,  a room full of exposed wires, and clowns. To get through the scene, your group will have to face their fears and push buttons, sit in the dentist chair, crawl through an oven, and so on. Our group was split up during this maze and we ended up going through alone during the second half, although this didn’t seem to be the case for everyone. Overall, this maze harkens back to Sinister Pointe’s previous attractions, such as SAW and Fear, but we felt that the scares were milder in comparison. Overall, this was a fun maze with a few good surprises and some really good actors. A solid return of Sinister Pointe’s trademark interactivity. 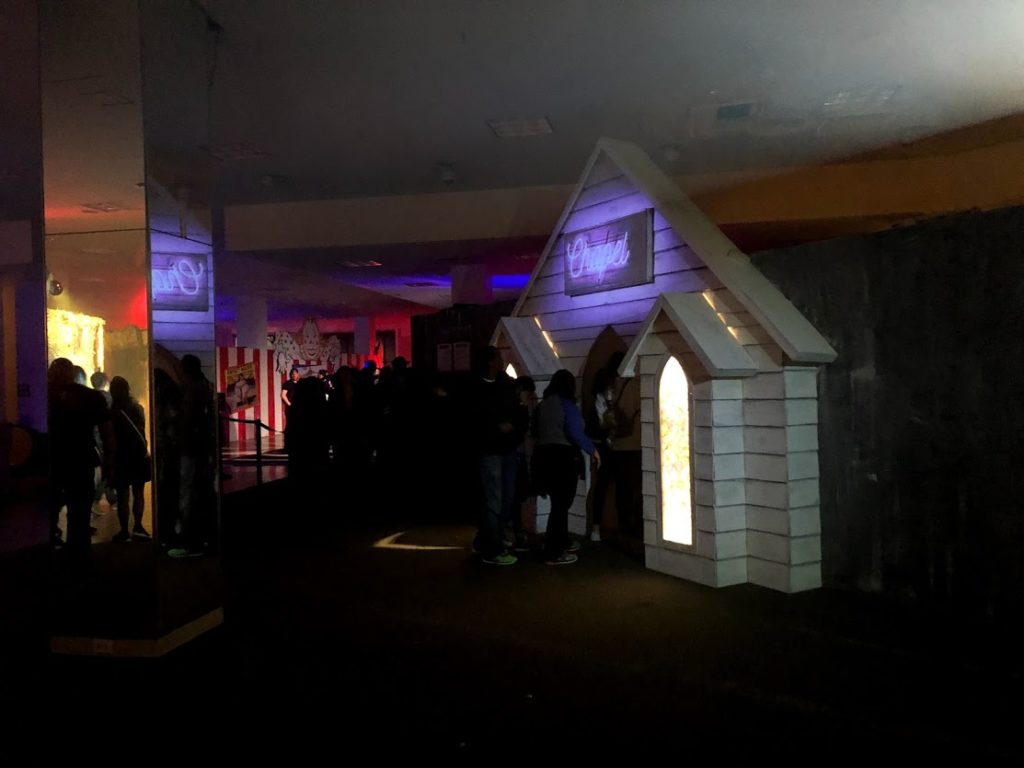 This maze tells the story of a creepy hotel. It started with us being led through the storage room, where we boarded a freight elevator helmed by a demented bellhop, who warned us about the evils on the hotel’s second floor. This was a great use of Macy’s actual freight lift, which was actually creepy enough that it didn’t even need extra lights or music to set the sinister tone. Upon exiting the elevator, we made our way through an abandoned hotel dining room and then through the halls of the evil hotel itself. The sets here were well designed, and we truly felt like we were snaking our way through hotel hallways and rooms. This maze used a good combination of static props and actors, and the effective lighting was distracting enough that it was sometimes hard to tell whether an actor was real or a prop. However, after a while, the scenes became a bit repetitive. The monotony was broken up by a security guard scene and a “behind the walls” path that made things interesting. Overall, though, we felt that a bit more variety in the maze would’ve livened things up a bit.

Boogeyman Express is where Sinister Pointe gets truly interesting this year. Once again shattering expectations of what can be done in a haunt, SP has devised a completely unique haunted attraction they bill as a “dark ride.” The entire ride is hidden on the third floor, and you won’t have any idea what to expect before you actually board the vehicle.

This ride takes groups of 4 in a mine car, which is pulled behind a small golf cart-like vehicle. A tour guide takes you through a small town that has been overtaken by an evil presence. The scenes are highly varied, ranging from an old mansion, to a church, to a mine shaft, but the backstory is well crafted and the settings flow together. There are some good scares in here, and the mine car moves along at a good speed (sometimes even surprisingly fast!). We were actually blown away by the fact that this ride achieved a truly spooky feeling on the third floor of a department store.

Boogeyman Express was the true standout of the night, and the long lines reflected that. If you purchase general admission, you will need to obtain a timed ticket for this attraction and be prepared for a long wait. But it’s definitely worth it, and this attraction is not to be missed. 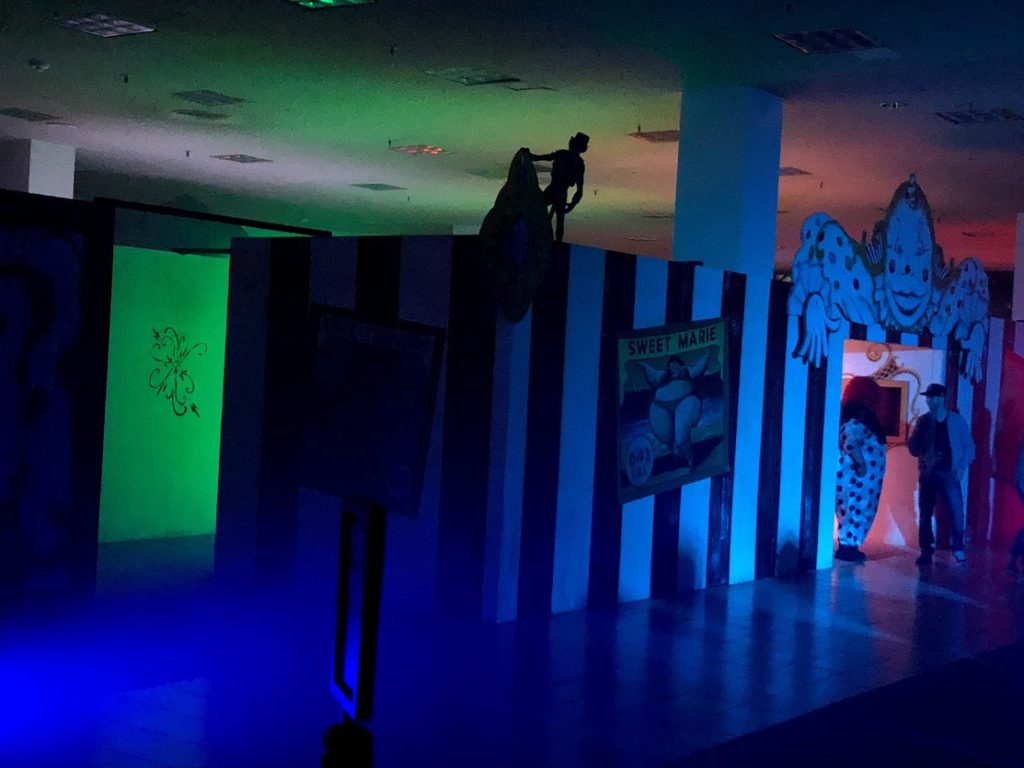 In addition to the mazes and dark ride, Scary Place also includes some really cool vendors and games, including a mini escape room (only $1!). A stage near the back of the space showcases live bands and magic shows. There are also plenty of free photo ops (including a free photo station). Two scare zones are fun to wander through while taking photos and videos. Roaming scareactors entertain the crowds and pose for photos. 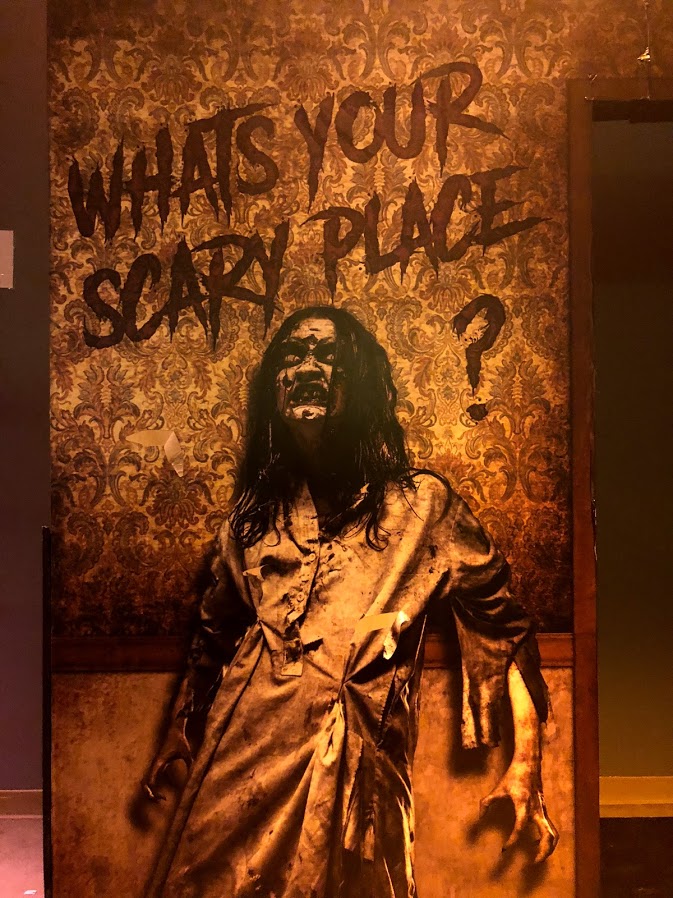 Sinister Pointe has done a great job creating an atmosphere that makes you want to hang out. We attended on a Saturday night, and although the lines for the mazes were somewhat long (but not crazy), the overall space itself was large enough that it didn’t feel crowded at all. It had a great laid-back, fun vibe. We can’t help but compare Scary Place with HorrorWorld, which is also located in a mall and includes multiple attractions and vendors. While we loved HorrorWorld’s Into the Black attraction, we think Scary Place has the edge in being the event we wanted to spend more time at. We definitely recommend a visit to Sinister Pointe’s Scary Place this year.

We recommend purchasing the all-night VIP pass if possible. You’ll definitely want to go through the mazes and dark ride more than once. It will also help you avoid the long line for Boogeyman Express.

Sinister Pointe’s Scary Place is open Thursdays through Sundays as well as October 31. Tickets are now on sale.

Be sure to check Groupon for daily deals.