Walking up to the 17th Door Haunted Experience, the first thing you’ll notice is the abundance of signage warning you about the attraction. “This is a physically demanding and potentially dangerous attraction,” according to a giant sign on the chain-link fence that surrounds the queue area. “TRIGGER WARNING” shouts another sign, which warns you that you’ll be exposed to sexual assault, infanticide, insects, and small spaces, among other potential horrors. One small relief provided by these signs, however, is that the weapons used inside are only replicas. Phew.

And if that’s not enough, all guests (or victims) must sign a detailed waiver, acknowledging that you could be hurt, shocked with electricity, and even shot with projectiles that may leave welts and bruises.  Oh, and if you die, it’s not their fault. 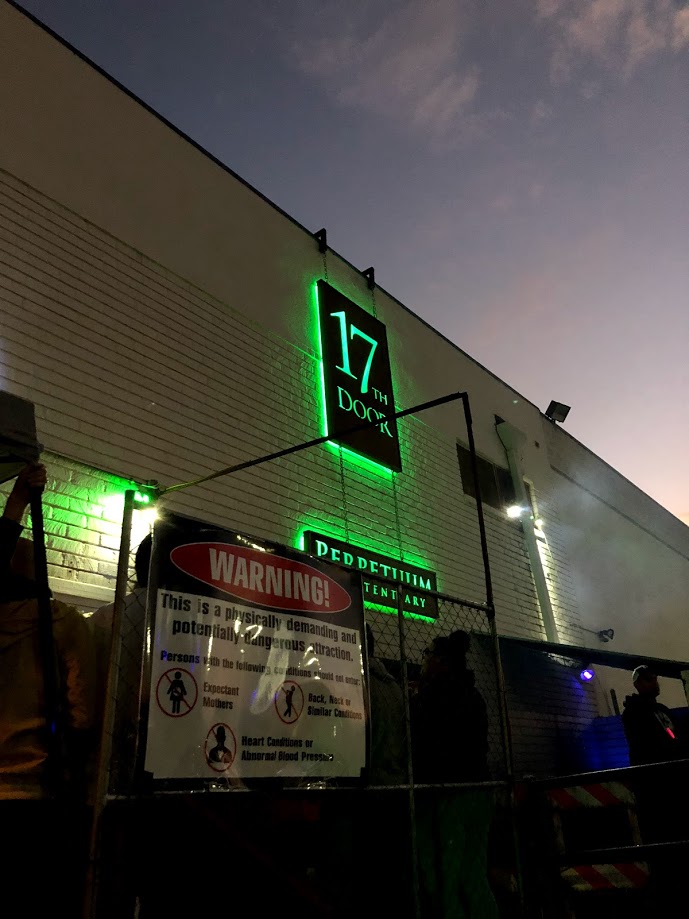 In reality, these warnings are somewhat truthful, as 17th Door is currently the most extreme haunt in Southern California. But they’re also a clever trick to help amp up the anxiety and anticipation as you wait in line. While we do think 17th Door is suited for more advanced haunt stalkers or those looking for a more physical thrill experience, rather than first-time haunt visitors, overall, it’s not too extreme and can be handled by most people.

This year, 17th Door takes up residence in the back of a strip mall, which was actually the location of Sinister Pointe in 2016. This year’s story once again centers on Paula, the hapless young woman who was a raped and then found herself pregnant with a baby she didn’t want to, and couldn’t, care for.  Paula murdered her infant and is now locked up at Perpetuum Penitentiary, where the poor conditions have caused her to sink further into desperate madness as she sits on Death Row. As a new inmate of the penitentiary, you’ll get a first-hand look into Paula’s hell and experience it along with her.

In our opinion, Paula’s story is the most depressing we’ve ever encountered in the haunt world. Although the attraction paints her as “evil” and “perverse,” it’s hard not to feel bad for Paula, who seems to have fallen into her situation undeservedly. Not to mention the fact that the story also features a dead baby, whose face pops up continuously throughout the experience. We’re generally not that sensitive to topics of haunts and feel that almost nothing is really off limits when it comes to haunts, but the backstory here is so miserable that it actually makes the attraction less “scary.” However, it is effective in making you care about Paula as a character, which adds surprising bit of empathetic nuance to such an “extreme” experience. 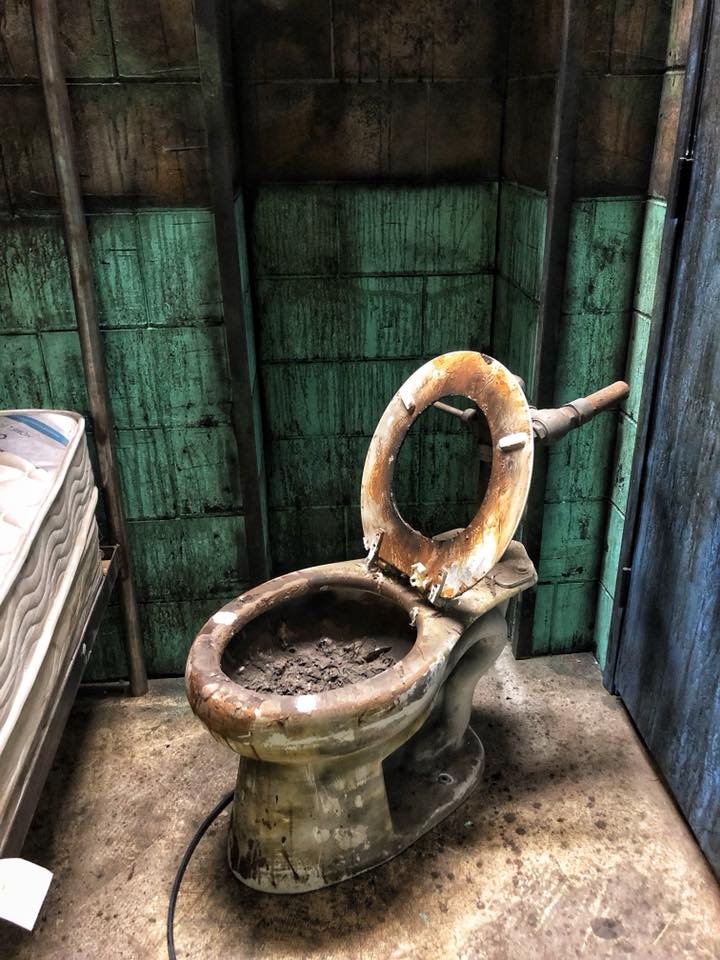 The first scene was (appropriately) the admissions room of the prison. We were given the rules and manhandled by some very good actors.  The attraction supposedly has 17 rooms, and hence 17 doors to go through (but we saw a door numbered “18,” but who’s counting?). Small groups go through the attraction room by room, and each scene is appropriately timed, with doors that can’t be opened until a green light goes on.

As we made our way through the attraction, we interacted with guards, (nearly naked) inmates, prison psychiatrists, and of course, Paula herself.  Paula, who isn’t adjusting well to prison life, carries a small doll that represents her dead son, Lincoln. We see her attempts at art therapy, which turns into a psychotic gallery when the lights go out. Other stand-out rooms include a putrid bathroom, an execution chamber complete with electric chair, the guard’s locker room, and the firing squad gallery.

Nearly every room had its own mini-story,  complete with either a scare or some kind of physical interaction. Despite the large number of rooms and characters, the scenes managed to adhere to the overall story very well. Although prison settings are nothing new in haunted attractions, 17th Door has made Perpetuum Penitentiary a fully immersive experience. We were impressed with the level of set detailing in each room, as well as with the variety of lighting, sound, and fog effects that seemed perfectly timed.

Although we don’t want to give away any of the big surprises, we will let you know about some of the “physically demanding” aspects of the attraction. First of all, if you have serious claustrophobia, this attraction is not for you. There are several moments that require squeezing into small, dark spaces. (However, if you’re a larger guest, don’t worry–they can accommodate you.) There is some mild electricity as well. However, the “surprise” of it is probably worse than the actual shock. They also warn you about insects, but we didn’t see any live insects in the attraction. There was a single scene in which an actor appeared to be throwing insects on guests, but it was dark and we couldn’t see what the objects actually were.

As we drove to 17th Door, we actually found ourselves feeling a bit of dread. Not because we were scared, but because we weren’t exactly looking forward to being physically tortured. We’re actually not fans of extreme haunts. MacKamey Manor, Blackout, Alone–we don’t really consider these to be haunts. But 17th Door straddles the line in a very smart way. Their detailed sets rival some of the best haunts, and they do throw in a good number of jump scares to relieve the tension and elicit some laughs throughout. But the main draw is the physical stunts. Shocks, falls, pushing, getting “shot” at– you can’t do these things at just any haunt. But at the same time, we don’t find these things to be scary. exaxctly  But for those looking for something a little out of the ordinary and want to push their boundaries a bit, The 17th Door is perfect.

17th Door is open through October 31. Tickets are now on sale.

17th Door also offers a VR experience for an extra charge ($13), which we did check out.