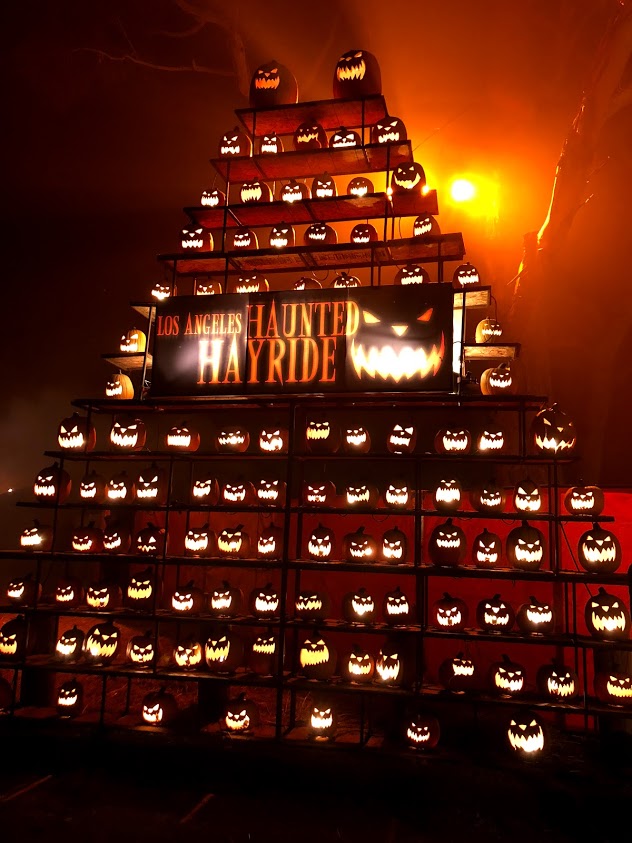 In 2009, the Los Angeles Haunted Hayride (LAHH) made a somewhat quiet debut at King Gillette Ranch in Calabasas as the first large-scale hayride attraction in Southern California. Sure, there were a few local farms offering hayrides, but they just didn’t live up to standards set by the many famous East Coast hayride attractions (such as Headless Horseman or Bates Motel). After earning great reviews in their first year, LAHH moved to a more central LA location: the Old Zoo at Griffith Park. Their dedication to providing an excellent attraction combined with heavy marketing (and promotion of celebrity attendees) made their event one of the top “must-see” Halloween attractions in the area. 10 years later, they are still unchallenged as the only major hayride in California.

In addition to the hayride, the event also includes two walk-through mazes and event grounds (“Purgatory”) populated by roaming scareactors and shows. Now, let’s take a roll in the hay and get to the review! 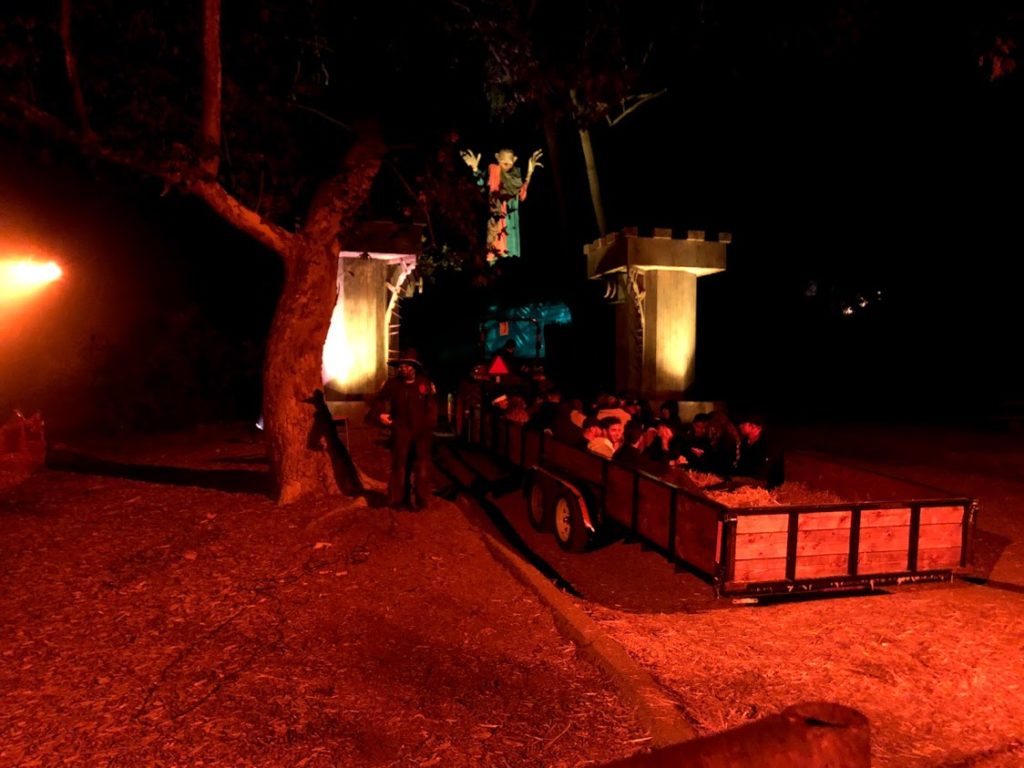 The theme of this year’s hayride is, appropriately, “10 Years.” Instead of a single theme or backstory, this year’s ride plays like a “best of,” featuring scenes and characters from the past decade. This was a smart change in direction, because creating a coherent story line has proven to be difficult for many hayrides, not just LAHH. By abandoning the constraints of a single backstory and instead featuring stand-alone vignettes of horror, the hayride has become a lot more fun as well as more scary. The 10-year theme has also enabled them to feature all their best props, sets, and masks in a way that doesn’t feel forced. This freedom keeps the riders from having any idea of what might be coming next, increasing the suspense and surprise. And if you don’t like one scene, chances are the next one will have something to scare you. 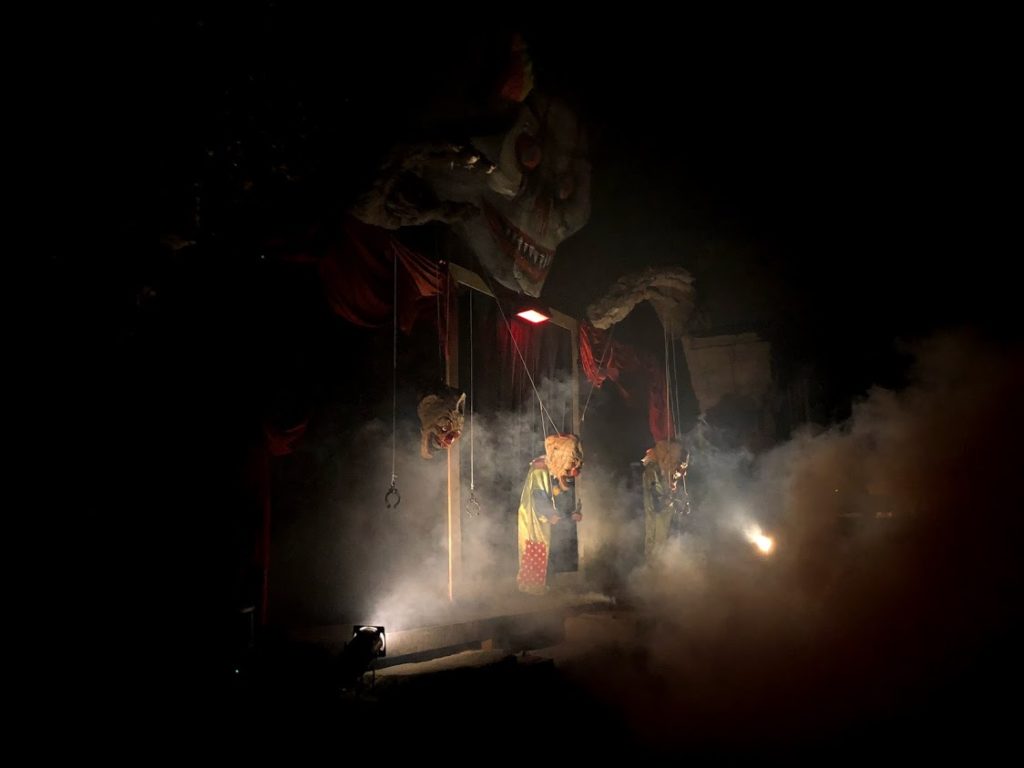 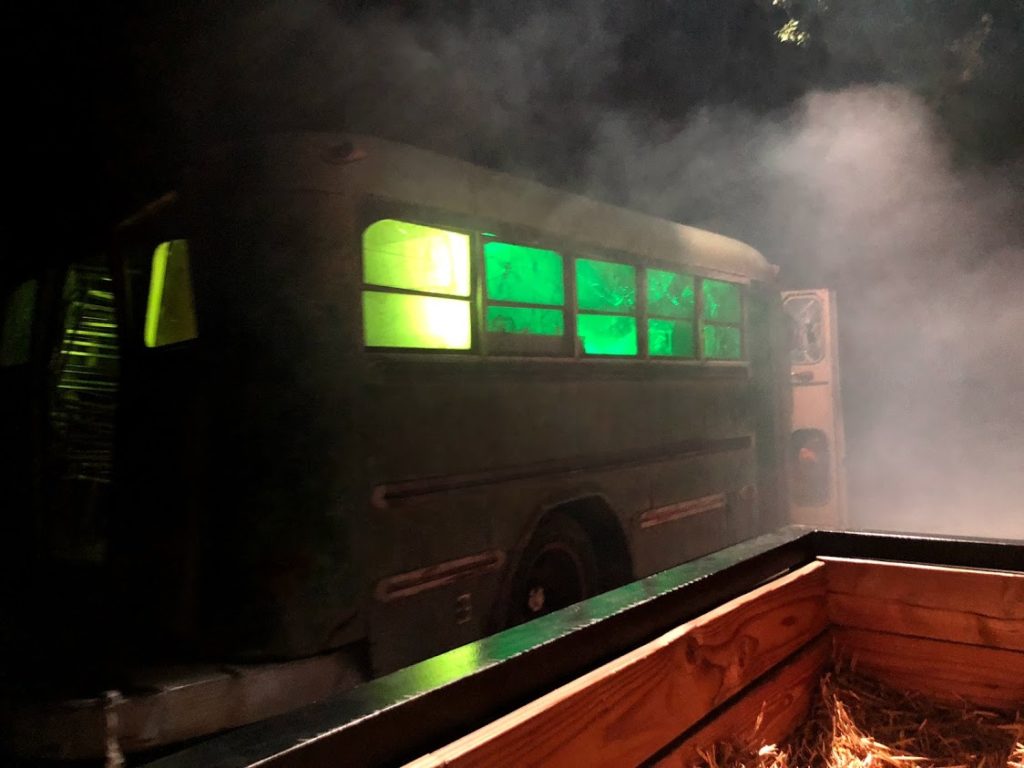 The hayride begins with a journey through the fog. As you leave the grounds of the Haunted Village below, you are quickly bombarded by one scene after another, which vary widely from a spooky church scene, to an amusing  game show of death, to a terrifying tent full of demented clowns. We were struck by how well-choreographed the actors were in each scene, as some effects required very close synchronization to get the effect just right. The actors also used each other as distractions; while one actor terrified guests from the left, another silently snuck up on the other side for a scare. The energy level was high in nearly all scenes, with creatures running after the trailer, jumping on the rails, and leaning far into the crowd as guests scrambled to get away. This was the best group of actors we’ve seen on the LAHH to date.

Although the LAHH tried its best to conceal the actors in the shadows and use surprise tactics to elicit scares, we just didn’t find it to be that scary overall. This might be just us–maybe we find the confines of the twisted hallways of a walk-through attraction to be scarier than sitting in an open trailer. But with a hayride, the actors are limited to jumping on the sides of the trailer, and the suspense that is needed to create an effective scare is just really hard to pull off in this setting. However, the LAHH provides a great spooky, Halloween atmosphere with plenty of eye candy to make it well worth the journey. 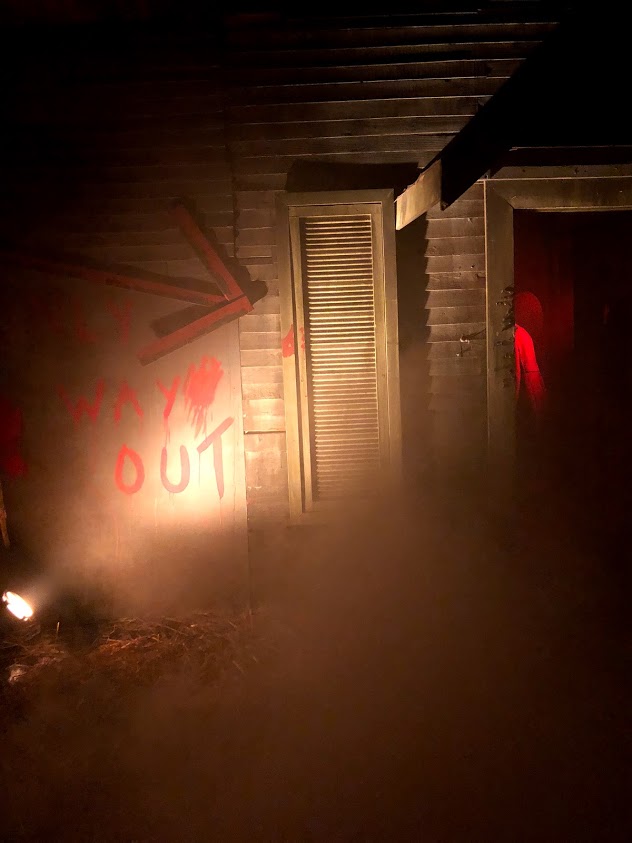 Treat or Treat returns this year as one of the most unique walk-through attractions at any Halloween event. Very small groups are let onto the trail, which resembles a rambling path through house-like facades. Guests have to knock on the doors, where they will get a treat (piece of candy) or a trick. The tricks are, of course, the fun part here, and these scares can be really effective. We definitely screamed more on this path than we did on the Hayride. Trick or Treat is not to be missed, and the long lines are a testament to its popularity.

This bare-bones walk-through has one unique thing going for it: it’s an actual maze. And you will get lost. The plain black walls and headache-inducing strobe light ensure you’ll be disoriented and begging for the exit before long. Monsters lurk in the shadows and behind walls, and they purposely lead you in the wrong direction. This maze is a fun distraction but is probably not be worth it if there’s a long line. 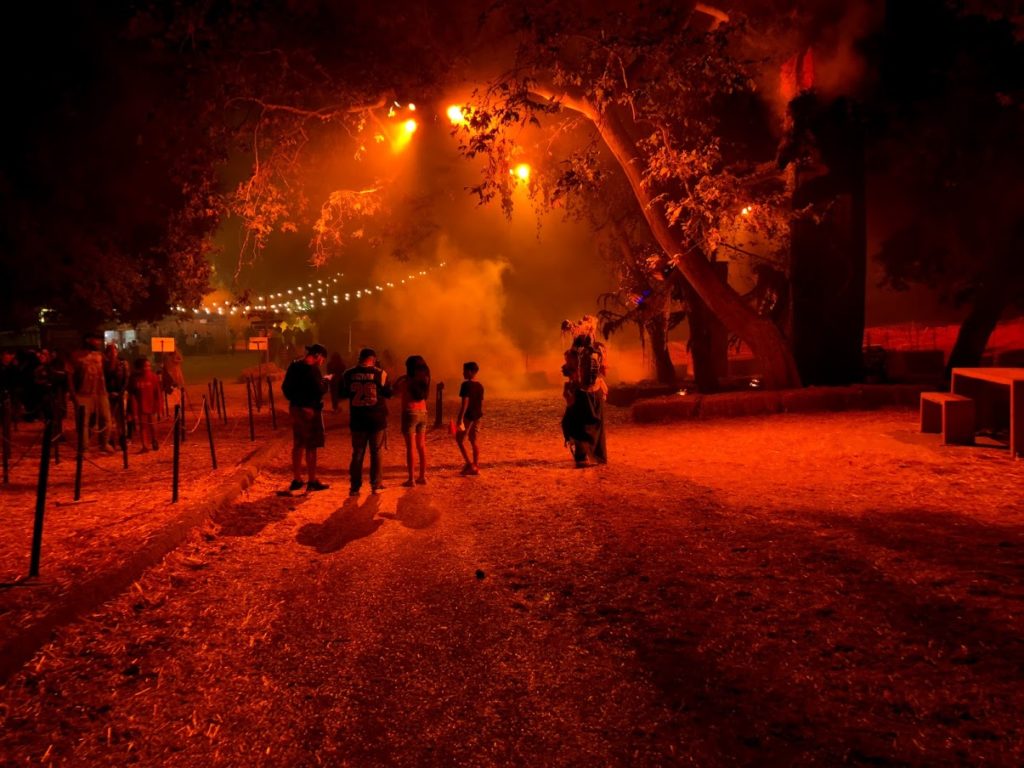 The Los Angeles Haunted Hayride continues to be a solid Halloween offering and is a great choice for anyone looking for something a little bit different than the standard walk-through haunted house. There’s plenty to do to fill up your evening, and the Purgatory grounds are full of Instagrammable spots. The vegan offerings at the food truck are delicious, and there’s plenty of free parking. We attended late on a Sunday evening and found the hayride line to be completely empty, although there was still a healthy line for Trick or Treat. Attending later in the evening or during the week is a good option if you want to avoid the lines and the need to buy a VIP ticket.

LA Haunted Hayride is open through October 31. Tickets are now on sale.