Last year Universal Orlando’s HHN Orlando grindhouse-themed house Slaughter Sinema featured Attack of the Swamp Yeti as one of the mirco-themes within the haunted house. For 2019 the mythical monster will be fully unleashed in a frightening new take on the fear-inducing folklore of the Yeti. But beware, because this experience will trade B-movie scares for bloodthirsty terror that will send you running in the opposite direction. The snow will be red with blood in the Yeti: Terror of the Yukon haunted house.

Story
Deep in the remote tundra of the Yukon, loggers, and trappers seek refuge from the frigid grip of an arctic blizzard. But out in the darkness, a terror lurks far more dangerous than the deluge of snow and ice. These unfortunate souls have intruded into a territory that is haunted by their worst nightmares. Enter a logging camp that’s been torn apart, floors caked with snow, bones and gore. Right outside, screams are frozen on the faces of those who fled the towering monsters only to succumb to the elements. But there is no escape from beasts as brutal as the winter.

The Yetis
Just when you thought the only thing to fear was the elements, an icy terror will descend over you. Cringe at the trail of blood leading to caves none have lived to see. As you enter the labyrinth of caves, you’ll hear the screaming echoes of those who couldn’t escape the inevitable. If you survive long enough to see the end, you’re likely to find the remains of those who came before you and meet their same demise. You’re in Yeti territory now. They’re stone cold vicious and will stop at nothing for a taste of blood. If the cold doesn’t get you, they will. 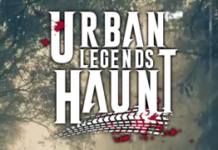