We’ve been closely following the development of “Dark Horizon: Point of No Return,” ever since we first heard about this brand new haunt coming to Florida for 2019, from the creators of the Queen Mary’s Dark Harbor. Some details were revealed at this year’s Midsummer Scream convention and the Dark Horizon website is now live, giving us a full look into this new haunted attraction that hopes to grab some of the business away from Halloween Horror Nights and Howl-O-Scream.

The theme of the haunt is rooted in Florida’s past, focusing on pirates and vodou, as well as exploting its swampy setting. Because they’re a smaller haunt with just three haunted houses, they’re very smart idea to maintain a consistent theme througout their event, which will actually help make the experience seem bigger. Here are some of the most intriguing details:

Ghostship: Explore a “phantom ship” that is not exactly abandoned. “Lurking below deck are a band of crazed pirates and redcoats suffering from Botulism and starvation and left for dead. These deranged and infectiously diseased seamen stand between you and the safety and salvation of your own brigade. Will you live to tell the tale or will the Pirate Captain and her derelict crew be your demise?” With the retirement of “Deadrise” this year at Dark Harbor (another phantom ship themed haunted house), we wonder if some of the sets are being shipped cross-country for a new life at Dark Horizon.

Murder Island: “In the sinister swamplands of the Everglades lies The 10,000 Islands amidst the mangrove-choked rivers. The area is a hotbed for murderers, ancient creatures and bizarre tales.” In this house, set in the early 1900s, victims will come face to face with “Bloody Ed Watson,” the sugar cane baron who is said to be responsible for the murder of at least 57 people. This house has the potential for some good scares.

Vodou: Voodoo is a popular (and sometimes overdone) theme in haunts, with the “voodoo priestress” trope has been nearly done to death. But with the right set dressing, it can be creepy and unsettling. This is the house with the most to prove, and if Dark Horizon wants to prove itself in its first year, it needs to come up with a new angle on this theme.

But there’s more to Dark Horizon than just the mazes. A full lineup of scare zones, entertainers, and immersive bars will round out your evening. There’s also a 4-D maze experienced called “Panic!” (We’re not really sure what a “4-D maze experience” is, though.)

The haunt will be located in the back lot of the Holiday Inn Suites Orlando Resort-Water Park. There will not be parking available on site. You’ll need to park in a separate lot and take a shuttle to the event. Details on the parking location are not yet available, so be sure to check the Dark Horizon website before you go.

Ticket prices start at $25, and we think this is a pretty good deal. For Florida residents who have really have had only HHN or Howl-O-Scream to choose from, Dark Horizons will be an intriguing alternative this year. To buy tickets, visit the Dark Horizon website. 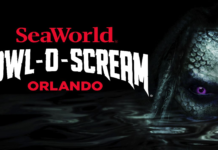