This year is a horror movie come to life so no one needs to pay to get scared but for haunt stalkers going to a haunt is a reprieve from the terrors of the real world. It’s actually been proven by psychological research that horror fans seem to be doing better at coping with the pandemic because we have a morbid sense of curiosity. So in an effort to remain resilient, we’re looking for anything scary we can do this haunt season. That also means that we’re likely to be at greater risk of being exposed… to lesser quality haunt offerings.

In the early summer, we started to get the bad news that our favorite theme park and local haunts would be closed due to the ongoing strict COVID-19 regulations here in California. The regulations disallow just about every key aspect of a haunted attraction; being inside confined places, touching things, gathering in crowds, being within 6 feet of other people, and screaming out. However, with some quick thinking and a little ingenuity, haunt operators started coming up with new schemes ways to keep Halloween alive.

Had you told us a year ago that in 2020 we’ll be writing reviews about a ‘Drive-Thru Haunt’, we’d say that you had inhaled too much haunt fog. Well, here we are, desperate to just get a sniff of some haunt fog so we’ve resorted to paying $70+ to drive through a fairground parking lot to watch some people run, scream, and dance around to music in some strobe lights and fog for 23 minutes. Yup, this year ‘Drive-Thru Haunts’ has sadly become a thing.

Urban Legends Haunt was one of the first haunts to announce that they would be doing a haunted drive through experience in Southern California. Located at the OC Fairgrounds, Urban Legends is promoted as being a Drive-Thru Halloween haunt where “scare seekers will experience theatrical, immersive story-telling and terrifying sets” while being “entertained by live performances through-out their drive” with “interactive show zones and an immersive show of lights, sound, special effects, and monsters”. While we knew this wouldn’t be as scary as walking through the dark and foggy corridors of a maze it had the promise of being something unique and fun to do for the Halloween season. Unfortunately, it turns out that we could’ve had a bigger Halloween thrill by walking down the seasonal aisle at a grocery store.

Getting into the parking lot was somewhat disorganized but once they opened up the entrance the check-in was quick. Then we were directed into a lane but didn’t realize that the actual experience was already starting around us. In the first scene, we drove past an ‘Urban Legends Drive-in Theater’ sign and were directed to park (too) closely behind other cars stacked in multiple rows. A movie reel about California-based Urban Legends was playing on a big screen as we sat and waited. People dressed up as 50’s diner waiters came up to the car and we thought the scares were about to begin but instead, they just asked if we wanted to order any concessions. We guess some of the food options did look scary. Again, we thought this area was a preshow staging area but it turns out we were already in what they considered to be the haunt! When the movie ended all the roaming waiters froze and acted like they were being possessed by some static on the screen and then nothing happens. It just ends with them standing there looking at the screen.

The traffic jam of cars was directed to roll forward to the next area with a bunch of shipping containers and hanging tarps. Here we could hear the sounds of screeching bats and dripping water so we guess we were supposed to pretend that we’re now inside of a cave. After all the cars parked some people started walking around the cars in miner outfits with pickaxes for a few minutes and then we were directed to roll forward to the next set.

The third scene looked like a Christmas tree lot the day after Christmas. It had a few shrubs and trees along with some picnic tables, tents, and plastic deer scattered around. People dressed up as hikers or park rangers started yelling out for each other over megaphones while someone in a Spirit store looking gorilla Bigfoot costume was roaming around. There was a slight build-up as the hikers frantically yelled amidst the recordings of some animal snarls and growls so we thought maybe things were about to get a little interesting but nope they just kept running around. After a few minutes of this, one of the campers and Bigfoot went inside of a tent and it started shaking. Seems like Bigfoot and the hiker were going to be the only ones getting a thrill tonight.

With our engines back on, the car parade rolled forward to the fourth and final scene. Here there was choreographed dancing to some Dubstep-House music for a few minutes. The dancers weren’t bad but the rest of the setup was. At the end of the routine, they all started to chant Bloody Mary and the back of a truck opened up and Carrie’s estranged cousin, Mary, stepped out. After that it was cars back on, thank you for the $70, and goodnight.

While we didn’t think Urban Legends was going to be jaw-droppingly scary we didn’t expect it to be jaw-droppingly lame. What was most disappointing is the fact that there was very little interaction with the monsters around the car. We thought they would be taunting and creeping upon us. There were so many missed chances to startle us such as when a monster was walking by on one side of the car another could’ve snuck up on the other side for a scare. Last year one of our biggest scares was at The Fleshyard when a monster snuck up on our car in the parking lot. At Urban Legends there were no memorable moments and they could’ve done a better job at designing this attraction. It disappointingly felt more like an attempt to just make some money off of those who miss going to haunted houses this year, instead of being a sincere attempt to create a unique and fun Halloween event. The concept itself had promise and could work if it was executed differently so we won’t give it a buried skull but we also can’t recommend this as something to spend your time and money on unless you’re really desperate to get out of the house, which we probably are. 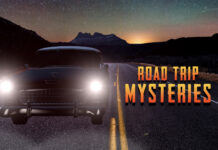