After surviving some intense rains that pounded the east coast earlier this week, it’s now raining blood at the Hotel of Horror located in Saylorsburg, Pennsylvania.  Completely redesigned for the 2010 season, this haunt is now featuring 2 houses, the namesake  Hotel of Horror and the new Altered Nightmares, where the 7 deadly sins come to life. 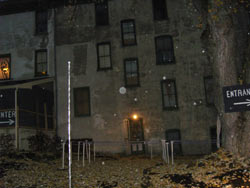 At one time, the premises of this haunt were actually a real hotel. Now as a haunted attraction, there are reports from workers that the building is actually haunted. This could be just a story to add to the lure of the haunt, but the stories have been consistent over the years with workers reporting that they have experienced some very eerie and strange occurrences after hours. It’s even reported that some workers refuse to be alone in the building after hours.

Whether it’s actually haunted or not, this house is a very scary, promising to offer one of the most intense haunted attractions on the east coast.  We look forward to hearing some trip reports from our fellow Haunt Stalkers out there. Their 2010 haunting continues through Halloween night.