Reign of Terror began as Bruce Stanton‘s humble yard haunt in Thousand Oaks way back 2000, and then somehow made its way inside his house itself. It was pretty much the ultimate yard/home haunt in Southern California. In 2008, it grew too big for any yard or house, and it moved to a city building. Last year, it made its way to the Janss Mall, and it returns this year to the same mall, in a slightly different (and we think better) spot. 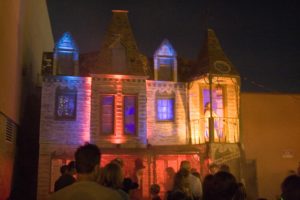 Facade from 2009: It’s even more impressive this year!

The haunt is located in the Janss Mall in Thousand Oaks, California, in the upstairs space above Gold’s Gym. After getting our tickets, we followed the signs and entered a nondescript door in the side of the building and proceeded upstairs. There were a couple of monsters to greet us at the top, and they “welcomed” us into the queue area. From the minute we stepped into the queue, we knew that this was no average mall haunt. (It’s really saying a lot when we claim that the line for a haunt is excellent.) The line is sandwiched between the detailed facade of a weathered, Victorian-style house with creepy figures in the windows and on the other side by rows of hay bales with jack-o-lanterns; the line goes right through a decrepit barn with hanging corpses. The queue room is dark, and a flash of lightning every so often completely sets the mood. In addition, some roaming monsters entertain by scaring people in line.

Reign of Terror definitely has the best queue of any haunt we’ve ever been to. However, the line is long and slow. But there’s actually a great reason for this: They let only one party into the haunt at a time. You’re pretty much guaranteed to have the haunt to yourself, which is another reason why the haunt is so awesome. However, if you’re impatient like us, you can always opt for the front-of-the-line pass (an extra $7, which we found to be well worth it). If you don’t want to pay for front of the line, try to get there early. This is a popular attraction, and there will be a line.

Greeting us at the door of the haunt (and you actually do enter the haunted house via a very realistic front door) was an actress dressed as a witch. She bantered with guests and put us in great spirits before we entered.

The haunt itself takes you through many, many rooms of an old house; from the living room through the dining room, through the kitchen, into a bedroom, and so on. There are so many different scenarios that it’s hard to recall every one and impossible to list them all here. But despite the constant movement from room to room, the haunt doesn’t lose its sense of coherence or story. This is definitely an old haunted house, with terrors lurking behind every door and in places you might never expect.

The most striking thing about Reign of Terror is its amazing attention to detail. There is not one bit of plywood wall to be seen. Every inch of the haunt is richly themed, from wallpaper, to carpets, to dishes in the sink, to pictures on the wall. The haunt includes changes in temperature and the use of scents. The lighting is also very well done. My favorite scene in the haunt is a simple one, but something that just completely captures what “haunted house” says to me: a long, narrow hallway, with doors on all sides. As you advance down the hall, the lights behind the doors begin to glow, and the doors start to rattle. A brilliant scene; my favorite of any haunt I’ve ever been to.

This haunt rivals anything at Universal, and in a lot of ways surpasses some of the mazes at Halloween Horror Nights.

Once out of the haunted house, we immediately entered the new attraction for this year: The Asylum. (You go right from one haunt to the next; there is no getting into another line.) Like the house, the Asylum is also well themed. From the inmates who grab at you from behind the small slots in the cell doors to a particularly impressive morgue scene, the Asylum is creepy and scary. Insane asylums are a common theme at haunts (maybe too common), but this is definitely one of the better permutations. If anything, we wish it were just a little bit longer.

And is Reign of Terror scary?? YES! Reign of Terror combines live actors and pneumatic props. But the props are not like anything you might have seen before. They will appear from places you will never expect. And the same can be said for the live actors as well. Beware of everything you pass by, because someone (or something) could be waiting for you. And as mentioned before, they put a lot of effort into line control, so that you’ll be able to experience all the scares without seeing the group before you hit the scares first.

With haunts popping up in nearly every mall and parking lot these days, Reign of Terror truly stands out as one of the best-themed, elaborate, scary, and well-made haunts out there. It’s obvious that Bruce Stanton loves Halloween and his haunt. As we were leaving, Bruce was outside, sincerely asking people what they liked and didn’t like about the haunt. This is the kind of attitude we love to see, and we know that it will only lead to a better haunt every year. Bruce also told us that the location above Gold’s Gym in the Janss Mall is permanent, so we hope this gives him even more freedom to do what he does best: terrifying us!