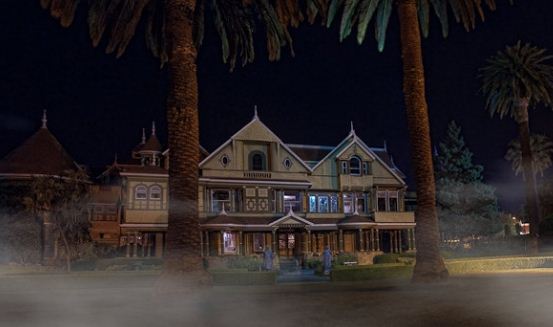 The twisted minds behind the excellent Sinister Pointe haunted attraction (formerly located in Brea, California) have been hard at work in 2011 designing haunts for other locations. They’ve been sharing details via Facebook about some of their projects, and we were excited to hear that they’ve been helping design a brand new maze for 2011 at the Winchester Mystery House in San Jose, California.

The Winchester Mystery House was built continuously between 1884 and 1922 by Sarah Winchester, heir to the Winchester gun fortune, who was convinced that she had to keep building the mansion in order to ward off spirits of those who were killed by her husband’s rifles. The house is 4 stories and 160 rooms, including stairs that lead to the ceiling, doors that open to a sheer drop, and a repeating motif of the number 13. The house holds tours year round and features a nighttime “flashlight tour” in October. Some claim the house is actually haunted, and they play up these stories to attract tourists.

Sinister Pointe did not give any details about the haunt or where exactly it would be located, but there’s no way the haunt will be in the actual Mystery House itself. The house is a mansion and includes things like gold chandeliers and impressive antiques. So don’t expect to be walking through those halls waiting for a monster to jump out at you.

Sinister Pointe also claims to be working with Horror Hall haunted house in Scranton, Pennsylvania. And of course, last year, they helped the Queen Mary completely revamp their Halloween offering into a great, scary event. Check out our 2010 review of Queen Mary’s Dark Harbor.

We just hope that with all this consulting, Sinister Pointe still has time to bring their own haunt back to Southern California this year.