The Blumhouse of Horrors is located just a stone’s thrown from the heart of Downtown Los Angeles’s busy entertainment center, L.A. Live, in a 1923 building known as the Variety Arts Center. Over the years, this historic building has served as the home of the Los Angeles Playhouse, the Friday Morning Club, and even the setting for much of the action in Scream 2. With all of this history built in, the creators of Blumhouse of Horrors have smartly incorporated history and theater into their new haunted attraction, creating a one-of-a-kind, scary haunted house filled with magic and atmosphere. 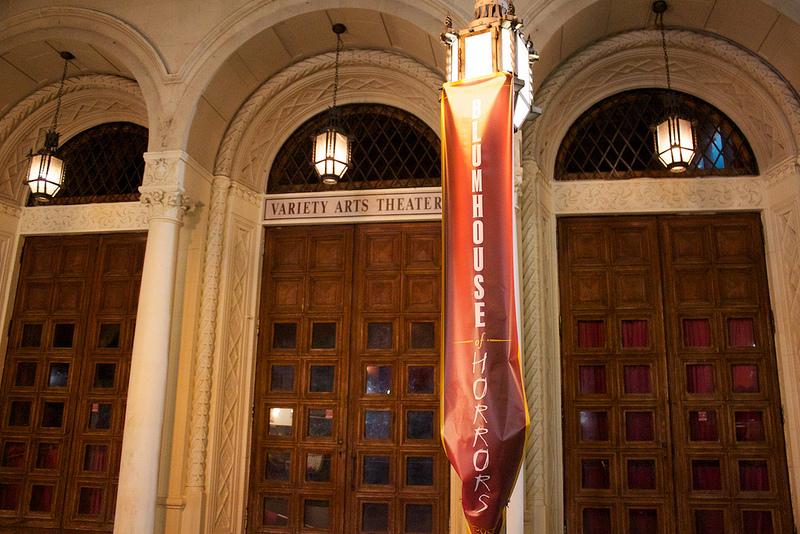 Upon arriving at the Variety Arts Center, we were immediately terrorized by actors out on the sidewalk. These actors were full of energy and got a lot of scares from people in line for the haunt–and poor souls just walking by on their way elsewhere. After purchasing our tickets, we were allowed inside the lobby into another line. The lobby is beautiful and heavily themed to the haunt. Posters of Magii the magician adorned the walls, a live band played in the balcony above, and an old man shouted down to the crowd from the other side of the balcony, explaining the sinister story of the magician and his ill-fated assistant, Sadie. There was even a real magician performing card tricks while we waited in line. This kind of thoughtfulness regarding queue entertainment is usually the sign of a high-quality haunt, so we were excited to see what the rest of the attraction would have in store for us. 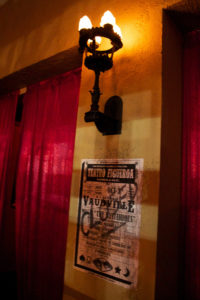 Blumhouse of Horrors has an extensive backstory involving “one of the world’s most twisted dark art magicians,” who, many years ago, performed a disappearing act on stage that ended tragically for his beautiful assistant. As we proceeded through the attraction, the curse of the theater and the elements of dark magic emerged, and we became acquainted with the magician and his cohorts.

The haunt takes guests through many levels of the building, and even outside into the alleyways. Each room and passageway is incredibly themed and detailed, and there is an abundance of lighting, sound, and fog/wind effects that really punch up the experience to create a fully immersive environment. The actors were really great as well. Often, haunt actors can come across as amateurish or corny, but most of the actors at Blumhouse seemed like seasoned performers. In fact, in one scene, when an actor asked us, “What are you doing down here?” her confusion seemed so genuine that we wondered for a brief second if we did actually go the wrong way.

The haunt takes you through the backstage areas, through the alley, up and down elevators and stairs, into the magician’s rooms, into the main theater, and even onto the stage itself. In some rooms, actors stop and interact with the group, but other parts of the haunt are like a traditional maze, where guests wind their way through the scenes while actors hide in the shadows or behind props to jump out and startle. This combination of dramatic scenes and traditional maze is unique, but it did lead to a couple moments of confusion, where we encountered an actor and weren’t sure whether we needed to stop and wait for something to happen or just keep walking to the next room. But these moments were rare, and for the most part, the pacing of the haunt was very well done.

We got several good scares in this haunt, although for us, we enjoyed it more for its incredible atmosphere and elaborate sets than for its scare factor. However, many in our group were screaming and afraid to move onto the next room, so we know that this will be scary to many people. The haunt also has many unique elements we have never experienced before, including a couple of very original scenes and situations at the very end. If you’re looking for a new kind of haunted attraction experience, we highly recommend that you pay a visit to the Blumhouse of Horrors.

Although it’s tempting to compare Blumhouse of Horrors with Haunted Play Presents Delusion, another “dramatic” haunt in Los Angeles, the two experiences are very different. Blumhouse mixes dramatic scenes with standard walk-through maze elements, whereas Delusion is much more of an actual “play,” and Delusion’s stunts are unmatched. There is some guest participation at Blumhouse, but not nearly as much as at Delusion. If you’re a fan of theater, we recommend checking out both Blumhouse and Delusion, as both offer amazing atmosphere and detail, as well as top-notch acting and story lines.