The holidays are almost upon us, so what better time to being planning your Christmas haunt stalking?

Although there are not a whole lot of scary Christmas activities out there, the list does seem to grow every year. When we hear of more Christmas haunts, we’ll be sure to bring you the details.

The Screamont Experiment will re-open December 1st all decorated up with slay bells for the holidays. This multi-level 35,000 sq. ft haunted attraction is loacted inside The Las Vegas Club on Fremont Street and  was designed by the maniacal mind of The Amazing Johnathan. It certainly is not a cover up for some sort of biological disaster in the north tower of the hotel.

Goretorium hasn’t announced any special holiday plans, but the year-round haunt will continue to terrorize through the holiday season and beyond. Click here to see more of our coverage of Goretorium.

Tired of seeing the Nutcraker year after year? Then how about a Boomstick, chainsaw and zombies.  What’s the show that people keep returning to again and again, sometimes yelling the lines along with the actors and sometimes interacting with lines of their own? You might think ROCKY HORROR, but in this case you’d be WRONG. It’s EVIL DEAD THE MUSICAL, the camp comedy that is painting the town BLOODY! Critics, fans, theater lovers, theater haters, and just about anyone who happens to find themselves at the show all agree – this is the best thing since sliced veins! Hot chicks! Dancing zombies! A guy with a chainsaw for a hand! Come get your “groovy” on!

We hear this show in a 4D experience with a “splatter zone” so be sure to check your seats before you buy!

Nightmare (Before Christmas): The Experiment is coming back to town. New York City’s Nightmare haunted house producers, the Psycho Clan, are ready to spread some holiday fear.

This event is described as a “sensory assaulting theatre experience,” the 50-minute interactive show  it runs December 7 through December 23, 2012, at Los Kabayitos Laboratorio at the Clemente Soto Velez Cultural Center (CSV), 107 Suffolk Street between Rivington and Delancey.

Studies have shown that the anxiety of the holiday season, coupled with seasonal depression, heightens the neurotransmitters associated with feelings of fear.  The Psycho Clan plans on exploiting those levels of fear for an adrenaline rushing 50 minutes of twisted holiday pleasure, with NIGHTMARE (BEFORE CHRISTMAS): THE EXPERIMENT. This year has been expanded with all new experiments while taking old ones to a more intense level in this terrifying (and entertaining) examination into the limits of fear. The Experiment takes place in a small lab putting the audience through 10 intense experiments testing a broad range of common fears that people experience. The audience plays the subject in a case study for research on the threshold of fear. Will YOUR limits be hit?

NIGHTMARE (BEFORE CHRISTMAS): THE EXPERIMENT has been created by the Psycho Clan members: Timothy Haskell, John Harlacher, Paul Smithyman and David Hinkle.

Tickets for NIGHTMARE (BEFORE CHRISTMAS): THE EXPERIMENT are $30 for regular performances, and $15 for the family friendly performances on December 22nd and 23rdat 3 pm and are available at www.hauntedhousenyc.com, or by calling 212.352.3101 or at the box office 1-hour prior to each performance.

Times Scare hasn’t announced any special holiday plans, but the year-round haunt will continue to terrorize through the holiday season and beyond. Be sure to check out our review of Times Scare before you go. 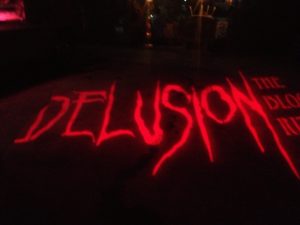 Delusion is extending it’s run due to popular demand, “one final time”! As we’ve shared in our review, Neil Patrick Harris and Jon Braver have created some horrifying magic together as Delusion: The Blood Rite is adding 6 more dates to spice up the holidays between Thanksgiving and Christmas: Nov 30, Dec 1, 2, 7,8 and 9.  Special VIP tickets will be made available giving fans an exclusive behind the scenes tour with creator/director Jon Braver and a chance to join the action in a unique way. If you still haven’t experienced it be sure to go see it ASAP! 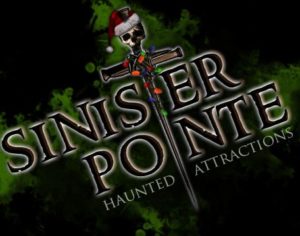 Sinister Pointe reopens this December to bring back their “Not So Merry” holiday haunt. They’ll be open December 7, 8, and 9 as well as December 14, 15, and 16 (7-midnight on Fridays and Saturdays and 7-11 pm on Sundays).

Sinister Pointe is spreading a little Christmas FEAR to all you horror fiends with a NOT so merry haunt. SP will be adding a little dark Xmas flare to our existing haunt with  a few new surprises and a horrible holiday theme. This event is rude and crude! Expect inappropriate behavior, language and insults. If you are easily offended then this specific holiday event is NOT for you!!

It sounds like they are bringing back the drunken Santa and perverted bunny. Read our haunt report from last year’s holiday event to see what we’re talking about. Tickets are $17 for general admission.