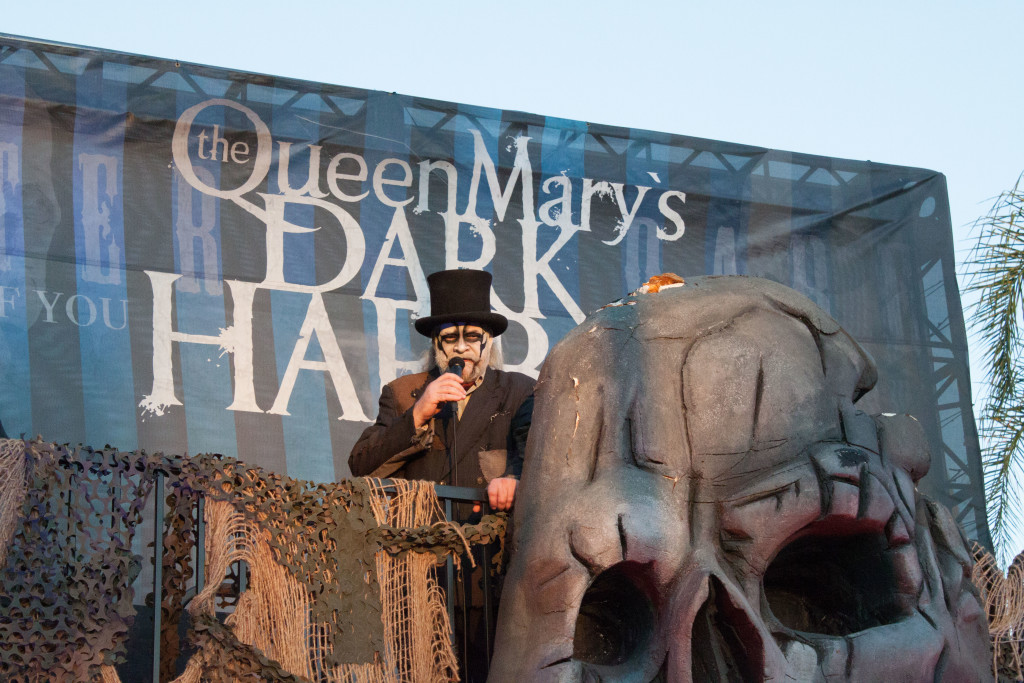 Standing near the private cabanas, listening to the live show taking place on the main stage and enjoying the eerie red lights glowing from the swings above us and the sudden, atmospheric pulses of fire shooting out from the impressive Deadrise attraction behind us, it struck us how downright enjoyable Queen Mary’s Dark Harbor has become over the years. Each year, we write about the impressive mazes and the well-themed and immersive nature of the entire haunt. But one thing we noticed this year is the fact that Dark Harbor is one of the easiest and most relaxed haunt experiences in the area. The small footprint of the event means there’s not a ton of walking or riding escalators up and down all night. Food, drinks, and cocktails are all within easy reach. There are entertainment and food areas that promote an overall atmosphere of fun, but not in the frenetic, overwhelming way it can sometimes be at say, Halloween Horror Nights. And for this 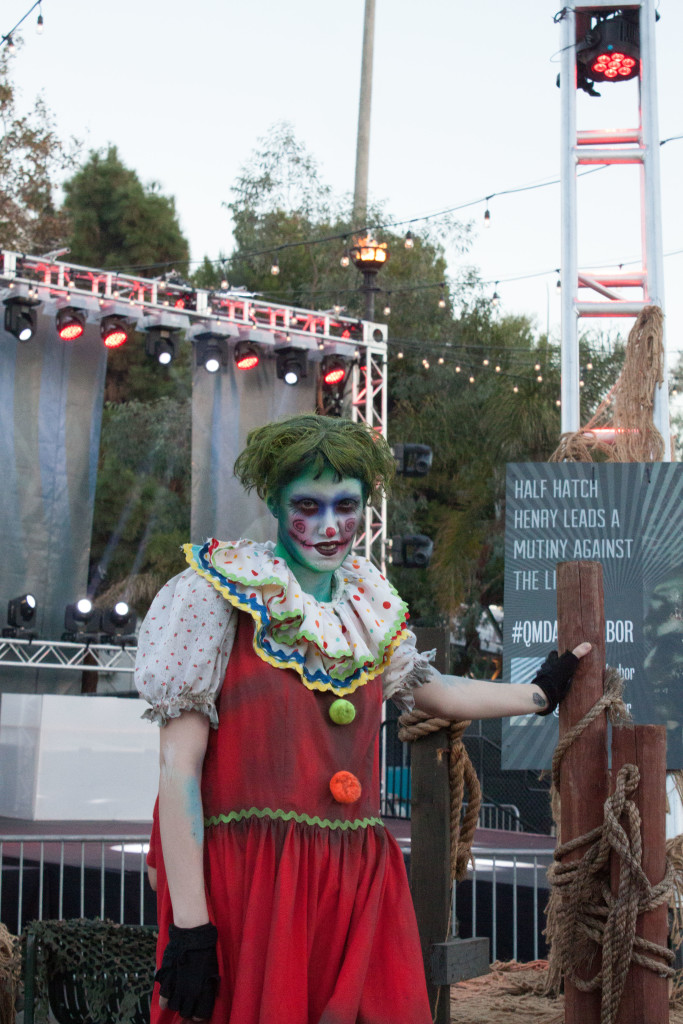 reason, Queen Mary is always one of our favorite events to kick off the season. 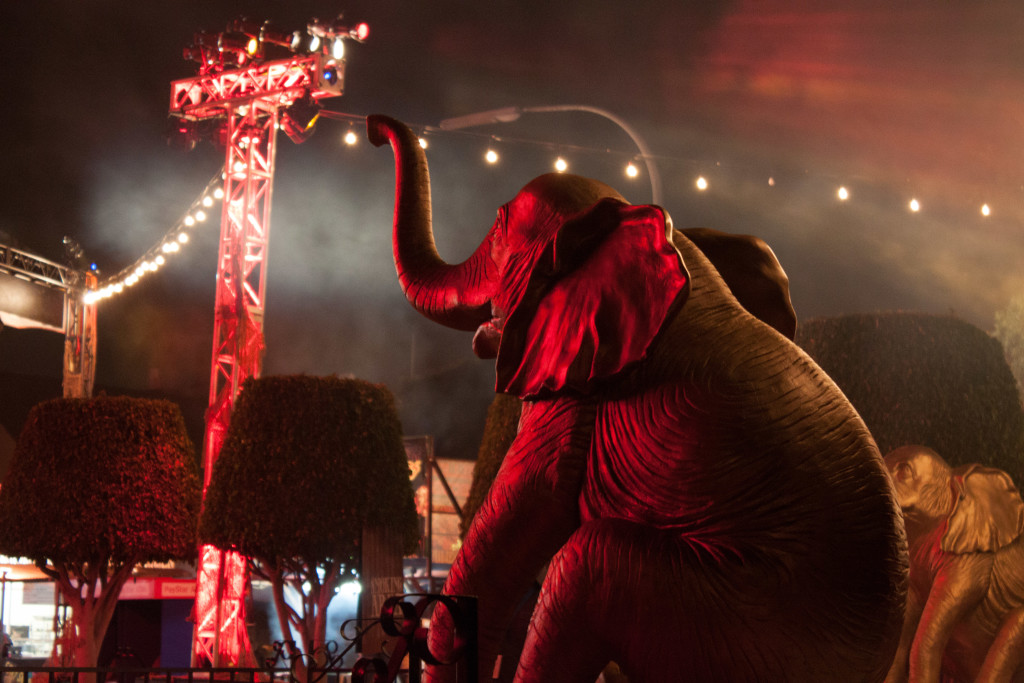 Dark Harbor has a few new offerings this year, as well as several changes to existing attractions. There’s a new maze based on the legend of the little girl who drowned on the ship (“Scary Mary”), the addition of a paintball attraction, and a revamping of the sideshow area. Overall, we felt that the flow of the event was improved this year by the addition of the sideshow area with its own bar, which was the perfect space for lounging and discussing the mazes we had just been through.

Also of note was the addition of some “preshow” elements to the mazes. In Lullaby, the maze begins with a funeral for poor Scary Mary. In Soulmate, a video provides the backstory of Graceful Gale. The queue lines are also peppered with posters that tell the story behind the maze. We definitely love it when haunts really get into storytelling, because it improves the detail and immersive feeling of the mazes. However, the preshow scenes added a lot of wait time to the lines but also helped to give space between groups once inside the maze. Time will tell whether the preshow elements are good or bad for the event. 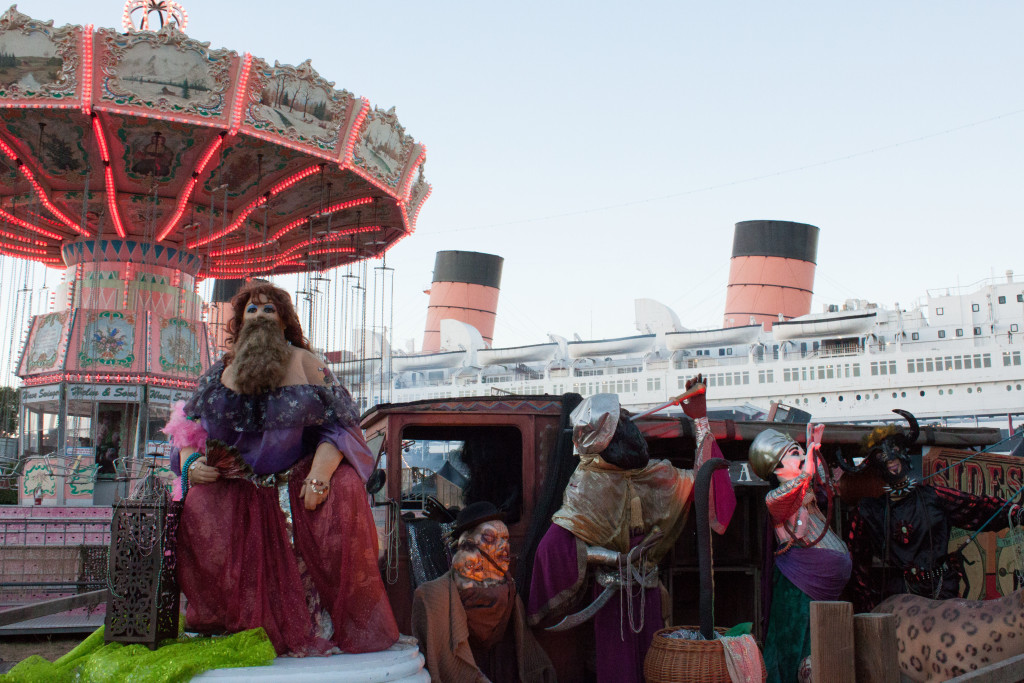 Here are our review of the mazes and attractions for this year.

Scary Mary heads up her own maze in the space formerly occupied by “Submerged.” The water theme returns, however; after all, she did drown in the ship’s pool. The maze begins with a freaky funeral for Mary given by a scary looking preacher;. Various versions of Mary run around this maze, popping up creepily behind walls of water and around corners. In the pool room, Mary called out to us from across the room, her creepy baby voice echoing off the walls. This is a natural progression from the previous theme of Submerged, but overall, we didn’t find Mary to be too scary. 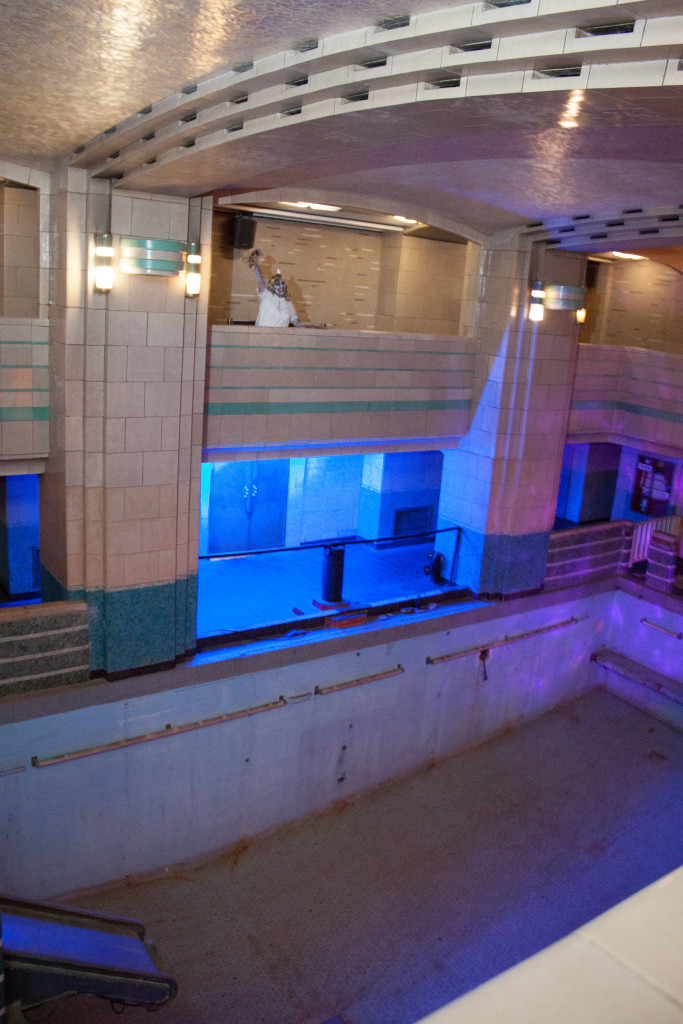 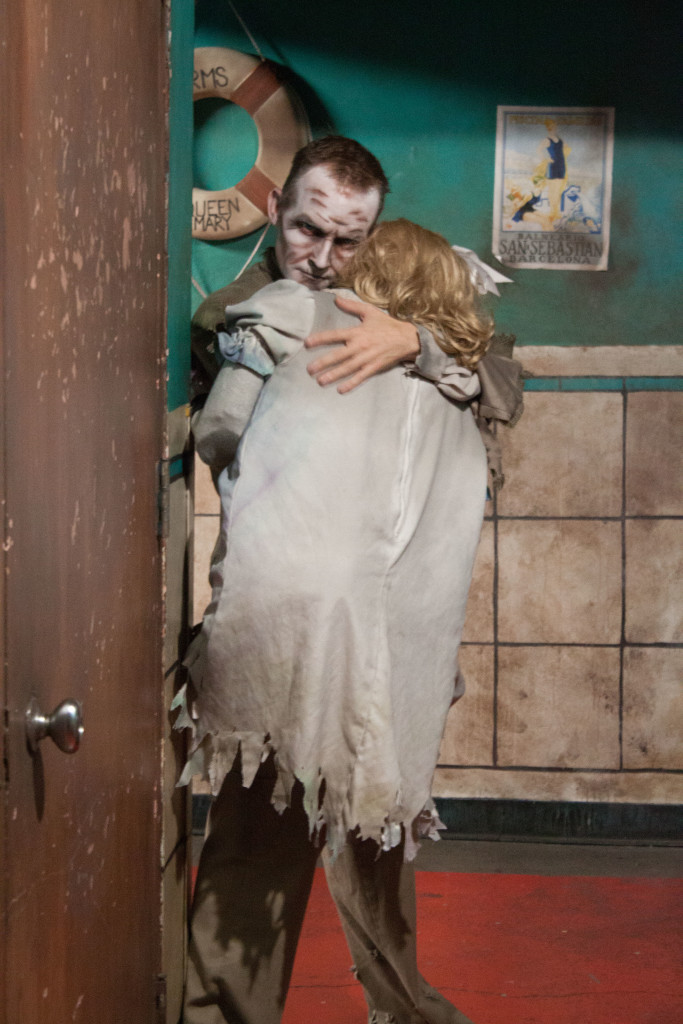 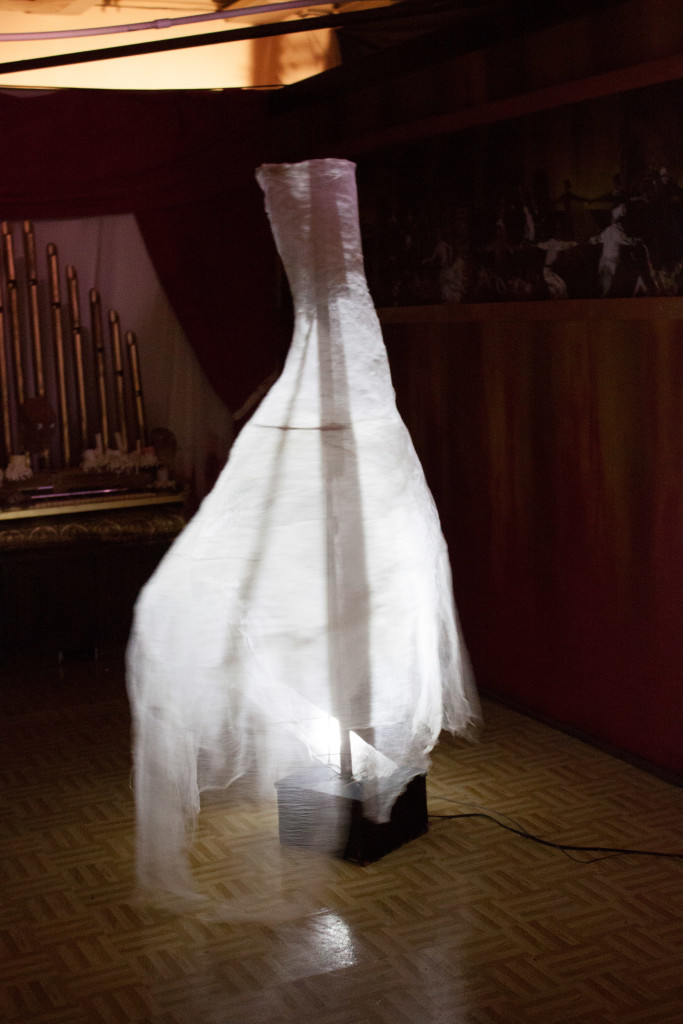 Graceful Gale is the main character of “Soul Mate,” which tells the story of Gale’s gruesome search for the perfect dance partner, which seems to involve severing the various body parts of different men to create one perfect mate. The maze begins with a video that tells the story of Gale in a cartoonish sort of way. Although it was a cool idea to provide the backstory, the audio of the video was very bad and we could barely hear that narration. The narrow corridors of the maze were covered with fabrics in an attempt to make them feel more lush and also to cover up all the metal siding that runs throughout this area of the ship, but many of the scenes feel too sparse and lacking in detail. One exception is Gale’s dressing room, which reveals a creepy Gale gazing at herself in the mirror. There’s also a very impressive ballroom scene, where Gale’s men surround the entire perimeter of room…but which man will step forward for the dance? We got a few good scares in this maze this year, and Gale was looking more creepy (and sometimes more manly) than ever. 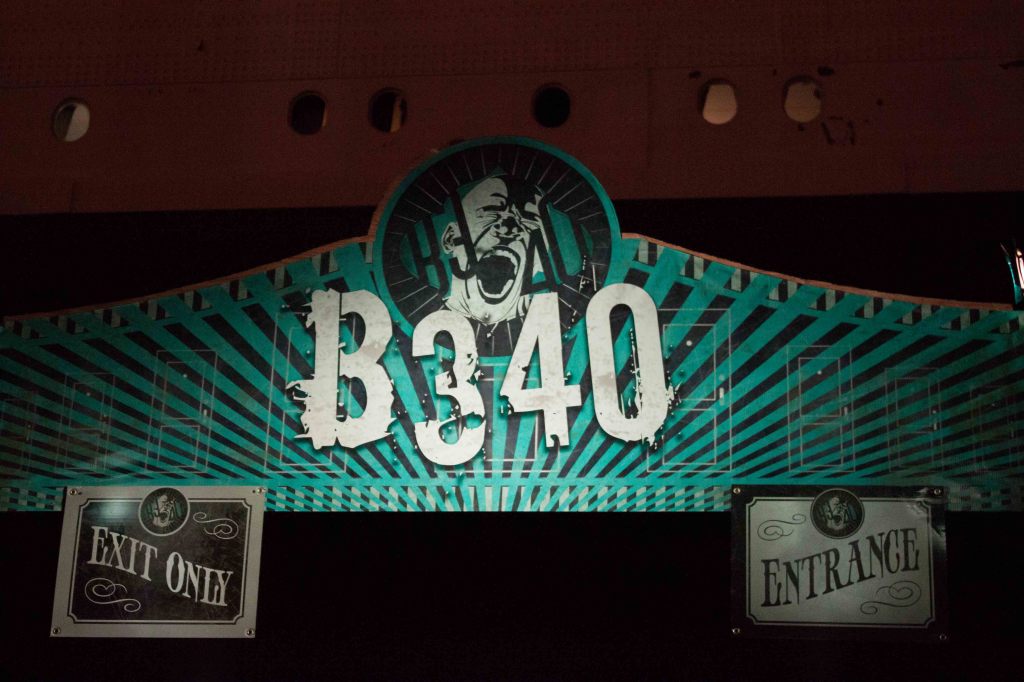 This maze features the story of Samuel the Savage, who was “locked away in room B340 after a violent outburst,” where he was later found torn apart. The maze takes you into the mind of Samuel, where we visit scenes from his past, involving nuns, and also scenes from his insanity, featuring a lot of clocks set to 3:40. They’ve thought a lot about creating a back story here, and it’s interesting and relatively easy to follow. We found this maze to be lacking in monsters this year. Perhaps they didn’t have a full staff on opening night, so we hope more monsters show up for work as the month goes on. 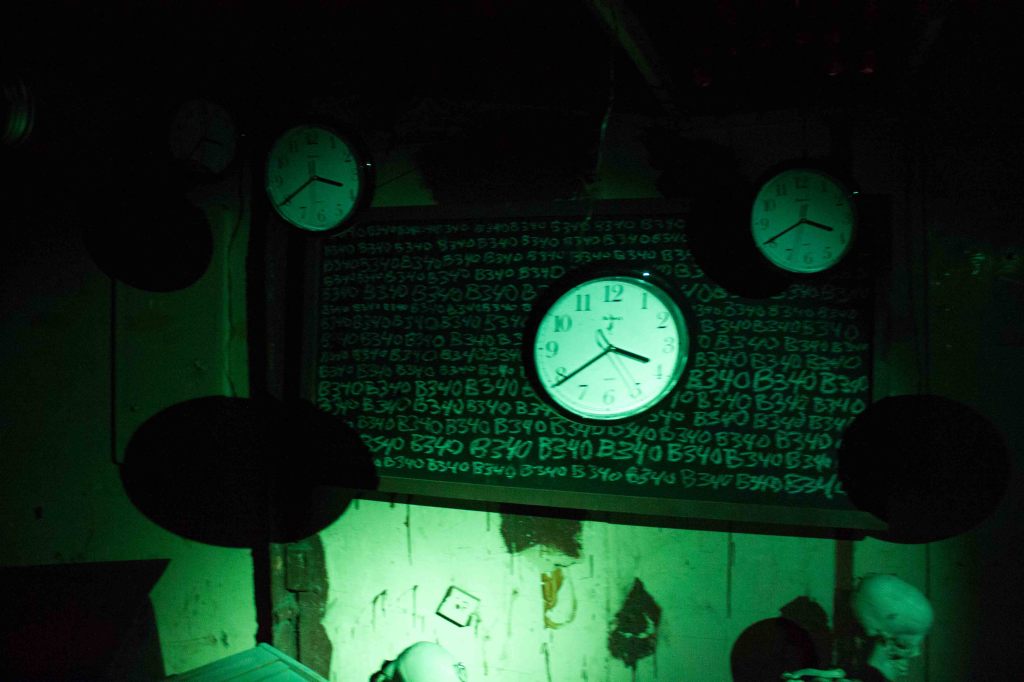 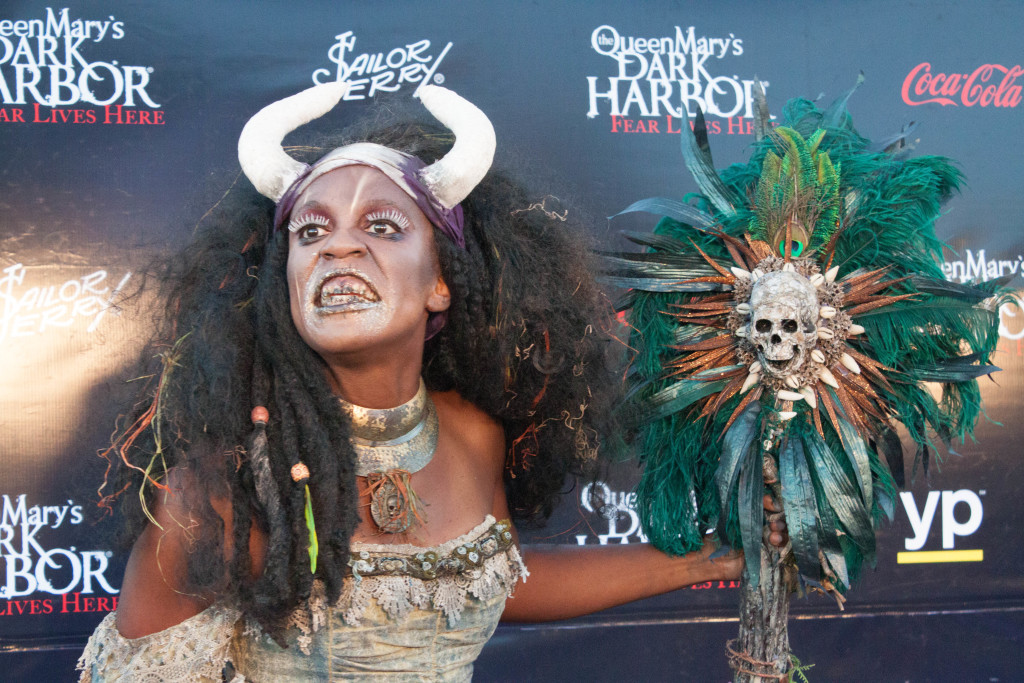 “Voodoo Village” is located on the grounds near the midway. Gypsies and Voodoo practitioners come out from the shadows to assault guests as they wind through this very long maze. The Voodoo theme is a smart use of already existing sets here–interior scenes are easily transformed into voodoo sacrifice altars, and outdoor areas that were already swamp/forest-like settings in previous years now fit the story better. As always, the actors in this maze are some of the strongest and most scary. This continues to be one of our favorites. 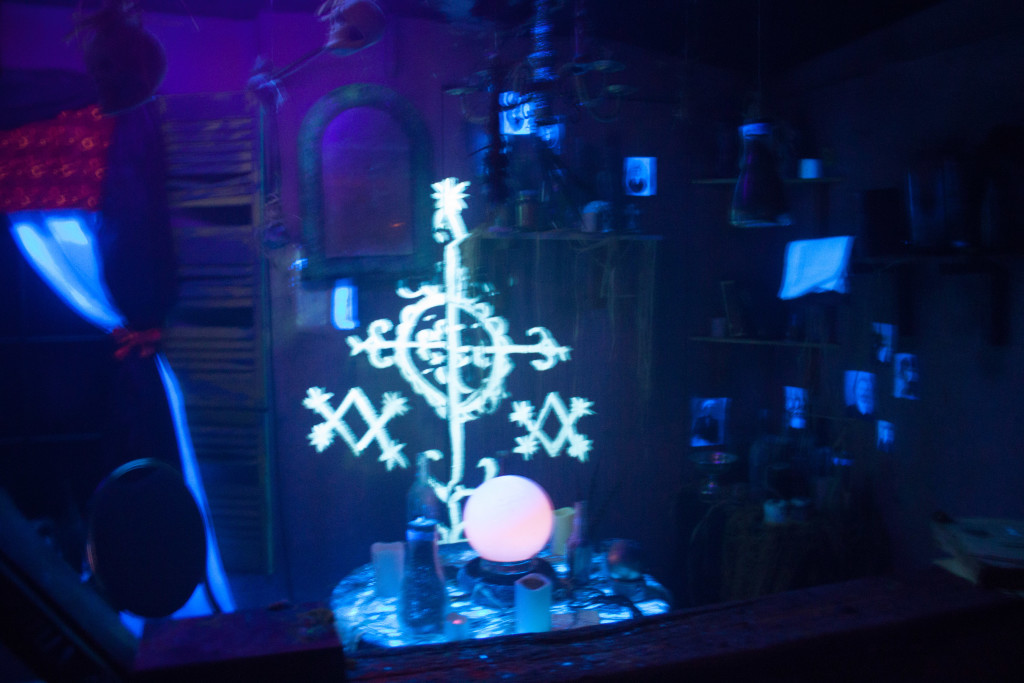 This maze is located inside the dome and has been our favorite in past years. Small changes keep this maze fresh. “Circus” is Dark Harbor’s take on an old-fashioned, early 20th century circus, which makes it feel right at home in the overall theme of the event. There’s an aged feel to the sets, and the lighting casts an eerie, dirty glow over everything. The entrance is through a clown’s mouth, and from there you encounter typical but twisted circus scenes, such as an actual mirror maze you can get lost in and a spinning wheel of daggers. A new scene entailing a “ball pit” seemed very problematic to us. When we went through at the beginning of the night, the plastic balls were up to our knees, and it’s easy to lose a flip flop in here. We heard that by the end of the night, the ball pit was reduced to nothing more than a few balls scattered on the floor, so at some point they must have realized the potential for actual danger in here. It was a cool idea, but hard to execute with the level of crowds that come through every night. The scares were good, and they got us good as we were distracted by the awesome sets and detailed props. 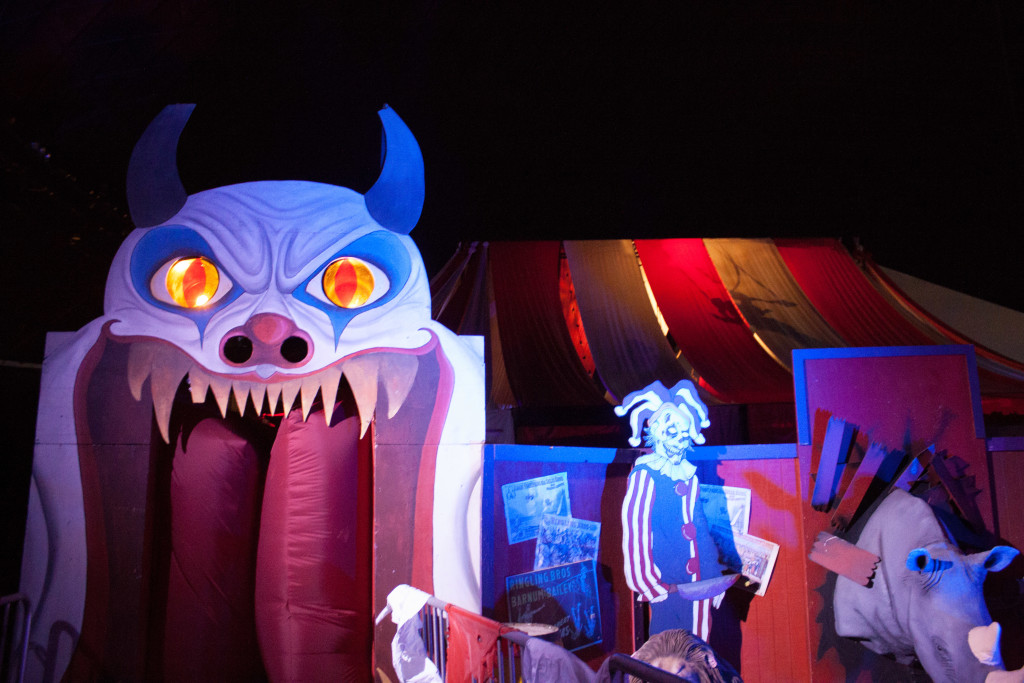 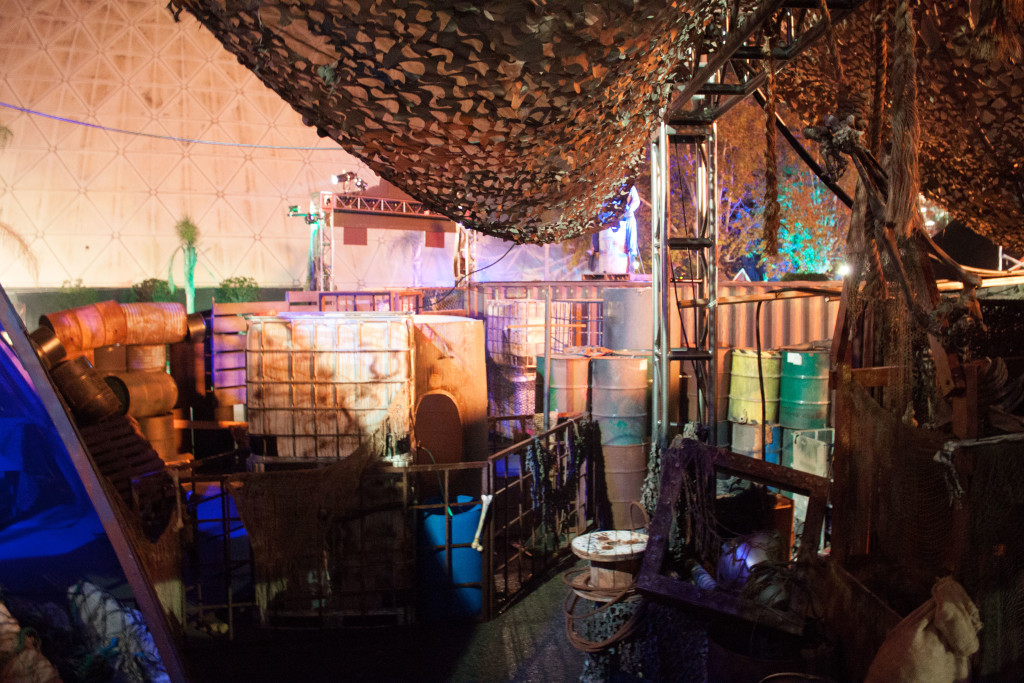 Located in the middle of the Dark Harbor grounds, “Deadrise” is a maze that takes you through an old, rotting ship that appears to be sinking right into the ground. The maze winds through the barracks and bowels of the ship, encountering half-dead sailors who loudly bang on metal barrels with pipes. This maze presented a few new twists and turns (including a choice of path at one point), and the monster are extremely enthusiastic. We actually found this maze to be the scariest this year, as a few tweaks to the lighting and fog effects had monsters startling us from left and right (and over our heads). This is a simple but excellent maze and one of our favorites this year. 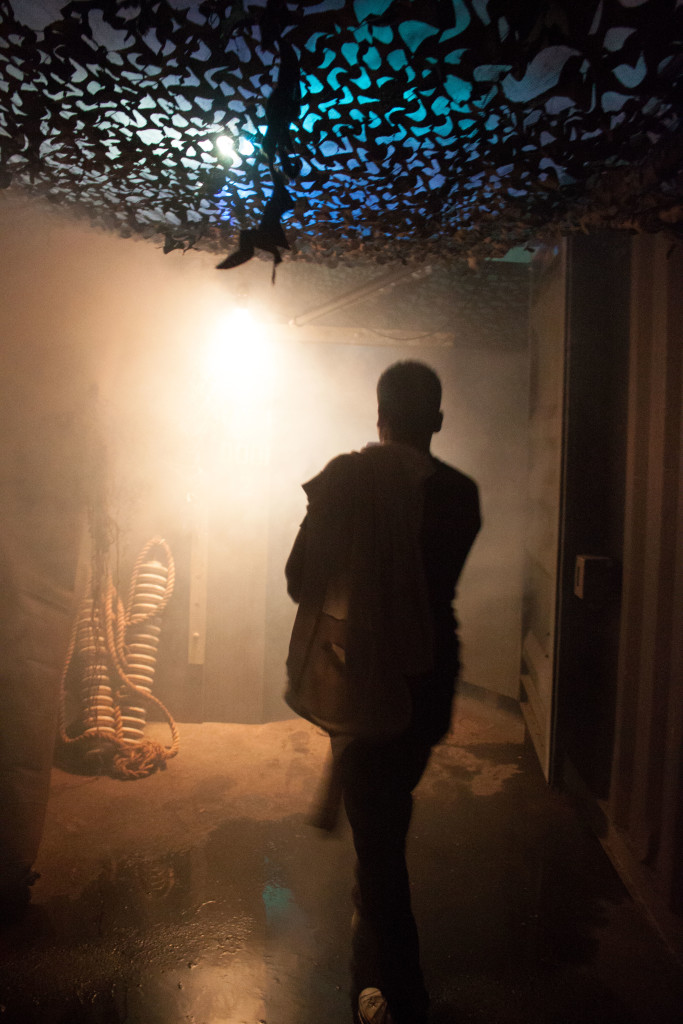 The Curse of Anubis: Paintball Adventure (New for 2015) 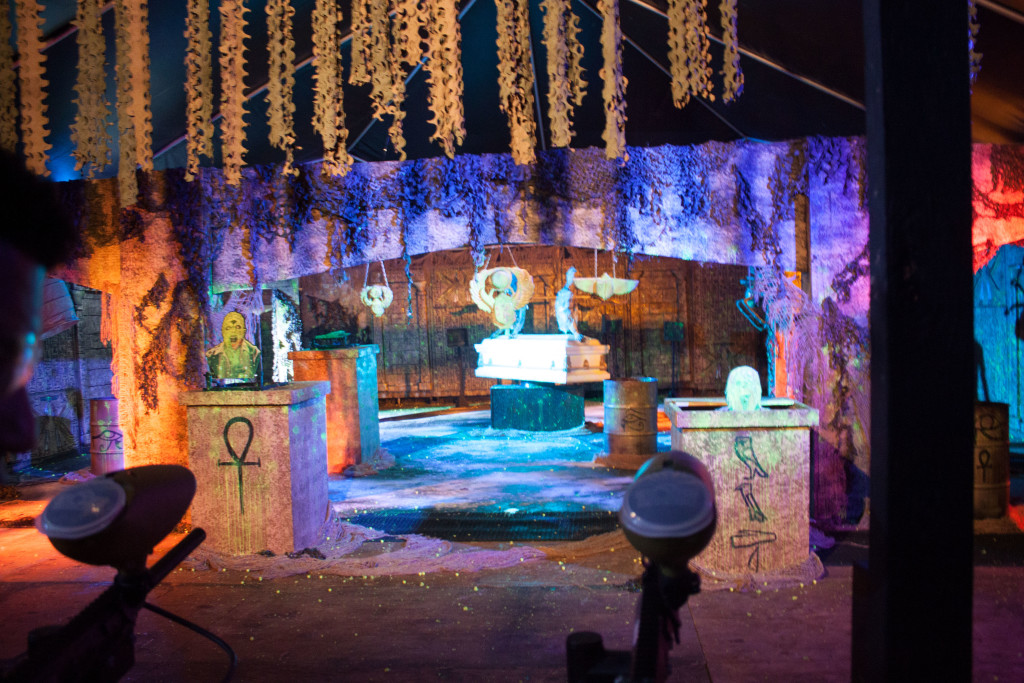 This upcharge attraction features a single room decorated in neon Egyptian style, with a few moving props and—hilariously—some live mummies running around the room. You get only 30 paintballs to shoot, so be careful not to spill your load too quickly. Honestly, we found this attraction to be cheesy and not worth paying extra for. The line also moves very slowly since you have to wait for each group to finish their round.

Side Show: Freaks and Oddities

This is another attraction that’s an extra charge. Once again, the layout has been revamped. Once admitted, you find your way into a sort of courtyard that houses a bar area and small show stage, which is very nice and a great place to relax and have a drink in between mazes. The freaks reside in shipping containers that ring the bar area, and each one has its own entrance and exit. The Shadow Spirit was by far our favorite, as he taunted us from the exit and then scared the shadow out of us once we got inside. 5 skulls to that guy! 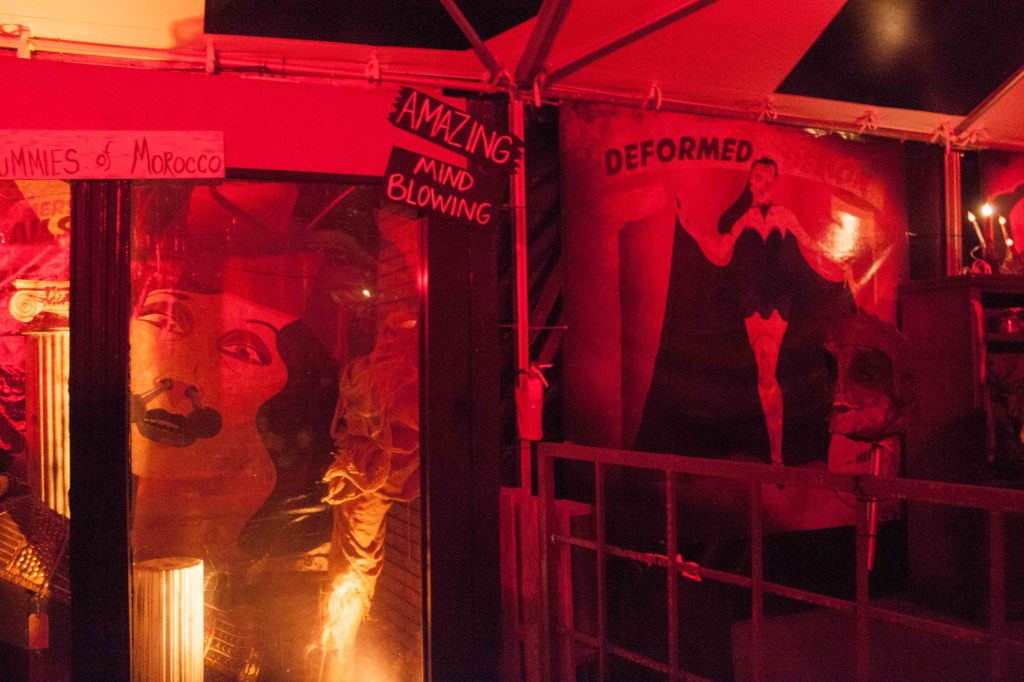 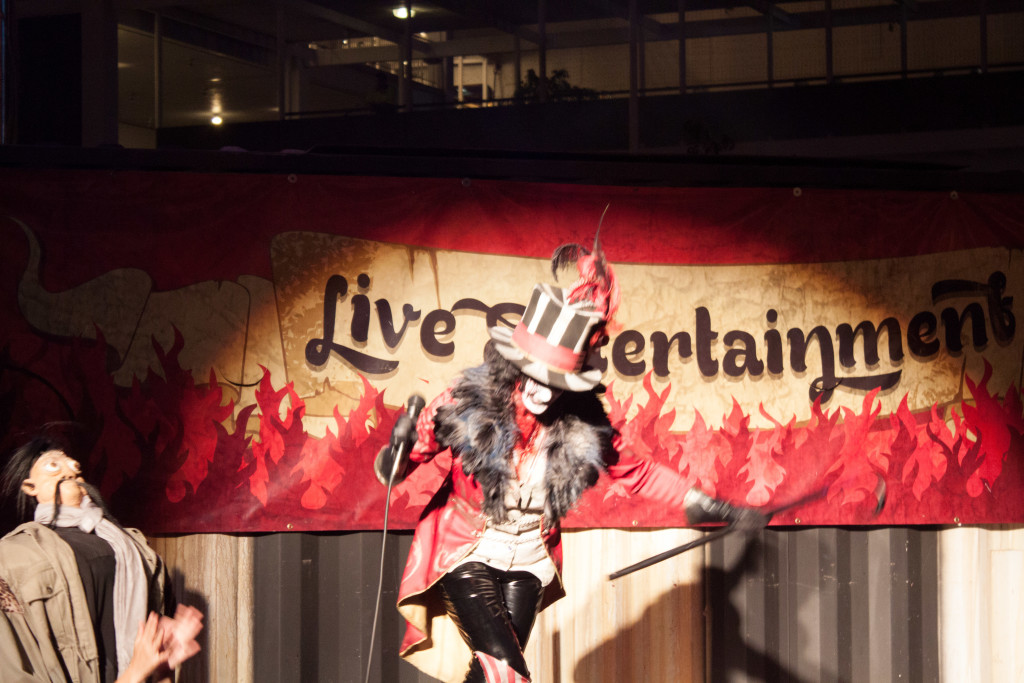 “Deadrise” rose to the top as our favorite Dark Harbor maze this year, winning almost entirely because of the great talent that scared the pants off of us. The new maze, Lullaby, fell a little flat, and the paintball experience is a throwaway in our opinion. The returning mazes remain solid, although we felt there weren’t a lot of monsters this year (which is concerning, since they are advertising “more monsters” in 2015). We definitely recommend checking out the side show area as well.

We found the lines to be very long on opening night, and the addition of the preshows is probably a contributing factor to this. You can always purchase a front of the line pass to help bypass the lines, but we suggest arriving early to beat some of the crowds.