Sinister Pointe’s “Curiosities” shop is a small space in a small strip mall in Brea, and we drove right by it on the way to experience their latest event, “Séance.” But although the footprint of the shop is small, the inside is huge on character and filled with fascinating objects and interesting merchandise. And behind the secret door inside the shop was a special space set up for the séance. 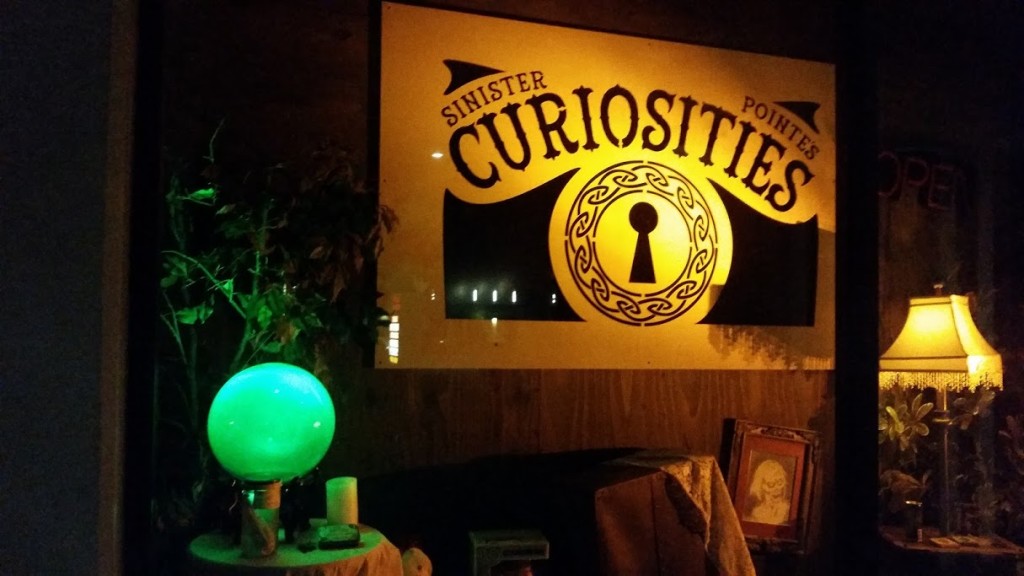 When we arrived, we milled about the shop looking at the various trinkets and eyeing our fellow séance participants. We wondered what exactly was about to happen to us in the next hour. The Sinister Pointe website was purposely vague regarding event details, and the result was that we couldn’t really determine whether this was going to be played up as a “real” paranormal experience or whether there would be actors jumping out at us from behind the curtains. But since this was Sinister Pointe, after all, we didn’t think we’d be able to escape without being terrified in some way.

A creepy looking guy wearing a top hat and cape, and ominously carrying a black rose, chatted us up as we waited for the “show” to begin. He definitely played up the “it’s real” angle, letting us know that we were about to meet a real medium, who would not actually guarantee that anything would happen tonight. He asked us about our own paranormal experiences in the past, which got us into a good mind-set for the evening.

Finally, it was time for us to enter into the séance room. WARNING: From here on out, there may be mild spoilers.

A secret door behind some shelving opened up, and the cape-wearing host purposely split the groups apart and took us two-by-two into the back room. As we entered, we passed underneath some burning sage. He asked us to breathe it in as a sort of “protection” against evil. In the room was a large, circular table with exactly 13 chairs. Each seat at the table had its own occult symbol carved into the wooden table surface (for example, an ankh, a pentagram, the star of Solomon, etc.). LED candles were scattered about. Temporary walls created a small, intimate space, and the room was decorated to look like the inside of an old house, complete with wallpaper, windows and curtains, pictures on the walls, shelves with various trinkets and items, old books strewn about the floor, and a creepy looking doll sitting on a chair. We eyed that doll suspiciously.

We waited a few minutes before the medium appeared. He was a friendly-looking guy with a beard, and he introduced himself. He then went around the table and asked us to recount any previous paranormal experiences we might have had. This was a bit awkward but interesting. He then had us join hands, and he began his first attempt to contact some spirits. Unfortunately, it failed, and nothing happened. Now we were wondering whether this really was some cheesy paranormal ghost-hunting gathering that wasn’t going to amount to much.

Next, our medium tried a few “experiments.” They involved opening a box with some old circus tickets and relating the story of a circus that burned down in the 1940s. Without going into detail, the “experiment” turned into a relatively obvious kind of magic trick that involved switching out some papers. After this followed distribution of some tarot cards, a story about the medium’s grandfather, and an “experiment” with old playing cards. Again, this was a card trick that resulted in an audience member creepily choosing three “6” cards (i.e., 666)—and oh no, did we just summon the devil to our séance?!

Things finally got interesting when the fake tree in the corner started shaking. Finally, we thought, here come some effects. Things happened quickly from there. Concerned for our safety, our medium had us grab hands, and he attempted to tell this evil spirit to leave us alone. Various objects in the room were thrown about. Yes, they were thrown. When they tell you at the beginning to keep your feet on the floor and make sure your chair is as close to the table as possible, make sure you listen! Or you could find yourself in the path of shattering glass or chairs being hurled across the room.

The lights went out, and our demon spirit began speaking to us. This was incredibly creepy and tense. After the intensity of some of the effects that happened with the lights on, we were pretty freaked out about what might happen in the dark. There were a couple of, let’s say, “fourth-dimensional” effects to experience, and then, fortunately for us, our medium was successful in driving the spirit away. The lights came back on. 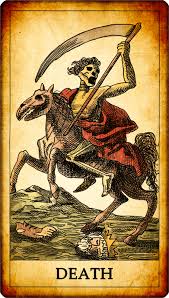 Because the website was vague regarding details, we were genuinely surprised with the direction of the event, and that was a good thing. Without knowing what to experience, our expectations were somewhat low. We think this was helpful because, overall, the event was fun and creepy but somewhat unsatisfying. The beginning was a bit slow, and if you’re not a paranormal “believer,” you may find some of the spiritual rhetoric hokey and laughable. The “magic tricks” were somewhat interesting but pretty transparent. There is a back story about the spirit who eventually assaults us during the séance, but honestly, it was a bit hard to understand. We found the climax of the event to be extremely scary and intense, but for all the build up, it could’ve used a bigger payoff. When the lights came back on, everyone remained seated until someone finally asked, “Is it over?” We feel that almost everyone was genuinely expecting something more. Maybe just that one final “scare” to take it over the edge. However, we do note that we attended the standard version of the show; the midnight version promised to be more “extreme,” so perhaps we should have stayed up late for that experience.

The séance set itself was lovely and well made. As veteran haunt goers, we were, of course, scanning the room for what the “effects” would be, but they were extremely well hidden. The medium played his part very well. And for an event in a confined, single-room space where all guests remain seated, the variety of experiences, the build up to the climax, and the scare factor were pulled off very well. Every guest was part of the story and experienced some kind of interaction.

Overall, Sinister Pointe’s Séance was creepy, scary, and most of all, fun. With a few tweaks, it could have been a pretty epic experience. We are very impressed with what they accomplished in the back room of their small shop, and we can’t wait for the next event.