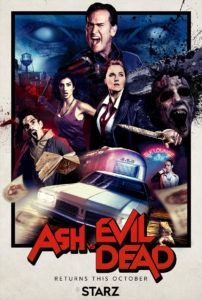 Back in 2013 mazes based on  the remake of the Evil Dead terrorized guest at Halloween Horror Nights (HHN) Hollywood and Orlando. At the time Evil Dead was a theme that more fans had requested be turned into a maze than any other. However, what fans really wanted, and never got, was a maze based on the original movies starring Bruce Campbell. Well groovy fans, Ash will finally be hacking and buzzing his way through demonic creatures in all new mazes at both HHN events.

The 2013 Evil Dead mazes were fun but were obviously deigned to promote the movie which was out at the time. These mazes had lot of special effects eye candy recreating key scenes from the movie, down to the dramatic rainstorm at the end. Yet the maze just wasn’t very scary enough (to us) with predictable scare tactics and more props than scareactors. It also lacked the spirit(s) that made the classic movie so greatly terrible with its campy effects and of course Bruce Campbell playing the deadpan hero, Ash.

Ash Vs. Evil Dead: Trail of Carnage, will join the Walking Dead and American Horror Story as  HHN mazes based on popular television series.  Premiering at both Universal Hollywood and Orlando guests will come face-to-face with some of the iconic possessed people and objects straight from the show. The mazes will take guests through the town of Elk Grove, Michigan, and up-close-and-personal with memorable characters from the first two seasons of the series.

This should be a fun addition to HHN and we hope that these mazes are able to create some special haunt effects and ratchet up the scares.