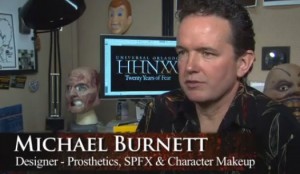 During Monsterpalooza 3, we attended the Halloween Horror Nights (HHN) makeup secrets session “Creating the Fear,” which featured Michael Burnett, Senior Designer and Makeup/Prosthetics Artist for Universal Orlando. The session was the last of the evening, but being about HHN, many attendees were willing to stay around for it. While we were hoping for some previews of what to expect at this year’s haunt, Burnett’s presentation was more of a nostalgic look back at HHN haunts from years past along with a presentation about what it takes to develop the scareactor masks and designs.

Before going to Universal Studios Orlando (USO), Burnett had worked at HHN in Universal Studios Hollywood (USH) from 1997 to 2001.  He also has an impressive resume of makeup effects for many Hollywood movies and television shows, including Evil Dead 2 (*hint*) and House of 1,00o Corpses, to name a couple. Having worked at both parks, Burnett offered some interesting background on the origins and relationships between the respective HHN events. Over the years, there has been some obvious and some not so obvious sharing of ideas between USO and USH, with the most obvious (and recent) being in 2007 when both parks featured New Line’s killer lineup of Jason, Freddy, and Leatherface. The less obvious are HHN Hollywood’s Eyegore Awards, which are named after an icon that originated in Orlando. 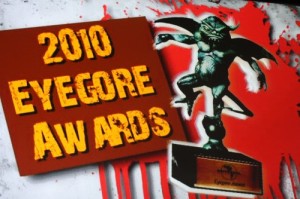 For Orlando, Burnett stated that they want their mazes to be a motion picture experience. However, unlike Hollywood, they don’t solely rely on movie-based themes for their mazes. They seek to have houses with linear story lines that can be incorporated into a theme headlined by an original icon such as Jack, The Storyteller, and Burnett’s favorite, Bloody Mary.

Taking a look at what it takes to “create the fear,” Burnett stated that the preparations for HHN on both coasts is a year-round process. They usually take a brief break right after October and then begin the designing and planning process for next year’s event. Starting in July, they have open interviews for makeup artists at USO, while USH outsources its makeup effects to Boneyard Effects. Burnett mentioned that if someone is interested in being an artist for HHN Orlando, they just need to bring their resume and portfolio to the open interviews.

Looking closer at the actual makeup process, Burnett shared some details on the mask designs. 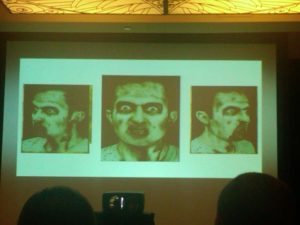 Many of the characters have sculpted masks, which are mostly made of silicone. While silicone is now popular because it’s soft and can move with the actor’s movements, for bigger masks, they use latex because it’s lighter to wear. For some of the scareactors, they also use prosthetics, which are artificial device extensions that replicate moving body parts. Seeing the examples of his work gives a glimpse at the talent and time needed to bring the fears to life. He proudly boasted how in 2007, the New Line executives mistook the HHN character designs for the Friday the 13th, A Nightmare on Elm Street, and Texas Chainsaw Massacre mazes to be from their own studio prints.

Once the character designs have been created, the team of artists must be able to effectively and efficiently prep all of the actors. Interestingly, the individual makeup artists have some creative liberty in applying the makeup as long as it’s in line with the theme. During HHN, they have 4 to 5 makeup areas throughout the park, and applying the makeup can take any where from 10 to 45 minutes. 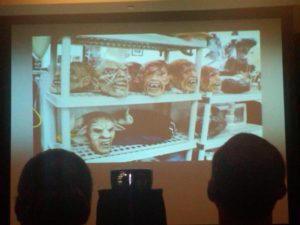 The development of masks and the makeup process is no small feat and is often a part of the haunt many of us don’t spend much time thinking  about. After seeing Burnett’s presentation, we have a new level respect for the people behind the scenes who are working hard all year round and every night during HHN to make sure the  scareactors are looking as realistic as possible. We suggest this year, if you can keep your eyes open, to take some time to look at the details of the fears Burnett and his team have created.