Around the corner from Disneyland Resort, in the shadow of The Tower of Terror, lies an even more terrifying place called The Empty Grave Haunted House. Located at the Anaheim GardenWalk, The Empty Grave is a seasonal attraction featuring live actors, custom special effects, and in-your-face animatronics. We last visited the Empty Grave in 2009, and back then we found it to be rather… empty (rim shot please). Since we were in the area, we thought we would stop in to see if the haunt had evolved over the past 3 years.

When we arrived we encountered energetic monsters sliding out of the corners of the mall frightening people and scaring up business. While waiting in line, the monsters roamed through the crowd thoroughly stalking guests and building up the excitement. It was ironic that some of them were wearing the same masks we had just seen over at Sinister Pointe. Nonetheless, these monsters really were great at building up the tension with their pre-show antics.

The theme is rather simple but effective. It’s essentially a journey through an old cemetery with ghosts, the undead, and creatures from beyond trying to get victims to refill the empty graves. The design of the maze is well done with a blend of open and closed-in spaces. It’s also filled with fog… a lot of fog, and throughout there’s transitions between dark and light spaces, which at times is disorienting. There were some impressive sets including the creepy mausoleum, which is filled with some unexpected surprises, and there’s also a moment where you have to “find your own way out.”

What impressed us most about The Empty Grave were the monsters. We have to applaud these ghouls and gals who were really into their roles and did an outstanding job of consistently scaring us. Since you can only go through with your immediate group of “loved ones,” the monsters have an ample amount of time to give guests special attention and attack multiple times. They also used a variety of scare tactics, and some were very athletic, jumping and sliding at us. Others were imposing and threatening. And there were even a couple comical monsters who taunted us and helped to alleviate the tension, for a few seconds.

Overall, we were quite impressed by the upgrades made to The Empty Grave over the past few years. They have good talent, and it’s evident that the entire team behind the haunt “scare because they care.” So, if your’re planning to visit Disneyland to take in Halloween Time or are in the O.C. Haunt Stalking other haunts you really should include a trip to The Empty Grave Haunted House in your scare-itinerary.

Terror Tips: *Parking is free for 1 hour at the GardenWalk *Check Groupon for discounted tickets *Arrive within the first hour of opening for the shortest wait time. 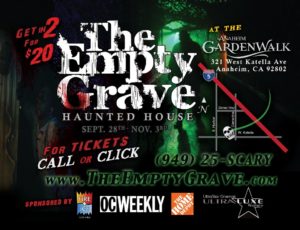