Dark Harbor at the Queen Mary (Long Beach, CA) is increasing the fright level of its popular event this year with a brand new maze,  “spirit character,” freak show, and additional circus-themed mini-attractions.

New for 2013 is the appearance of “The Ringmaster,” one of the spirit characters who inhabit the mazes/grounds of the Dark Harbor event and who  will preside over a brand new maze, fittingly called “Circus.” The maze, featuring “a terrifying MAD house will disorient guests’ illusions through fatally horrific magic, paranormal wonders and spirited thrills like never before seen.”

In addition, Dark Harbor will also have a freak show and a “new Coney Island inspired vintage circus ride ‘ferris-squel,’ mini mazes and chilling side shows.” It seems like the event grounds will have an overall circus theme to them this year. Queen Mary has done a great job in recent years of theming the grounds with nautical props and sets, so a refresh with a circus theme will be interesting.

The Circus maze will be located inside The Dome, and will replace “The Cage.” The Cage was one of Scare Zone’s favorite mazes, so we’re sorry to see it go. The Cage had a frenetic, disorienting, and minimalist feel that was unique and actually very scary. We applauded Queen Mary for taking a chance on such an odd maze and successfully pulling it off. We hope that Circus can match the level of the The Cage and not fall into the traps of a generic clown/carnival theme.

So far, at least from the Ringmaster character photo on their web site, it appears that Circus might have an older, more grungy and demented feel to it, rather than resorting to neon colors and cheap 3D effects that permeate so many other circus-themed mazes. This is very promising, and we like that they’ve taken the time to really think about the overall theme of their event, including the era and location, to bring us a circus character that seems to fit in very well with the other characters and mazes. We can’t wait to experience this in person. 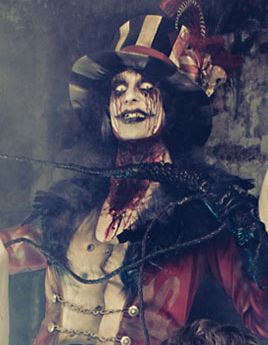