Scare Zone goes Inside the “Scareactors” Studio for an interview with Mario D. Gaitan, one of the actors who played “Jason” in the Friday the 13th maze at Halloween Horror Nights, Hollywood. As our readers know, Scare Zone ranked the “Kill, Jason, Kill” maze as one of the scariest of 2010 and the scareactors as some of the best of the year. So we were really excited to get the chance to interview Mario to get the inside story of what it’s like to terrify guests every night at Halloween Horror Nights.

Scare Zone (SZ): In the Friday the 13th maze, which scene were you in? What was your scare?

SZ: Were you a fan of haunts before you became a scareactor?

SZ: Why did you want to become a scareactor and work at HHN?

Mario: I LOVE scaring people. It’s something I do just for fun. I do it at work, at home, and even to strangers! I just love seeing people scared, it’s a rush.

SZ:How did you get selected for the role of Jason? Was there an audition process?

Mario: There was an audition for the role. There were about 12 people auditioning at a time, and we each had to show how we would scare. I was told that I was selected because I resemble Kane Hodder’s version of Jason. I’m 6’5″, 270 lbs.

Mario: The scareactor training was pretty cool. We would go into an auditorium and have John Murdy explain his vision and show us clips from the movie. We then go to our spot in the maze and John Murdy shows us the way the scare would be, then we would make it our own. It was very helpful.

Mario: The first year I played the role, I bought the Friday the 13th collector’s set. I saw all the movies, and to me, I like them all except Part 5 [A New Beginning] and Jason X.

SZ: Do you get the freedom to make the Jason character your own, or do you receive specific instructions on what you can and can’t do?

Mario: We get instructions on what not to do, for example, Jason NEVER speaks, no two Jasons should be seen at the same time, and we have to take our masks off if we leave the maze. Other than that, we make Jason our own.

SZ: We thought that last year, all the Jasons had a really scary, menacing demeanor that was just terrifying. Do all the Jasons in the maze work together to keep the character consistent, or was that just a great coincidence?

Mario: We all do our best to keep the scares consistent. We want everyone to get scared. If I couldn’t scare a guest, then I can count on my other Jasons to scare that guest.

SZ: What advice would you give someone who is thinking about becoming a scareactor?

Mario:The advice I would give the scareactor is to be consistent. Don’t blow all your energy the first couple of hours; pace yourself.

SZ: What is the best guest reaction you’ve ever had in the maze?

Mario: One of the best guest reactions I’ve had was when I made someone faint. It was great! She was looking behind her and when she turned forward, she saw me and I gestured like I was going to grab her throat and—SLAM—she hit the ground. I LOVE scaring the “tough guys.” It’s funnier when they scream. I’ve had guests not finish the maze because they got so scared. It feels good when I hear a guest say that I look like the real Jason.

SZ: Have you ever been punched, kicked, or otherwise assaulted after scaring someone? Can you describe what happened and how you handled it?

Mario: I’ve been punched before; it’s kinda funny, though. It’s almost always after I’ve scared the guest. There was this one time where I scared a couple, and the guy got so scared that he punched me on my chest. So what I did was slowly look at my chest then look at him and start walking towards him. That made him even more scared! There was another time where a guest hit me and I started getting angry (I was in character, of course) and started hitting a prop violently, and I heard the guest say, “Oh my gosh, you pissed him off.”

SZ: How do you pick out the best “victim” in a group? That is, can you tell who will and will not be a screamer? And do you always go after the obvious target, or do you try to scare the tough guys as well?

Mario: I pick out the ones who are distracted or aren’t paying attention. If they’re in a group, I either scare the first person, the last person, or the one who is looking down. Mostly “tough” guys and kids are my favorite. The girls are on top of the list, of course.

SZ: What kind of guests do you hate the most, or are the most annoying or difficult to deal with?

SZ: Did you ever see any celebrities come through your maze? Did you have a chance to scare any of them?

Mario: I’ve seen a few celebrities come through the maze. I’ve seen Johnny Depp, Derek Mears [“Jason” from 2009’s Friday the 13th], Robert England [“Freddy Kreuger”], Jessica Simpson, Steven Spielberg, Corey Feldman, Danielle Panabaker [Friday the 13th, The Crazies], the producer and director of Friday the 13th 2009, and many, many more. I’ve scared quite a few of them, and some I made them go “awwww, that was AWESOME!” It felt great when I stood toe to toe with Derek Mears.

SZ: We heard a rumor that Elizabeth Taylor came to HHN in 2009 with Michael Jackson’s kids! We can’t even imagine her going through a maze.

Mario: Well, I also heard the rumor of Elizabeth Taylor coming through the maze with Michael Jackson’s kids. We were told to NOT scare her because she recently had heart surgery. We closed down just for her to just pass by the maze. Honestly, I didn’t see her. I don’t think she came though the Halloween maze. We were looking forward to seeing her, but I guess she didn’t come through. 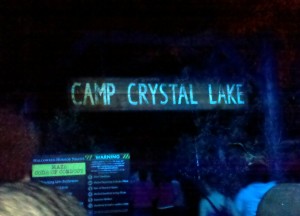 Mario: In my opinion, I think 2010 had the best Friday the 13th maze. Jason was able to run, the scares were better and more extreme. Imagine a 6’5″ 270-lb. hockey mask–wearing guy running towards you with a machete! That’s pretty scary, I’d say.

SZ: What do you think is the best time for a guest to visit a haunt—early in the season (such as the first couple of weeks, when the actors are still fresh and getting used to their roles), middle of the season (when actors have hit their stride), or closer to Halloween (when scares have been perfected)?

Mario: I say the best time to go to HHN is some time between the middle and the end of HHN. We have the role paced and we know what works and what doesn’t. We’ve gotten used to our cardio and are able to last longer. Our energy level is through the roof!

SZ: Do the actors get worn out by the end of the season, and would that affect the guest’s experience?

Mario: There will be a time when actors get worn out, but as soon as we hear those screams, we get a burst of energy.

SZ: Did you have a chance to go through any of the other mazes at HHN? If so, besides the Friday the 13th maze, what other maze at HHN was your favorite?

Mario: I was able to go to all the mazes at HHN, and besides our maze, I liked House of 1000 Corpses in Zombie Vision. They used the 3D to their advantage, and they got pretty good scares at times.

Mario: All I know is that HHN 2011 will be bigger, better, and more extreme. I hear that John Murdy wants more mazes.